And Now It's Time to Put It Away Over the Summer

"Yarn, needles, and me,
Then knitting I'll be,
And in the end I'll be happy in
My Blue Sweater."

[with apologies to Walter Donaldson and George A. Whiting, who wrote "My Blue Heaven"] 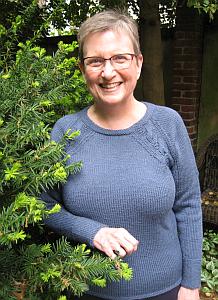 Yesiree, the person who has only finished four sweaters/tops in her knitting life (and one didn't work out at all), finished a sweater!

Project:  (I'll Be Happy In) My Blue Sweater
Pattern:  Zadie, by Mercedes Tarasovich
Yarn:  Cloudborn Fibers Highland Worsted, in the colorway Stormy Skies
Needles:  US 5 and 7
Modifications:  No modifications (at least not intentionally!)
Notes:  When I saw The Grocery Girls wearing the sweaters they had knit in this pattern for their show on Craftsy, I fell in love with the cables along the sleeves.  They talked about how simple the pattern was to knit and understand, and said they were doing a KAL so others could knit along, and that Craftsy would have kits on sale for the yarn.  I was busy with other projects, and as you know, I don't have the best record with KALs, but when I saw that the amount of the yarn I would need to make my size would cost only $35.00, I decided to purchase it and see how I did.

I've never made a sweater in this fashion - you knit the body, then put it aside to do each sleeve.  Then you start knitting the body again, knitting the sleeves in as you go, and then follow along until it's done.  You weave in the ends, graft the underarms, and Voila - a sweater! 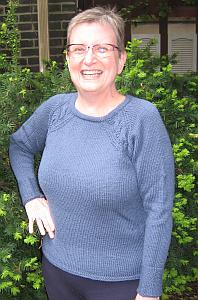 The fact that the Grocery Girls made tutorial videos for it meant that even at 10:00 at night or 5:30 in the morning, help was available.  Watching them really helped with some of the techniques.  The pattern is well-written, but I just wasn't comprehending how some things could be done, and the videos made all the difference.

I highly recommend this pattern, and I liked the yarn as well, but if you have enough worsted weight yarn in your stash, you can just work with that.  I took a long time with it not because it was hard, but because I was interrupted a few times by having to concentrate on other projects or activities. 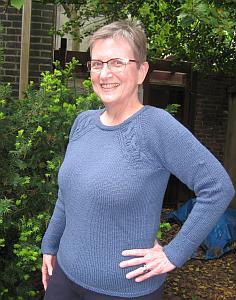 The Tim took these photos for me last weekend, and though it wasn't really all that warm, the sweater was *very* toasty!  But it fits well, I think it looks nice on me, and I can't wait to pull it out next fall and wear it for longer than about 10 minutes.

Look how nice the cable detail on the shoulders is! 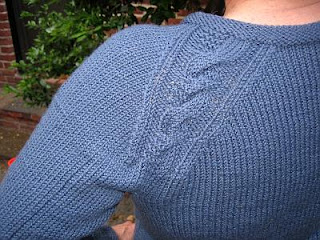 Of course, with every photo shoot there are some outtakes.  Here's mine.  This is just as I was moving towards The Tim to tell him something.  He says it looks like I've suffered a brain injury.  I think it is absolutely hilarious, and I can't stop laughing when I see it! 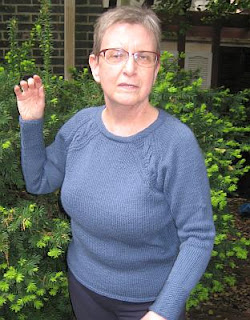 The Tim says if I die in a terrible accident, he'll give the news stations this photo.  He's a real laff riot.

Anyway, the sweater is now put away until cooler weather, and other knitting is happening, so it's all good.  :-)

Whoa!!!! What a spectacular finish. Congrats! It looks great.

It looks perfect at every view, Traumatic Brain Injury notwithstanding. What a great project!

Bravo! Love the sweater and the cables.

I've ordered a few kits from Craftsy, and discovered I don't like knitting with the Cloudborn yarn. The price is right, but the colors seem a bit too "flat" for my taste.

It looks fabulous. Great colour too.
I don't mind a bottom up sweater, but I still prefer top down.

If the awful, awful should happen, I solemnly swear I will make it to your house and delete that last photo so Tim can't send it to the Daily News.

THAT'S what friends are for.

beautiful sweater and the raglan details and patterning is beautiful!! Love the last photo, don't die.

WOW. You really nailed it. I lost it at grafting the sleeve part.....yikes. It fits you perfectly. Your husbands sense of humor although macabe is very funny!!!! I love that you had the grocery girls info at your fingertips when EVER you wanted help!! Hooray for you

Your sweater is amazing. I love that you had the 24/7 help of Grocery girls. Great idea. You nailed it

Congratulations! It looks great on you!

I am in love with that sweater and you did a fantastic job my friend. IT fits you perfectly. I love the last photo, you know I am all about real life and this just makes me giggle.

Wonderful finish Bridget!!! I love it. The shoulder is so interesting. I did try to comment on this post earlier and couldn't get comments to work...grrrrr...

And that last photo? Priceless and hysterical!