A Bit of Catch Up

Hello and Happy Thanksgiving plus 2 days!  I hope your day was enjoyable.  Ours was quiet and very pleasant, though The Tim crashed shortly after dinner, so in some ways it was also short!  But he had been doing every single thing for the day, and I don't blame him for being tired.  We are still enjoying leftovers, so it's all good.

Yesterday was also pretty uneventful, though I managed to get some things accomplished.  The Tim had to work, so I spent the day working on putting some clothes away as best I could, and walked over to a local toy store for a Christmas gift for my youngest great-nephew, since I was afraid if I waited, the ones I wanted would be sold out.  Then I watched a Christmas movie that was so bad and so cheesy, it was good, which was pleasing.

I finally have a few houseplants that are doing OK.  I used to have so many plants, but the light in our house is not the best.  The remaining violets I had kept getting attacked by the Koodle.  So it finally occurred to me that since the plant stands I had were just too accessible, I needed something else.  I bought one of those bakers' racks, and have some plants on the top shelf.  It's in between two windows, but not near enough to either for leaping cats to be successful.  Plus, it looks nice and I'm pleased with it. 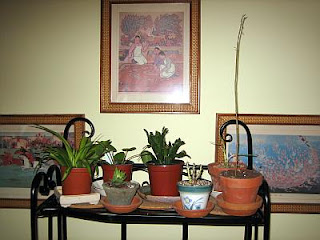 The skinny, tall plant is from an avocado pit.  It seems quite happy, so I'm just going with it and we'll see what happens.  I'm not sure how violets would do here, but might get one or two and test it out.

The plant stand also came in quite handy for this: 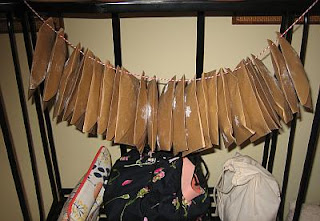 A few months ago, I treated myself to a yarny Advent Calendar from Sweet Sparrow Yarns.  Jaclyn from the Brooklyn Knitfolk podcast had opened a package each day last year in her Vlogmas series, and it looked like such fun and such pretty yarns that I decided to try it.  So I saved up and signed up as soon as the slots opened.  Then I promptly forgot about it, so that when the package arrived, it was fun all over again!

Yesterday I wanted to cheer myself up after having frustrations with my hand/wrist exercises, so I opened the package and took everything out.  The envelopes had a red and white string attached so you could hang them like a garland.  So I attached it to the aforementioned plant stand, and I love how it looks! Now from December 1 through 24, no matter what else does or does not happen in any given day, I have a little envelope to open with a yarny surprise inside!  And it also includes a full-sized surprise skein of yarn to open on Christmas Day, which is just really exciting if you ask me.  I must confess though, that even just the little envelopes, all decorated with snowflakes and a number, on the red and white string, make me smile.

My occupational therapy has been moving along.  It is extremely difficult and very painful, but I am making small progress, so it's worth it.  I have been going twice a week, and then I have exercises to do 3 times a day at home as well.  I see the orthopedic surgeon again on December 3, so I'm curious to see what she'll have to say.  The therapist assigned to me is nice, but she was a little off-putting at first, since she seemed to have the personality of General George Patton.  But I think once she could tell I was really trying, things got better.

Tomorrow I have a haircut appointment (long story, but isn't it always?), and then I want to make one stop on the way home.  Other than that, my day will be paying bills and watching either some podcasts or if I can find one, another cheesy Christmas movie.  If the weather is as pleasant as they are predicting, Hamlet and I will probably take a nice, longer-than-usual walk as well.  Then when The Tim gets home from work, we'll have dinner and a quiet evening, probably watching some of the shows we've recorded.  A nice way to end the holiday weekend, if you ask me.

I hope all of you have a good rest of the weekend as well.  Enjoy your leftovers, if you have any!
Posted by Bridget at 12:37 PM
Labels: broken-bones, holiday-foods, holidays, occupational-therapy, plants, Thanksgiving, yarny-Advent-calendar

Glad you had a nice thanksgiving, your green things are growing, and that you have a wonderfuly yarny treat to look forward to every day!
Keep up with your exercises, and mend-well!

I am glad you had such a lovely Thanksgiving! And, I LOVE the yarny Advent idea! What fun!! I hope you share some of the surprises with us!

And, I think all PT people want to be George Patton... oy. I have un-fond memories of my PT General! But, doing the things at home made a huge difference for me. It was a long slow journey but it ended well! I hope your's does as well!

Glad you had a good Thanksgiving.

We managed to avoid having T'Day with the 14 rednecks and 1 pagan we call family. So we shall call it a win.

Having a treat to look forward to every day of advent will be fun - enjoy. I spent Thanksgiving at my great niece's home, so no leftovers here. I have a small turkey breast in the freezer and may pop it into the oven tomorrow. Nasty weather is predicted so an oven dinner sounds appealing.

Those advent envelopes are such a brilliant idea. What fun!!

Ah, I love those cheesy Christmas movies! I also love the Advent envelopes & am kicking myself for not signing up this year. Glad your PT is going well. As they say - no pain, no gain. And it's all in the attitude.

Im glad you were well taken care of. I need to find those cheesy Christmas movies. We have no leftovers as we went to Minnesota. Now we are expecting heavy snow. tis the season I guess!

happy Thanksgiving and may you heal quickly!! I know you are doing your best, you are a knitter :)

You have been very busy my friend. As far as the OT, well you should see me with some of my patients, yikes I can be tough! But they are kids with many, many issues including ADD, ADHD and behavior issues, I am tired at the end of the day from being a General to everyone!

You so deserve a yarny Advent calendar! That is such a good idea that I think I might save up and get one next year. I hope you'll share some of the surprises!

I love the idea of a yarny Advent calendar - do share the goodies!! Glad your Thanksgiving was nice. hard to believe it was so freezing on Thursday and then so warm yesterday. Best wishes for continued progress with the PT/OT.