Wishing All of You a Gentle Weekend

I am excited because after work today, I have a three-day weekend, and few things in life are better than that, at least at this moment.  As far as I know, the only thing I *have* to do is show up tomorrow for my haircut appt, so I have no plans and a million plans, if you know what I mean.

And I'm on board with that.  Lately, I'm feeling tired of the world.  Mostly because I find it tiring these days when everyone is worked up about everything.  When nothing and no one is good enough, active enough, smart enough, sincere enough, feminist enough, and on and on.

I am of the firm belief that most people try their best most of the time.  That may be naive, but I truly do believe it.  It's hard enough to get up every day and face the universe.  Even people who seem to lead charmed lives still have something that is a struggle for them - maybe it's internal, or maybe they are just good at keeping it in the undertow.

In addition, everyone chooses their own battles to fight more intensely than others.  This is what seems to me to be what has been lost.  And you're damned if you do and damned if you don't.  For example, I have a close friend who works non-stop to prevent hunger.  She has decided that for her, that is the focus of her existence.  I admire her commitment, and I know that she sacrifices time with her family to help others.  And as far as I know, they understand and are OK with it.  Recently, she was asked by someone in her kids' school PTA group to run for office in the PTA, and she explained that she felt that would be overextending herself.  Now she is getting all kinds of blowback from other parents and some of the school faculty, asking why she cares more for strangers than her own children and their friends and their well-being.  Someone told her she "doesn't care enough" about kids at one of the PTA meetings.  She got up and explained her reasoning, and that she *does* care, but felt that her current efforts with the organization where she volunteers would suffer if she cut back on her time, and that would have a direct effect on those they try to help.  Apparently, she was then criticized and mocked for thinking she was "so incredibly important."

And that is just one example of the kind of thing that is making me tired.  What business of anyone else is it if we decide that we prefer A to B?  Unless A is serial killing, and B is fighting for women's rights?  How is it up to others to decide how much we do, how much we care, if we are "enough"?  And if they don't like our explanation, why does that deserve to be criticized and mocked as well?

I feel very strongly about certain things.  That doesn't mean I ignore everything else.  I will do whatever I can to stand up for what I think is right or wrong, I will defend others until the cows come home if I feel they are worth it (and I will defend the cows if they decide not to come home, if someone is mistreating them!).  Like everyone else, I have a certain amount of energy, certain things I have to do, and a certain number of hours in a day.  Unlike most people that I know, I have a very low tolerance level for double standards and crap.

So this weekend, other than getting my hair cut, I'm gonna be gentle with myself.  Because I'm tired, and I haven't done anything wrong.  My way is not your way, but that doesn't mean I'm wrong, or that I don't care.  And I hope that you will treat yourself gently as well.  Know that not only can we not be everything to everyone, but that it's fine.  Most people try their best most of the time.  If you are like most people, give yourself a break.  Smile and enjoy what you are lucky enough to have, for those around you that you care about.  Don't worry if you are "enough" of anything.  Just be.  Do.  Think.  Laugh.  Help.  Look.  Be gentle. 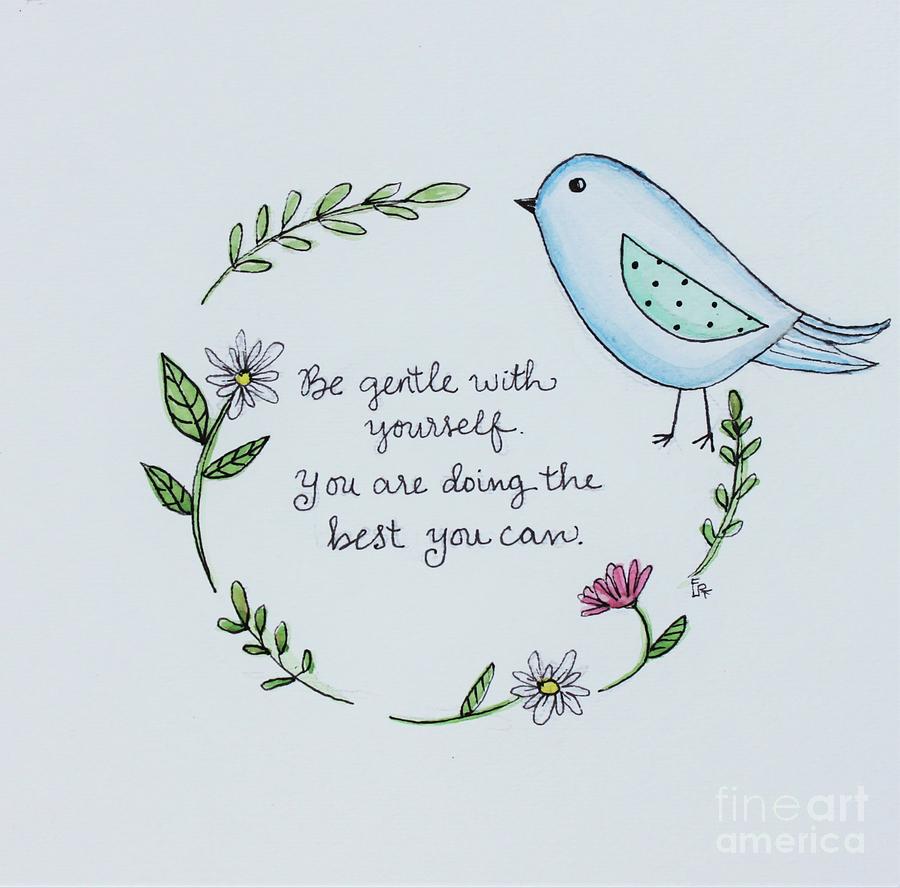 Have a gentle weekend, my friends.
Posted by Bridget at 8:38 AM
Labels: kindness, weekends

I hear you - I have made decisions to not do something and I could not believe the horrid things people said to me regarding the decision.

I think you are probably right, Bridget. And there is No Way we can know what Inner Turmoils people are carrying as they move throughout their days, doing The Best That They Can.

You've said this so well. My grandmother used to tell me that "No, thank you" is a complete sentence and it's a good practice to use it whenever necessary. I'm kind of astounded that your friend has had to defend her decisions and get criticized at every turn, but I was only in the PTA for a year because I quickly tired of that kind of nonsense. I'm leaving soon to drive to MD and while I usually have NPR on while driving, I'm turning it off today because I just can't take getting worked up over an "emergency", congressional fight, and billions of dollars. Enjoy your gentle long weekend.

As for your poor friend...there's so many things wrong with that situation, but the one that really gets me... if all these people criticizing her feel so passionately about the PTA... why don't THEY run?
Because so many people expect others to "fix" things for them.

I had a similar situation here a few months back. We have rent control, but the landlords can raise it more than the standard amount through a special process. The tenants have a right to speak at that process. I took the lead and tried to rally the some 200 residents in our complex, I got a half-hearted response, and in the end we lost (not entirely because of the tenant response, but because the process is skewed in , favour of the landlord.). It took hours and hours of my time, I didn't sleep for two full weeks before the hearing because of the stress. So when it was over, I decided I was done. I wanted to turn my focus to my work (which pays the bills) and things that bring me joy not stress. Some of the residents wanted to fight on (including some who hadn't bothered to be part of first fight). They were extremely upset when I said, while I would give them what information I could, I wouldn't take the lead. I told them to go ahead and meet without me, decide how they wanted to tackle the issue, and let me know if they needed any of the information I had gathered from the first round. Unsurprisingly, they never met, and nothing more has been done, other than complaining to other neighbours about the whole thing.

I hope your friend doesn't take the criticism to heart. None of us are superwoman, and we all have to take the path we feel is best.

Enjoy your salon day and whatever else the weekend brings you! It's a long weekend for me too, so I'm currently in my pjs (it's almost noon), futzing about on the internet, debating whether to sew or knit!

I'm with Bonny... A weekend without the news is my biggest plan for the weekend. (And I am appalled that your friend had to justify ANYTHING to the PTA parents. No. . .means no. She didn't owe them an explanation.) (What is WRONG WITH PEOPLE?)

Enjoy your long weekend -- and your rest.
XO

Oh yes! Good to remember, after all, we are only human. And what a boring, boring place it would be if we all felt/thought/etc. the same. Enjoy the weekend Bridget and enjoy the length of it (Monday is one holiday we do NOT get off:().

Your friend was wise. We have to 'pick' our fights and we are the only ones who should decide what those fights are. And as someone else commented, the complainers could get up and do something, but of course it is easier to let someone else do it and then complain. Been there and done that. :)

That little birdie meme should be an embroidery pattern. I need to cross stitch that and put it on my wall.

That poor woman, shame on those people for saying those things to her. Frankly what she wants to do with her time is up to her, she has only so much time in her day and she does not have to even be in darn PTA! Bless her for what she does for others, my guess is that many of those complaining would not do the job they want her to do, nor do what she does for those in need. I think being gentle with myself is definitely needed. I started my day with a migraine, thank goodness my son was home to drive Little B to school. I need to rest.

I hope your gentle weekend is just perfect in every way. AND, it never hurts to start with a haircut.

I think the internet has encouraged this kind of behavior. Everyone has an opinion about everything. I miss the days when people said socially nice things and uplifted each other!!