Happy February!  I know that a lot of people do not like this month, but I happen to really enjoy it.  There's Groundhog Day and James Joyce's birthday on the 2nd, and St. Blaise Day on the 3rd.  Of course, for football (or I guess commercial fans), also the Super Bowl.  Then there's Valentine's Day, which is also Pip's birthday, and this year, Leap Day on the 29th.  Seriously, what's not to like?

We also have a some other family birthdays and an anniversary, and a long weekend for Presidents' Day.  It all works for me, I have to say.  :-)

I didn't have anything specific planned for this past weekend, which meant that anything I did or did not want to do was reliant only on my feeling about it.  I have to admit that I was lazy a lot of the time, but I did start another pair of socks.  I got a cuff knit on Friday night, and then would just sit down and work on them when I had some time over Saturday and Sunday.  So imagine my surprise when I realized yesterday, that in just two days, I'd knit the legs of both socks! 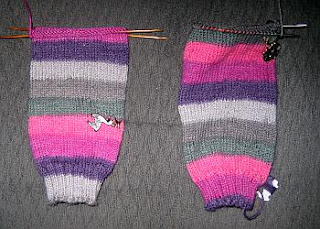 I think some of it was that I was in the mood to just knit and watch shows or podcasts, and also that self-striping yarn gets me every time - you know, the "just another stripe" syndrome.  This is Knitpicks Felici sock yarn, in the Goth Kitty colorway.  I saw someone online using it a year (2 years?) ago, and was lucky enough to snag some the next time it was available.  Then of course, it apparently had to age before I actually felt inspired to use it ... I'm having fun knitting these, and no, I don't care that they will be fraternal socks.  I'm also trying an experiment with this pair, which I'll report on once they are finished and I've had a chance to try them on.

You may remember I said I would be starting a test knit.  Well, I actually had to order a skein of mohair for that project, and there was a mess up in the shipping, so it will be delivered today.  As a result, I do not currently have anything to show related to that.  Stay tuned if you want to see how that goes.

I've also been giving some thought to what I might want to knit (other than socks of course, which are always part of the mix), sew, or stitch.  I need to get that more organized so I can actually get going on some of those projects.

I only saw the first half of the Super Bowl last night, but I was very happy that Kansas City won.  I was not overly invested in it, but I wanted Andy Reid who coaches Kansas City and who used to be the coach of the Eagles, to get a win.  He always seemed like a good guy.  And I have to say, it was nice for there to be a Super Bowl without the Patriots for a change.  (Sorry, Patriots fans.)

I didn't see very many of the commercials, but I have to tell you that the campaign commercial for The Man Who Currently Lives in the White House infuriated me.  It was bragging about how he was instrumental in getting an woman who was in prison unjustly released.  Which, OK, fine, and good for her and her family.  BUT - when the tag line was something like, "Donald Trump reunites families," I nearly went through the TV.  Tell that to people in cages and children separated from their parents at the border.  REALLY.  Grrrrrrrrrrrrrr.

As far as I know, nothing out of the ordinary is going on with us this week.  The guy on the weather report this a.m. predicted rain or the never-popular "wintry mix" for most of the week, which is annoying enough, but even worse when you would like just one decent snowfall for the winter, and all you get is rain or that slop.  Today is actually cool and sunny, so I'd better enjoy it I guess.  ;-)

Have a good week, no matter what the weather decides to do!
Posted by Bridget at 8:09 AM
Labels: February, socks, weekends, wips

I like February very much! And my Rachel's birthday is this week! Why even Sherman got in on the Ground Pug's Day hype! (he did not see his shadow either! lol)

Have a good week (and YAY February!)

I didn't watch the game but I did watch the Halftime show. Yowza....Shakira and J Lo certainly brought their A game. It was incredible.

The weather here steadfastly refuses to acknowledge that it's February. Low 70s?? Are you kidding me?

I like February, mostly because it is short and gets us to spring faster!

I like February so I'm happy it's here. I love your socks and the color theme immensely.

I like February for so many reasons. My granddaughter and I both have birthdays so there are those celebrations. There is more daylight and, if we get bad weather, it does not seem to last as long. No snow yet this winter and it's 70 degrees today. Just wonderful. Love your new socks.