Even more than usual, TGIF - I don't know about you, but for me this week (at work, at least) has been eternal. I'm not sure why, but I'm really hoping it was just a fluke-y kind of thing, and not going to be the norm ...

Anyway, I finally had a chance to take pictures of various things that I have, and have not, told you about recently. And I think a Friday evening is a good time for show-and-tell, so here goes.

A couple of weeks ago, an envelope arrived for me in the mail, with Kim's return address on it. Now, Kim is not only one of my very favorite new friends, but she has a habit of sending surprises in the mail. If you have read my blog for even a week, you know that I do love packages in the mail, and when it's a surprise, even better! I opened the envelope, and these were inside: 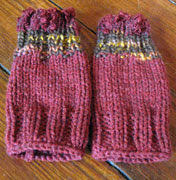 Are they not one of the coolest pairs of wristwarmers you have ever seen? You can't tell in the picture, but towards the top, right above the fair isle band, the yarn has little butterflies in it, which I have never seen before. Kim had written a post about these, and had a photo on her blog, but for whatever reason, I couldn't get it to show up on my computer. So she decided that I might like to see them in person! I would have been thrilled with them anyway, but I do have to say that the fact that they arrived while I was still in the throes of The Great Bronchitis Event of 2007, and a week or so after Abigail died, really made me feel better.

These next two photos are of yarn that I won in a couple of blog contests. Yes, after being totally amazed that I won a prize in the contest Lorette had on her blog, I had a streak of luck, and just a few weeks later, won yarn in a contest for Carol's blogiversary. I was, and am, thrilled, though I have since apparently returned to my usual type of luck with contests ...

Here (on the right), we have the prize from Lorette. The skein on the top is Mountain Colors Bearfoot yarn, in the Bitterroot Rainbow colorway. I haven't tried Bearfoot yet, so I was really excited to receive it. The yarn on the bottom is Heritage Hand Dyed, in the colorway Blueberry Hill.

Below (on the left), are the two skeins of Artyarns Silk Rhapsody I received from Carol. I would never think to put these colors together, but they are stunning in person. Carol also sent me a tiny sock blocker keychain with a pattern for a sock to fit onto it, and a few other goodies in the package.

If I never win another thing in my life, I feel like I hit the jackpot with these prizes. I haven't quite decided yet what I'll knit with them, but that's part of the fun ...

Thank you so much, Lorette and Carol!
Posted by Bridget at 7:19 PM

Kim is a treasure!

I'm so happy you won! Please forgive the absence, I'm just in a strange place right now & better company away if that makes sense. Hope you enjoy all your yarn! They're so nice!