Alas, vacation is over, and as of today, we are back to the usual work routines. We had a wonderful week away - actually it felt like a longer time than just a week, which is always a good sign. We took many pictures, and I will insert a few here or there, but promise not to make you look at every single one ...

But look kids - here are some right now!

These are from the Jamestown Settlement.

The first thing you see when you leave the Visitors' Center, is a wooded area with reed/thatch roof huts, illustrating how the Native Americans would have lived at the time the first settlers arrived.

Then you leave the village, and follow the path a bit more, when you see this: 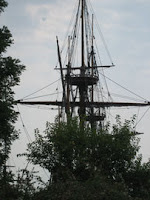 Once you are closer, and walk onto the pier, they have three replicas of the ships that you can tour. 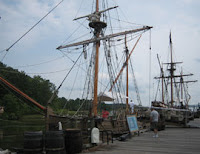 Ships in a row 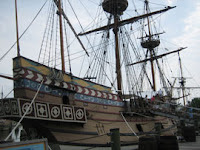 The largest replica, The Susan Constant

Anchor of The Susan Constant 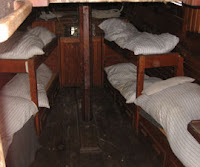 Sleeping quarters below deck for the crew

After touring the ships, you visit a replica of the fort, with representative buildings, and areas where interpreters demonstrate some of the regular tasks of the settlers, or answer questions about their daily lives. 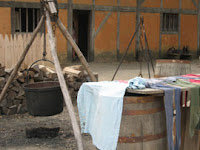 Laundry area
Do you hear that sucking sound??

That would be Ravelry, which, as others have said, is one of the newest/biggest time-sucking black holes of the knitting universe! I had read a lot of people who were invited to be beta testers say how great it was, and would be, once it was available to everyone. I thought it sounded intriguing, but wasn't going to request an invitation. Except that Carol told me I had to, and because I both love and fear her, I decided to put my name on the list.

Well, my invitation arrived a few weeks ago, and I fiddled around a bit here and there. Then for whatever reason, I decided to work on entering my finished projects for 2007 into my Ravelry notebook over the weekend. And everyone is right, it does suck you right in, even if just a little bit at a time. I'm still not sure how much I'll use it, except for getting my project lists organized, but even that is a worthwhile part of it for me ... because as all of you know, I do love to organize things ... and to have something that actually encourages such behavior with a relatively minimum effort - well, throw in a slice of cake and something shiny, and I'll live there! (For any of you who are already members, you can find me as "thekittyknitter.")

Wonderful pictures of your vacation - so glad to know you had a great time. And yes the black hole of time is just that.

Welcome home! We missed you.

Now I order you to deposit one MIL-lion dollars (Dr. Evil voice) into my bank account.

Are those direct-descendant Jamestown chickens, or merely modern-day replicas thereof?

Oh, great pictures! I would love to visit Jamestown. Maybe next year.

Ravelry is pretty cool, isn't it? I was afraid it was going to replace blogging but I don't think it will. Not for awhile anyway.

Great pictures. So facinating to see what the vessels were like that carried the settlers here. Talk about courage. Hey, I bet there were knitters/weavers on board - they would have needed them for clothes!

Oh wow, I would so love to visit Jamestown. So cool, I love historical sites like that.

Welcome back! OK, off to find you on Ravelry...

Great photos! That's a region that I'd love to visit.
I'm finding Ravelry is a great place to easily see what others have done with a specific pattern or yarn. It's a great resource.