D is for Dotty

OK, so I am a day late with my D entry for the 2008 ABC Along - but I did get the picture posted to the Flickr group last night, so I've decided that's OK ...

Here is my progress so far on Dotty, the vest I am knitting for the Kaffe Fassett class at Rosie's:

The main yarn is actually more beige-based (the colorway is called Rose Quartz), and actually since this photo was taken I have finished another row of dots, in a teal blue shade. The pattern isn't hard per se, but there are many stitches (252!), and since it's my first time doing an actual garment using fair isle techniques, it's taking some getting used to on my part. I think once I have another couple of rows of dots finished, I'll have the rhythm of the thing. I'm not sure how much else I'll do before our class this coming Thursday, since right now I'm not convinced that I am doing the right size (but oh I hope I am, since do you know how many times I had to cast on those 252 stitches??). If you are dying to know that details of yarns I chose, etc., the info is here on Ravelry.

D could also stand for "Done," as in two projects that fall into that category! First up, I finally finished the sampler fairisle tam from the class I took with Beth Brown-Reinsel last month: 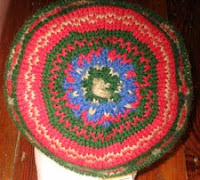 Here's the view from the top, where you can see the four different colors used, and my successful finishing of the "wheel" design which is apparently the mark of a tam.

In the photo to the right, Wishbone has graciously posed modeling the tam, so that you can see the front. (Please note the corrugated ribbing, which I just think is about the coolest thing ever to learn to do.)

This was a fun project, and a good start for fairisle knitting, at least for me. I also realized that it may be the right size for a baby, so in the end, it may someday become a baby gift ...

Here are the details:

The other project that I managed to finish is a Christmas gift for 2008! Unfortunately, I can't post a picture of it, because the recipient is a reader of the blog, and I don't want to ruin the surprise. If you are a Ravelry person, the link for the project is here; if you are not, I promise to do an end-of-the-year extravaganza of projects I made that couldn't be shown at the time (gives you something to look forward to, huh?). 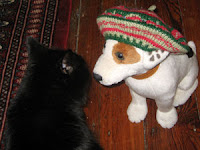 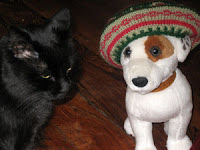 "This has become tiresome. This dog literally has no conversational skills."
Posted by Bridget at 11:44 AM

I'm dazzeled by Dotty! Dang good work. I'm going to carefully watch how you like this project - it's very nice and if the sizing is small enough might consider making it for myself! Very cute tam too - nice and Christmasy for some lucky toddler next year!

Poor Garden Kitty. Some models just can't carry on a conversation, although they do look dashing in FI hats.

Wow, dots! That's an advanced FI/intarsia looking project! What I can see of it looks pretty good!

The tam is spectacular --- kudos!

And, second photo reminds me of something I heard long ago: "If you can't be a cat, why bother?"

I think it's a great way to learn, doing a sample project.

You're lucky to have attended a BBR workshop.

Congratulations! The tam and Dotty are spectacular. That takes some skill. Very nice.

Are you a thrower or a picker when you knit?

Aw, what a great first stranded project! And Dotty is going to be a pretty good 2nd one as well. 252 stitches, huh?! Heh heh, welcome to the world of stranded knitting!

Wow! Your color work is terrific.

Absolutely beautiful! loving the dots, and the tam! :)

Wanted to say thank you for stopping by the blog and joining in the contest! :) You're welcome to head back over anytime since it seems like there's always something new going on! :) Blessings!
Kristin

Nicely done and to think you have a Christmas gift and a special baby gift in early March just makes me plain jealous. Maybe I should be inspired instead, huh? Like I said, nicely done and great color choice too.