It just occurred to me over last weekend, that I had meant to share some pictures, and I'd forgotten altogether. So here they are, better late than never! 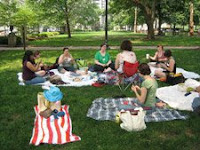 I wish I could tell you in detail who all of the people are in the pictures, but I met most of them for the first time, and sadly their names are lost in the same recesses of my brain that stores the solution to Fermat's Theorem.
I can tell you that in the first picture, the woman in the green shirt in the front is my friend Amanda. We headed up to Rittenhouse Square together early in the day, having seen that the Third Street Ravelers were planning to meet there. I was surprised how many people there were, given that it was 11:00, which for a lot of people on a Saturday is equivalent to the middle of the night ... when we walked by later in the day, there was a larger group.
These knitters were all very friendly, cheerful, and fun, so even though I don't remember their names, I know it was a great time!
(BTW, my friend Amanda is moving to Atlanta later this summer. Which is sad for me, 'cause we have a good time together. So any of you who live in/near Atlanta, you'd better be nice to her if you meet her, or I will hunt you down like a wanted criminal. Just so you know.)
The next set of pictures are from our weekend in Baltimore, May 31/June 1. Of course, there were tons of pictures taken, but these of Zach were my favorites ...
Because my family is nothing if not inappropriate (but oh do we enjoy it!), my niece Amanda thought that Zach might like to have a drink with the rest of us when we arrived. So she poured him a "grown-up" glass of cider.

Now don't get your knickers in a twist, it really was just sparkling cider, and

he really enjoyed drinking with us. (Which is a good thing, 'cause otherwise it's going to be a long and lonely life ...)


I may be prejudiced, but Zach is such a cutie! He is also one of the most well-behaved kids I've been around - I didn't hear him whine or cry the whole weekend, and for a 3-year-old, that seems pretty amazing, at least in my opinion. He is pretty happy just to go with the flow, and enjoys hanging out with anyone who is around.

On Sunday, we all headed to the Inner Harbor and went on a tour of the tall ships. Zach was so happy to carry his ticket with him. It was marked "Stowaway" which cracked me up.
Here he is getting a real charge out of ringing one of the ships' bells:

That's his Aunt Amanda holding him (they are great buddies), his mom La Liz in the background, and me on the right. (I have no idea who the geezer in the far background is.)

After touring a ship and a submarine, it was time for some lemonade. 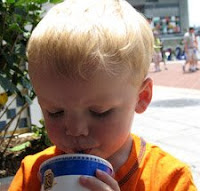 And it really is lemonade. 'Cause I know what you were thinking ...
Posted by Bridget at 7:10 PM

It looks like a picnic for knitters! I hope there was food involved ;)

looks like a great time had by all at both events...and i'm not prejudice, cuz i think zach is pretty cute too..;)

Hey, did Christopher show up and ruin everything by shelling out all the the money for the bridge? ;)

Thanks for the supportive threats Bridget! It's always good to know there's someone out there to bust some heads for me.

Okay, the drinking pictures. . . Cute. But benders almost always start out that way.

And tell Amanda I'm about an hour (depending on traffic) away from her.

Love the pics of Zach.

I'll bet the geezer in the background was just wandering around wanting to meet that sweet young thing in bright green.

WWKIP Day looks like it was fun! Zach is a cutie, indeed. :)