Well, as of approximately 8:00 p.m. last night, we are back in Philadelphia, doing laundry, going through stacks of mail, and putting things away. Fortunately, the weather is truly lovely, with pleasant sunny days, very little humidity, and cool nights. Because the end of vacation is depressing enough, without coming home to crummy weather *and* going back to work!

I will of course ramble on and on about our trip and my niece's wedding for quite a while I'm sure, with many pictures to show (but I promise not all six bazillion of them!), but for today, here's one of some of the flower girls, and the ringbearer: 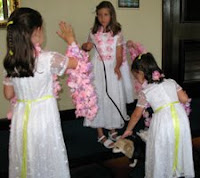 These girls are all nieces of Keith (Julie's new husband), and the two with their backs to the camera are Eve (on the left) and Maddie (on the right), who are sisters, along with their cousin Sara, who was the oldest of Keith's nieces and nephews, and was responsible for making sure that the ringbearer walked down the aisle appropriately.

You may be thinking, "I don't see anyone who is a ringbearer, I just see a small dog." Well, that is Biggie, Jules and Keith's chihuahua, complete with tux, who served as ringbearer! So you see, it really was a family affair for everyone ...

But on to some catching up, and as the title of the post says, 'fessing up. The catching up is my next two letters in the ABC-Along 2008, which have to do with where we were, and what we saw.

So without further ado, I will say that O is for Ocean!

In this case, the Atlantic Ocean. Now, we go to the Jersey shore quite often in the summer, and so we are used to the Atlantic. But the Atlantic in this picture is quite different from our version in the northeast. This water takes absolutely no time to get used to, as it is nearly as warm as bath water. (Whereas, at the Jersey shore, a touch of the water can often send shivers down your spine!) You probably thought you were seeing an ocean in some of the pictures from last week, but those were pictures of the Caribbean Sea ...

Which leads me to the letter P. Originally, I was going to say that P was for Pennsylvania, Pittsburgh, and Philadelphia, and I had pictures representing the three Ps. But I decided that something else was more appropriate ...

I had such fun reading all of your comments and guesses as to where we were, but I will tell you now that P is for Puerto Rico! 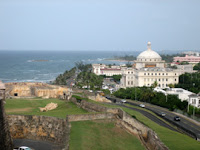 This is a shot looking east from the tower of the Castle/Fort of San Cristobal in Old San Juan. Towards the end of last winter, The Tim and I realized that this coming October would be our 30th wedding anniversary (I'll pause while you all say, "ahhhh" ...), and that we should take what we call "a big trip" - meaning, going somewhere completely out of our normal experience, and not staying with friends or relatives. For our 25th anniversary, we had gone to Ireland, so we thought we might do something tropical this time around. We were looking into going to Costa Rica when Jules and Keith decided that they would get married in Puerto Rico. So we added time on to the weekend of the wedding, and decided that would be our big trip.

It was absolutely wonderful, magnificent, beautiful, fun, nice - well, I could go on but I'll stop. Everything worked out the way it was supposed to be, and it was a good combination of relaxing, sightseeing, exploring, and having a good time with family.

You all had some good guesses, but dmaxi figured it out right away! (The Tim was quite impressed.) As it turns out, she is a blogging friend who lives in Ireland, which seems like the perfect combination - a person who lives where we last visited, guessing where we just were! And, since last week was the 2nd anniversary of this blog, I have decided that she gets a prize. Now I know that for those of you who knew all along where I was going, that is not really fair, but I trust that you will somehow survive ...

So tomorrow, it's back to work which just, well, sucks. The only bright spot is that The New Evil Boss is at a conference this week, so I won't have to deal with her (at least not in person - I'm sure she has sent me plenty of "helpful" e-mails to give me advice/instructions while she is gone).

However, it will already be a Wednesday before a long weekend ... thank God for small mercies!

Puerto Rico! Fabulous. I've heard that is a spectacular place to visit (from my 8th grade Spanish teacher) and others since.

BTW, I think I've found a ND scarf kit I'm going to order. It's the Peasant Lace Scarf and I found the link through the ND Group on Ravelry. It will be a quick knit on US 9 needles. Just thought you might be interested.....

Puerto Rico! I've been dreaming of visiting there ever since I read "The Rum Diaries" a few years back. Hated the book, but loved the setting.

Welcome Home...So glad I didn't give the suprise of locale away!

Looks like the kids and Biggie at least had a great time.

See you tomorrow. Much to fill in!

I'm tingling with pride and blushing with embarrasement at the same time. We'll have to go to Peurto Rico for our Wedding Anniversary sometime soon (remember, we share the same day!) but I don't think I can wait until our 25th or 30th. It looks beautiful, though I don't know how I'd cope with swimming in a warm Atlantic - culture shock!
::waving to you over the Atlantic::
D

Sounds like a lovely time was had by all. Hope the reentry to the working world isn't too painful!

Welcome back! What an incredible trip -- I'm particularly jealous of the rainforest excursion. I think PR might now go on our short list of places to visit!

Bridget- Sounds like an awesome vacation- and aren't the little girls excited to be dressed up and in the wedding party. Not to mention the dog.

My daughter was on a shopping trip last week in Mercer PA- came home with a ton of booty.

Puerto Rico! Sounds fabulous and what a way to mind your P's and Q's!

I love the flowergirls, ringbearer shot. Family should be in the wedding.