OK, so maybe that subject line is a bit over-the-top for what you will read and see here, but it is what passes for true excitement at Chez Ravell'd Sleave.

That would be me, and I did indeed win a very cool prize recently:

This little glass fishy! Shan was holding a contest, and happily, I was the winner! I am especially taken with him, since he is mainly green and blue, and those are two of my favorite colors. Also, my zodiac sign is Pisces, so I think it was kismet.

Amazingly, Shan made this little guy - that to me is more than amazing. 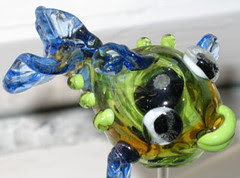 I don't know about you, but he makes me very happy with his cheerful colors and fishy self. Thank you so much, Shan!

Once again, that would be me, and the finished project is the Silk Kerchief. I finished it yesterday, and wove in the ends. I'm hoping a nice soak will make it softer, and that blocking it will even things out, shape-wise.

I am more than pleased with how it turned out, though my feelings have not changed one iota about the Noro Silk Garden Sock yarn - as a matter of fact, if anyone wants the leftovers, let me know, I would be happy to send them so that I do not ever come across them again in my stash. I would guess I have approximately 1/2 of each skein left.

Local Man to Appear on TV!

That would be The Tim, who will be appearing tomorrow on the show called "Speak Up Philly" on Channel 57 (one of the local CW stations), at 8:00 a.m. He and a representative from the Free Library of Philadelphia will be talking about an upcoming event at the library.

Remember the Zach Attack Hat I knit for my great-nephew Zach for his 3rd birthday? (Blogged here and modeled here.) I received a couple of e-mails asking me if I was going to write up a pattern for it. At first I thought I wouldn't, since it was not really something that seemed all that original. But after giving it some thought, and recalling how frustrating it was trying to find a pattern that matched what I had in my head, I decided it might not be such a bad idea to write up the pattern. I spent a lot of time checking through various knitting reference books to get the basic idea and sizing, and though many of you design complicated things on a regular basis, this was a real leap of faith for me.

Before I present it as a free pattern, I would like a couple of other people to try knitting it to see if my directions make sense. There is the solid version, which I knit for Zach, and a striped version that I wrote up, but have not knit. If you are a beginning knitter, or someone who might be interested for whatever reason to try either one, please let me know, and I'll send the pattern to you via e-mail. Unfortunately, I can't offer to send yarn and needles as well, due to current financial restraints. (Maybe once The Tim has a paying TV gig ...)

OK, that's not really news, or even all that exciting, but I hope everyone has as relaxing a weekend as Jetsam, who started his holiday weekend yesterday:

I think The Tim's Emmy chance reach much farther than local. . .

I'll help with the hat. If it isn't made on DPNs.

Hooray for all!
But what kind of perverted kitteh pr0n are you posting, missy?

Oh rub that belly for me, would'ja?

i hope the tim uploads this appearance as i am both a day late and a dollar short...

That picture of Jetsam needs a caption, a la icanhascheezburger. Such a cutie!

Love the pic of Jetsam! I could test-knit for you, if you like, as I'm sure one of my kids or nieces or nephews will need a new hat for next winter.

What a cool prize! I love glass art and when I was a child I would watch with fascination the glass blowers at work.

So much going on ~ love your kerchief and that's very cool that you are going to write up a pattern! I don't much knit for kids but if you run short of volunteers let me know and I'll give it a whirl.

Jetsam takes his relaxation seriously. A stretch like that is not the move of an amateur.

Look at the Jet-Man, all comfy and illegal looking. Can you imagine if humans did that? Sheesh! :D

Sure I'll be a tester for the hat pattern. And if I can do it - Anyone can.

Love the Jetsam pic. What a big guy he's become.

My not-silk kerchief is almost done, but poor thang... I've tossed it aside for a travel sock. I guess I should finish it up, eh?

Relaxing is very important, Jetsam would point out.

Cute fishy! Nice kerchief although I'll pass on the yarn. I hear it's annoying.....