Hello everyone my ma is busy with some stuff today so I thought I would write a blog post because I like to try new things and I can't even think about going outside because there is still some of that wet and cold stuff that they call snow and even though I thought it looked like fun it wasn't really and if you want to see for yourself just look at this picture where it is getting ON me!!!

And not only did it get on top of me but then it was on my belly too!!!

This was right before Christmas and Tess said that Santa lives someplace where it is snowy all the time and I thought that couldn't be true but then the Garden Kitty said it was the truth and then I thought that Santa must be very tall which is why I bet it doesn't get on his belly and then I remembered that he doesn't stand on all four of his legs like I do so I guess his belly is OK.
I think snow should be soft like it looks so that you could sleep on it and be cozy.  Tess says I think that because I am an eejit, and I don't know what that means but I'm pretty sure it's something that is fun because I love to have fun every day.
Anyway, I have been busy helping my ma with something she calls sewing but I call it playing with paper and scissors on the floor and it is so much fun but she doesn't seem to think it's as much fun as I do but I think she just says that because how is this not fun?

She and my da both said this was ridiculous and then she put things away because she said she wouldn't be able to get anything done but I don't see why because I was ready to help some more but she didn't care and put things away.
The Garden Kitty says that I need to use punctuation here because my sentences are too long and they ramble and I don't know what punctuation is and I don't care because if he thinks that then he can use punctuation or whatever he wants to when he writes a blog post because I am writing this one and I think it is  just fine the way it is because it all makes sense to me anyway except that it is taking me a little longer than I thought because it is harder to do than I thought because I am trying to make it make sense and that is not too easy except when you stop and think and I don't like to stop doing things for any length of time when I am having fun and think that it is important but I think I might be done talking to you because I told you all the things I wanted to plus now I think it's time to rest because when you are a 3 year old kitty who has been up since early and then you have to write a blog post with pictures and everything else you have to do then you get tired really fast and so I am going to rest I hope you like this writing of mine and maybe some day I will write more and see if there are more pictures of me so you can see how busy I am all day and how I like to have fun.
Wow this is tiring but I hope you have fun today I think I will once I take a break 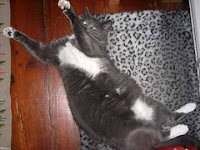 so bye and now I will stop typing love Jetsam.
Posted by Bridget at 9:30 AM

I'm very impressed with your usage of the "shift" key, without thumbs!

I am coming to get your belly!

Rufus has been helping me with Tom's sweater, he thinks it's fun too. I don't think it's as much fun.

Jetsam- You have such wonderful tennis shoes!

I think you should listen to that Garden Kitty about punctuation. That run-on paragraph near killed me. ;)

Love you, too, Jetsam, you wonderful furball. Riley's thought process, not surprisingly for being Jetsam's blog twin, is very similar, though being apartment-bound he doesn't know what snow feels like, though he loves to watch it. Meow!

Hi Jetsam! Wow, I've always wanted to do a blog post for my Mom but she's *always* around. And I haven't figured out how to turn the computer on. You'll have to tell me. You rock! Too bad you're a dude kitty.

Jetsam, a little Faulkner in disguise. Who knew?