... And So This Is Christmas

And where have I been? (to paraphrase John Lennon)

Oh, I've been here.  "Stuff" has been keeping me from posting as frequently as I'd like.  Which is annoying, since usually this time of year is when I have the most to say - for better or for worse!  To catch you up, I present the good, the bad, and the ugly (though not in that order) of the past few weeks.

The Bad:  I had to get a crown on a tooth, and boy did that hurt.
The Ugly:  I have to get the permanent crown this Thursday (yep, December 23)
The Good:  It will all be taken care of before Christmas Day.

The Bad:  Jetsam ate some curling ribbon.
The Ugly:  The veterinarian bill was quite a lot of money!
The Good:  He is fine.

The Bad:  I went for my yearly mammogram, and ended up getting two (count 'em, TWO) cone biopsies that same day!
The Ugly:  The scars and the bruises didn't just hurt, they were mighty ugly.
The Good:  The results came back negative for anything worrisome.

The Bad:  One of my co-workers complained because I had Christmas decorations in my office.
The Ugly:  I got called on the carpet for it by the new boss.
The Good:  I pointed out that my office is waaay in the back, and the complaining co-worker does not *have* to come in.  And said that I was keeping the decorations.

The Bad:  The Three Days of Disgustingness (see above) put me behind on everything.
The Ugly:  It was December, and I was behind!
The Good:  I have finished what needed to be finished, and will do everything else when I have a chance, and not worry about it.

The Bad:  The Tim and I got our signals mixed for meeting at my work Christmas party, so I missed an hour of it.
The Ugly:  We were tres annoyed at one another.
The Good (and The Ironic):  I won a $25 Barnes & Noble gift card in the raffle!

The Bad:  The Tim felt like he was catching a cold, and it's a really busy time of year for him to be sick.
The Ugly:  Said cold left him alone, and decided to visit me instead.
The Good:  My coughing and hacking provides my own Christmas horn section.

The Bad:  I felt so awful at the beginning of the month, I didn't get a chance to do much shopping for The Tim.
The Ugly:  I was afraid that I wouldn't have anything to give him.
The Good:  A combination of online shopping and going out in Center City Philadelphia shopping today has resolved the issue.

The Bad:  Tess and GK are not here to help decorate and wrap presents this year.
The Ugly:  I knew that Tess might not be here, but it never occurred to me that GK would be gone.  Getting out the decorations was hard.
The Good:  Jetsam is here!

The Bad:  Lots of stuff happened that put me off track.
The Ugly:  I was pretty depressed and feeling hopeless.
The Good:  It's Christmas!  I'm here, The Tim is here, Jetsam is here, and we're all fine!

Which means it's all good. 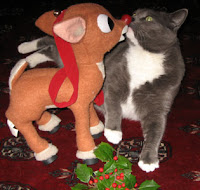 The Good: Your blog is always a delight to read.
The Bad Your blog is not updated on a daily basis (this coming from one who hasn't updated her own blog for almost 3 months..hangs head in shame)
The Ugly: .....just the opposite ....the adorable picture of Jetsam getting cozy with Rudolph

Bridget- Jetsam is so cute-look at those tennis shoes.

(someone complained about your decorations? Give me a break)

Oh no! Your bads were some bad stuff! The poor tooth and a cold on top of it? And Jestsam! I'm so glad he's okay but why can't they be okay without using up half the emergency funds? Oh well. Oh, and called on the carpet for decorating? Jeez Louise.

Too cool on the B&N certificate!

That is an adorable pic.

What a great post! I'm looking forward to another year of The Ravell'd Sleave in 2011. I love how you tame the ugly. And what a great photo! My kitty wonders why her mom doesn't capture HER cute moments.

That last photo is awesome. I hope once the crown is in place, you have a peaceful, happy Christmas!

Every cat we've ever had liked to chew on curling ribbon. I've pulled some crazy lengths out of their mouths.

Tough Christmas for a lot of people. You are one of those who should never have to endure that.

Sending hugs for what has been a challenging end to the year.

2011 is right around the corner and I hope it brings a clean slate and better prospects.

And I sympathize about Jetsam. Corey decided the elasticized cotton/bamboo I was knitting my mom's Christmas socks with looked appetizing and helped himself to a foot of the working yarn. Luckily he passed it without intervention, but the Burrow floor was nasty when we got home the next day. Sometimes they just get in their own way, don't they?!

Oh gosh Bridget. What a lot of Bad and Ugly. I'm so glad you are here and The Tim is here and cutie pie Jetsam is here. I sincerely hope there's a lot more Good coming your way in 2011.

Gosh Bridget, it's bad you've had such a low December. I sure think it's good you are here and the The Tim is here and Jetsam is here.

"...a very merry Christmas and a Happy New Year. Let's hope it's a good one, without any fear..."

for all of the bad: i break heads. just saying.

i miss my asshole cat Chico loads, even though i was thinking just this morning that two years ago, he peed on all of the gifts under our tree... that was a mess.

Oh good grief, that's a lot of ugly and bad. It sounds like everything is turning to good, though. I'm glad that both you and Jetsam are fine...

Oh, wow, you've had quite a month. I didn't know curling ribbon was such an attraction. I'll be sure to keep mine away from the kitty girls. That is an awesome Jetsam pic! Merry Christmas and here's hoping 2011 is a good one for you and yours.

Oh, Jetsam you are such a player! What a cute picture of him snorgling Rudolph (or maybe it's Clarisse...).

That's a nasty list of Bads! But, you always see the good, and that's what important. Although I'm sure at the time while at the vet and the dentist it probably didn't seem quite that way.

What is it about people and holiday decorations? You have great decorations with a classic flair and all the warmth needed for the season!

Love Jetsam and Rudolph - guess he has to make nice with the newby!

(Catching up on blog reading...)

Jetsam! What a cutie. I miss Riley :( But George and Henry do a good job of distracting me.

Happy New Year! Here's to hoping this year is better all around.

I am so glad that your biopsies were boring. Although I know what you mean -- the week before my mastectomy, they did a biopsy and I told the doctor I knew he wouldn't remove the wrong breast because the one in question looked like it had been in a bar fight. What a horrible year that was.