The Fourth Day of Christmas ...

and I have the last two Seafarer's Scarves to show you, now that they have been finished and gifted.  I am very pleased with how all of them turned out, and especially pleased that I finished them well before Christmas.  (Well, admittedly, I wove in the ends on The Tim's scarf on Christmas Eve, but just because I'd been too lazy up to that point.)

The green colorway went to my niece Julie's husband, Keith.  I had finished knitting the scarf before Thanksgiving, but only realized after I mailed it that I'd failed to take a picture!  Fortunately, Julie was kind enough to send me some pictures.  The Tim chose the one he wanted, and posed for the photos below just this afternoon. 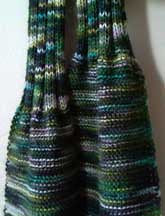 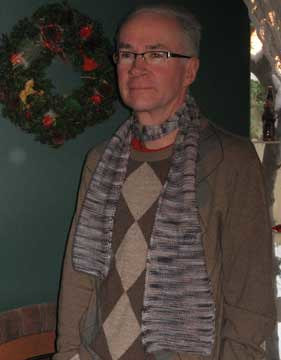 Pattern: Seafarer's Scarf
Yarn: Misti Alpaca Handpaint Suri & Silk. (No colorway, ball band missing, etc. - see previous entries)
Needles: US 5
Comments: Love this pattern, and I think each colorway turned out particularly well. I also got a picture of Keith modeling the greenish scarf, but didn't want to post it here without his permission. (You can see it here on Ravelry, though.)


I really cannot explain this one, but it does show the colorway well. 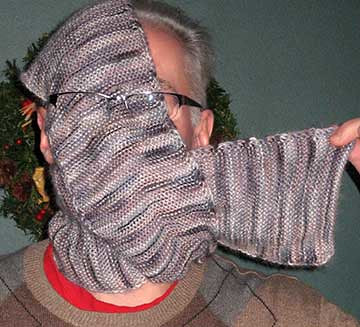 As anyone who has ever knit something for another person knows, there is nothing better than having the recipient like it!  My niece said Keith has worn his scarf every day since opening it, and the same is true for The Tim, who also requested a hat from the same yarn.  (God knows what the modeling shot will be ...)
I know I've said this before, but I really recommend this pattern to anyone who wants to knit a warm, cozy, basic scarf.  I've knitted this in both solid yarns and variegated yarns, and each is lovely in its own way.  There are several variations on the pattern (the garter stitch is replaced with something else), but I just really like this one the best, to be honest.
Now that the Christmas knitting is finished this year, I'm actually spending this week working on something for me - shocking, I know!  I'm making this, using different colors, and so far I love the way it's turning out!  I tried taking a picture of it in WIP form, but couldn't get it right.  I'll try again, but you may just have to wait until it's finished.  Right now, I'm on row #19 of 48 rows, so it could happen sooner than you think ...
Posted by Bridget at 8:20 PM

Bridget- It is usually miraculous when someone actually likes what you've made them. A great feeling.

Wishing you, Tim and Jetsam a great New Year.

Oh, I needed a big chuckle and the Tim provided it. Ha! A well-loved handknit gift is a reward for the knitter too...

Before he got silly, The Tim looking dreamily, yet bravely, out to sea. . .

The Tim appears to be channeling Tim Gunn. Look at the expression! The body language! I honor both Tims with this comparison.

These comments have given me the best laugh I've had all day - thanks, all of you!

Love the scarf- and the photos are wonderful!

Loving the scarf even more seeing it so "professionally" modeled. I will have to make some of these for DH and others. thanks for sharing.

The kids decree Tim is "Mr. Scarf-face" and love it.

I can recommend the "Scarf-face" look. It proved very cozy on a wintry blowy tigerish day.

At least until I walked in front of a Septa bus.

P.S. Thank you, my love, for the beautiful scarf. It's like wearing a friendly alpaca around my neck.

when you make the matching hat for tim, make sure you knit it long enough. don't want him to stretch it out ;)