And not because it's Tax Day here in the U.S.!  Though it does make things that happen on or near this day easier to remember, for better or for worse.

On this day in 1865, Abraham Lincoln died.  I am one of those people who has found him to be a fascinating, if somewhat tragic figure, all of my life.  Over the years, The Tim and I have visited many of the sites that deal with his life and death.  When you go to his home in Springfield, Illinois, you truly get the sense that he might walk in the door at any moment.  At Ford's Theater in Washington, DC, one of the things you can see is the contents of the pockets of the coat he was wearing the night he was assassinated.  Humble things - not what you would expect a President to have in his pocket, especially today.  I find Lincoln to be an inspiration, because I think he was a flawed person who strove to be the best he could be.  (And personally, I don't think he was gay.  Nor do I care anyway.)

Then in 1912, the Titanic sank on her maiden voyage across the Atlantic.  I remember when the latest version of the story came out, James Cameron's "Titanic," that what struck me the most was what was probably a pretty accurate depiction of the last moments of regular, ordinary people - those who for whatever reason could not or would not go onto the deck to see if they could get into lifeboats.  The elderly couple lying next to each other on the bed holding one another close, and the young mother reading calmly to her young children - I find that the poignancy of those scenes has stayed with me all of this time.

Years ago, The Tim and I were in Halifax, Nova Scotia, and visited a cemetery where most of the rescued victims were buried.  The things that stayed with me were that first of all, there were so many graves.  And so many of them were marked with this information only:

Though it sounds odd to say so, visiting the cemetery was a somewhat comforting experience - the people of Halifax cared enough to make sure that these unknown people were laid to rest in a beautiful spot, where they were at least acknowledged and counted.    I always hope that there was some way that their families knew they were safe and cared for. 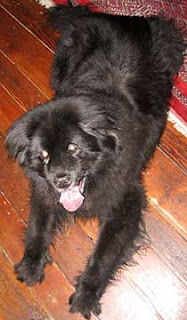 And then last year on this day, my sweet Doughboy died after a brief, unexpected, and very serious illness.  I think of him every day, and miss him so much.  He would have been so thrilled to know Dug, and Dug would want to be his best friend.  (Though I realize that if Doughboy was still here, we wouldn't have Dug.)  I like to think that Doughboy is happy that Dug is with us, since he can't be here every day for us to hug.

I'm sure there are many other things that happened on any given April 15 - and plenty of them were/are happy occasions.  Every day can be someone's best day as well as someone's worst day.  I like to think that it gets balanced out over the universe.

I apologize if reading this has made you feel bad, as that was certainly not my intention!  But I've been thinking about all of these things all day.  Maybe that's a good thing, as it has made me actually stop, think, and feel.  Nothing is forever, and though I don't think it's worth obsessing over, I think being reminded every once in a while is not a bad thing.

Bridget- We can't always celebrate the happy stuff- we have to take the good with the bad.

Halifax is one of my favorite places.

Yours is the second blog I've read of all the tragedies that have occured in April. Interesting month to say the least.

I find cemeteries interesting as well. My dh and I will usually visit an old one when we are in a new town. Savannah had a ton to choose from!

I was stunned and horrified when the 100th anniversary of the Titanic disaster came to hear students saying to each other, "That really happened??? I thought it was just a movie."

I never saw that film, but "A Night to Remember" leaves me sobbing every time.

Introspection is a valuable use of one's time as it thinking of those that have gone before us and done great things and those we have loved and lost.

Possibly also the use of punctuation too but you made me cry.