Not an April Fool

Happy April Fool's Day!  March was such a great month for me (it usually is) that I kinda hated to see it go.  But April means April Fool's Day, Easter, and getting the garden ready for spring.  I'm not much of a gardener, but I love planting flowers and herbs (The Tim plants crops on our deck and roof), and this year I want to fix up the garden.  We used to spend a lot of lovely time there, but then we got lazy, mosquitoes took over, and it got messy.  So I want to make it an outdoor space that we can use again.

But before we move into April, I wanted to tell you about the class I took a week from yesterday. 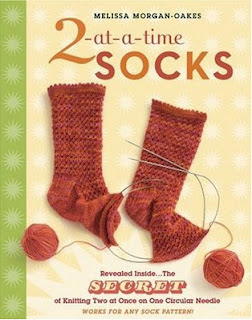 If you have read this blog regularly, you know that I am a sock knitter - big time.  And I have no problem with dpns (double-pointed needles, for the non-knitters out there), actually I like making socks with them.  But of course, people use circular needles now as well (called "Magic Loop"), and I've wondered about that technique.  Having the chance to try knitting two socks at once was something I just wanted to learn about.  So when Melissa Morgan-Oakes was here in town at Loop, I signed myself up for the Learn to Knit Two Socks on Circulars workshop.  (They had one the next day about knitting two socks at the same time from the toe up.  I can barely knit one sock at a time, using the toe-up method.  But I digress.)

I had heard of Melissa Morgan-Oakes, and actually kinda felt like I knew her from Facebook, where she was a friend of Carol's, and a regular commenter.  She sounded pretty funny, and also like an interesting person.  I must admit that this chance to take a class with her seemed like it would be a good experience.

There were about 16 of us in the class, and the day itself was kinda dreary, so it was a good day to be inside, knitting.  Melissa was better than anticipated, both as a teacher of a complicated technique, and as an enjoyable person.

And knitting two socks at a time on a circular needle?  Challenging, to say the least.  But she took us all through each step until everyone got it, and by the end of the class, all of us had a cuff, leg, heel, and beginning of a  foot on two tiny socks! 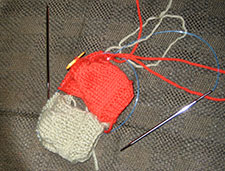 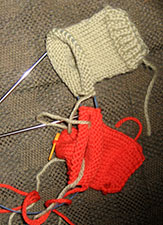 Do I think I'll start knitting socks this way all of the time?  Well, I want to try one regular-sized pair, in the same yarn (rather than two different yarns, so you can tell the difference between each sock on your needle), but like I said earlier in this post, I don't have any problems knitting socks with dpns.  Who knows, maybe it will depend on how I feel when I start any given pair of socks.  I don't know.

I do know that I'm frogging the pair of Graydon socks (see #4 in that post) I have underway, and using the yarn to give a plain pair a try using this method.  That pattern turned out to be a yarn hog, and I wasn't really pleased with the heel construction used.  So they have been languishing for months.  I think they have been waiting to be my first attempt at two socks at once on a circular needle, and who am I to disappoint them?

I will tell you though - if you ever have a chance to take a class with Melissa, do not pass Go, do not collect $200 - get to your LYS or wherever the class is offered, and sign yourself up!  Not only will you learn something in a comfortable setting, but you will enjoy spending time with her.

And as the subject line to this post indicates, that's no April Fools' joke!
Posted by Bridget at 7:25 AM
Labels: 2-at-a-time-on-circs, classes, Loop, MMO, socks

Curious... I think that's the book I gave away because I just couldn't get it. However, "everyone" swears by it. I have since done two socks on one circ, but the heels still baffle me. Maybe I'll buy the book and try again...

I would never be able to figure it out on my own - now I think that I've been shown how to do it, I could use the book for guidance.

I've had that book for over a year, looked through it lots when I first got it, but am scared to try it. I think I finally bought a circular needles long enough but...
I just started a sock (one at a time!)on a really short cirular and love it! I swore by dpns but no fussing with the breaks between the dpns! It seems to go so fast.