Now with More Doodle and Koodle!

Well, it's been a busy week here at Chez Ravell'd Sleave, what with a kitten keeping all of us on our toes!  Fortunately, everyone seems to have decided that it will all work, and there have been no serious conflicts.

Last Sunday, when I took Dug for a walk, I decided to do a little photo essay.  We have a weekend morning routine that he truly enjoys, and it's nice to see him get to have a nice, long walk (our weekday morning walks are short and sweet, to say the least!) which results in seeing some of his doggie pals.  Anyway, some of the pictures are blurry because a) I'm not a great photographer to start with, and b) I was moving when some of the pictures were taken.  But, for those who are interested, here is the link to a Flickr slideshow, called "Dug's Favorite Day."  Note that if you go to the upper-right-hand area, and click "Show Info" you can see the captions, etc.

Dug's day got better, though, that evening, when the koodle arrived.  They have become fast friends, and when the kitten is not sequestered for meals and such, they spend a lot of their time together.  I'm not sure the kitten has any idea that Dug is a dog, and for Dug's part, he seems to sense that it's a baby creature, and he is very gentle.

There's a lot of this kind of activity: 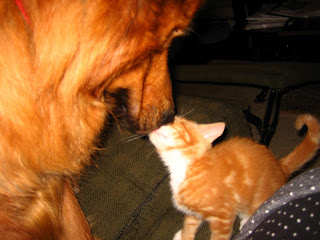 Along with attacks on Dug's legs and tail, which he doesn't seem to mind.

It's also been decided that the koodle's official name is Milo.  For whatever reason, he just seems like a Milo - not that I can tell you what that means.  It's true, there was the movie called "Milo and Otis," where the cat was an orange tabby, but that wasn't the immediate inspiration, so to speak.  And it seemed destined to be his name, when The Tim told Milo's foster mother that we were trying to think of a good name for him, and she said that she had been calling him Milo!  Weird coincidence, huh?

Jetsam and Pip are also just fine with Milo's joining the family.  The Tim and I think that Jetsam is particularly pleased because Pip is now getting a dose of his own medicine - as in, he wants to sit in a sun spot, and out of nowhere, Milo attacks!  Pip still does that to Jetsam and when he is in the mood to play, it's fine ... but otherwise, Pip gets a whack on the head and you can tell he has no idea why it happened.

Congrats on the new addition to the family! Those four legged fellas are lucky to have landed in such a great home. (well.....three legged for Pip) ;-)

Bridget- There was a cartoon with a dog named Mark-Anthony and he got in trouble for bringing his kitten in the house.

That is such a cute picture!