I meant to post yesterday, but zonked out instead.  For whatever reason, by the time yesterday rolled around, I was exhausted - the week had just worn me out, though I am not sure why.  In any event, that's that, and here we are in the month of March.  Which is one of my favorite months.  I read somewhere a quote about March saying it was "winter in the shade, and spring in the sunshine."  I think that sums it up quite nicely.  But March also includes Milo's first birthday, my birthday, St. Patrick's Day, St. Joseph's Day, a couple of other family birthdays, and this year, Easter right at the end.  So it's probably pretty obvious why I like it so much.  :-)

Since St. Patrick's Day falls in March, and I've failed to do it any earlier, I decided that I would share some of our pictures from Ireland on the blog this month.  We took approximately eleventy billion, but don't worry, I won't make you look at them all!

Anyway, we visited Ireland from October 25 until November 2 of last year.  It was our second visit, and most certainly will not be our last.  We flew in and out of Dublin, and our first reservations from there were in Kilkenny.  But we decided rather than go straight there, we would take a brief detour and visit the Irish National Stud in Tully, County Kildare, which is where so many of Ireland's famous horses started out.  According to the map, it was maybe 90 minutes from Dublin, so we figured we'd go there, take our time looking around, and then head to Kilkenny.  Which is what would have happened if the exit we needed from the highway had not been closed for maintenance!  The map we had was not as detailed as would have been helpful (though we learned that was not unusual), and well, we didn't know where we were really, so a 90-minute trip ended up taking us the whole day, and we got there with 45 minutes to go until closing!  However, it was well worth it, and it was a beautiful day. 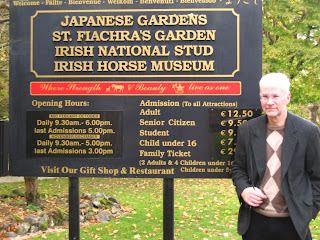 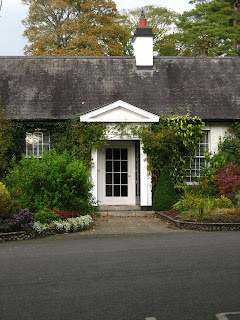 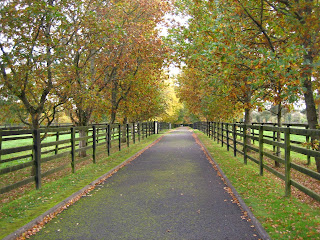 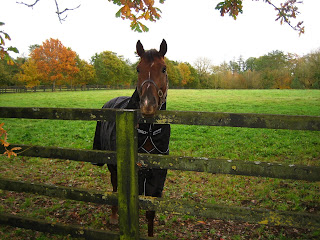 One of the residents 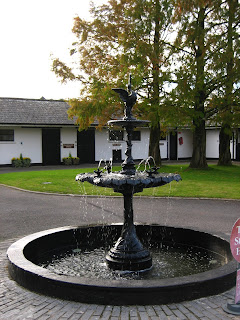 The fountain in the stableyard 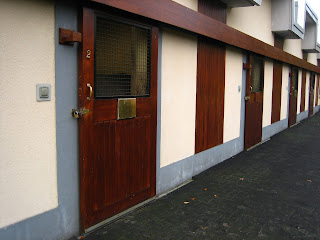 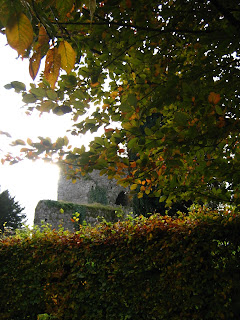 Remains of an medieval church on the grounds 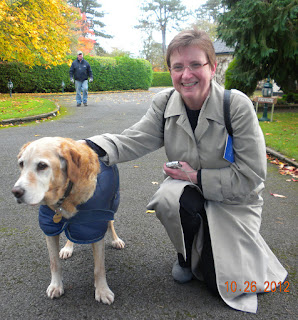 Me with Oscar, the caretaker's dog

As it turned out, we saw quite a bit, and enjoyed every second of it.  We got in the car and headed to Kilkenny, where we would be spending the night.  I'll show you some of those pictures the next time.
Posted by Bridget at 10:50 AM
Labels: Ireland

I really enjoyed these photos. You can almost smell the green grass and the autumn leaves. Doesn't look like the stables had any smell at all. Tim seems a little jet lagged. You, on the other hand, look all perky. Was it the dog? Or is Tim the "we just got out of the car" photo, whereas you're the "we've had 45 minutes of walking around this beautiful place" photo?

Great images. I LOVE them all. You look so HAPPY with the caretakers golden dog!!!