I did forget to show you these pictures from our trip to Ireland before I showed you the pictures from Limerick.  But I know you'll do your best to overlook that and just enjoy them.  If not, your problems are clearly not solvable by anything I can do ...

When we last visited the photos from our trip, you saw some of the highlights from our visit to Limerick, but I forgot to show you the pictures we took during a stop on the way there.

The last time we were in Ireland, we quickly drove through the little town of Adare, County Limerick, on the way to our airport hotel, and it looked very pretty.  So this time, since it was fairly early in the day, we decided to stop and look around.  What a good idea this was!  It was what you envision a small Irish town to look like in your head (well, at least in my head), and there is even a castle that is turned into a luxury hotel with what sounds to be a pretty amazing golf course.  (Not that I play golf, but this is info I gleaned from one of the locals.  So there.) 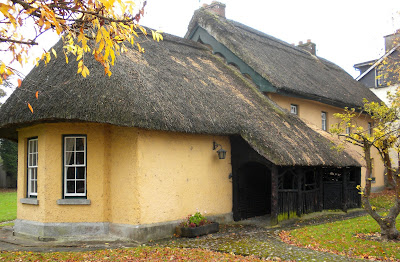 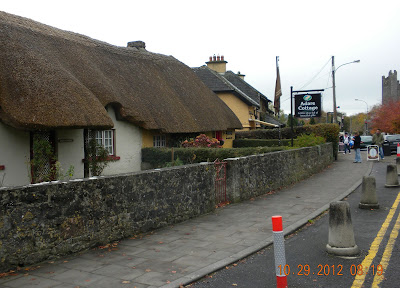 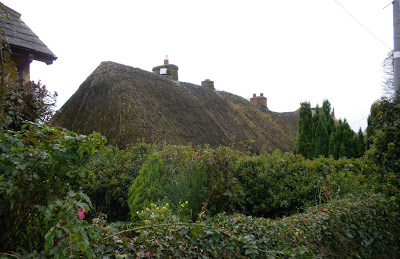 As you can see, Adare has a lot of thatched-roof cottages, some still residential, but those along the main street are tea shops, or small boutiques.  They are so pretty, and seem like pictures from a storybook.  We were both completely enchanted.

We stopped at a tea shop for tea and a scone, and this guy was sure we were going to share: 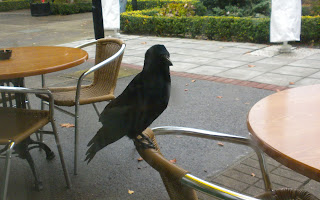 There was only one problem:  we were inside and he was out the window!  And whereas, we were amused, he was dismayed ...

There were also quite a few medieval sites, as there are in all of Ireland. 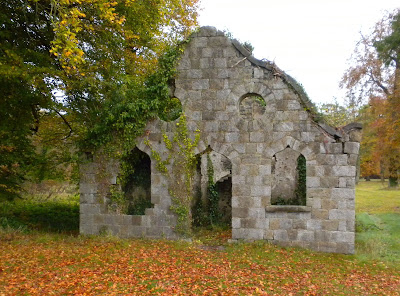 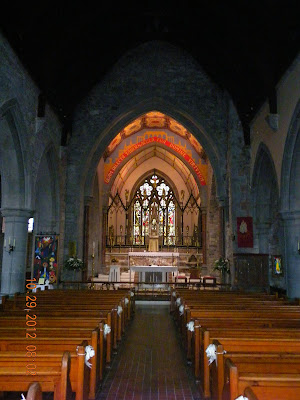 There was also a lovely city park, with a very small fountain in the middle, and walking paths that went from the center like the spokes of a wheel, into more woodsy areas.  We did take pictures there, but since it was slightly overcast and the trees blocked a lot of light, those didn't turn out too well.

We walked up the carriageway of Adare Castle, but it was blocked after a certain point unless you were a guest, so we didn't get a chance to do much exploring on the grounds there.  We did see a small building a the entrance to the carriageway, with a sign that indicated that originally, anyone entering the property had to pass through there and be admitted by the gatekeeper.  So in some ways, nothing much was changed!

We only spent about half a day there, but it was so picturesque and quiet, and the people were so incredibly nice, that it felt like a big part of our trip.

Oh Ireland, we miss you!
Posted by Bridget at 5:06 AM
Labels: Ireland

The village looks like a delightful place to explore.

My screensaver shows our Irish scenes but I'm used to my pictures. Yours made me miss Ireland too. sniff.....

WOw, I only see images of green fields and cottages so seeing the town was fun!!!
I love the church interior you shared.