There Has Been Knitting ...

Yes, there actually has been knitting, but after my flurry of FOs, I'm back in WIP-land.  None of the things I'm working on now are for anyone but me, so I feel no pressure to hurry up and finish - except that I've told myself I can't start anything new until something else is finished.  *That* is my motivation!

I'm currently almost [finally!] to the end of the raglan sleeve increases of my Breezy Turquoise, which I want to finish NOW even if it gets too warm to wear it until next spring again.  I do love this sweater, and can't wait to finish it, but it has been the unfortunate victim of other projects taking precedence, and then lack of knitting activity altogether.

And the two new things I've started are a pair of socks: 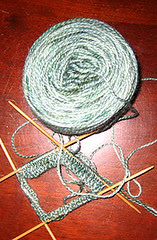 This is the beginning of my Apple Pie Circus socks, using Apple Laine Apple Pie yarn that I received a few years ago in a swap.  It's so soft and yummy, and the color is more green than in this photo.  I'm knitting these for The Sexy Knitter Second Quarter KAL on Ravelry.  The pattern is Cirque Socks, and this is actually the second cuff.  Since I have two skeins of the yarn, I knit one cuff, then the other, one leg and then the other, etc.  That way, when I finish sock #1, all that is left on sock #2 is the toe, which means no dreaded Second Sock Syndrome. This is  a pattern called Ocean Waves Scarf, which is an old house pattern at Rosie's. I'm calling this my Delaware River Waves Scarf, because the yarn is some Black Bunny Fibers Merino Laceweight, in the colorway Ben Franklin Bridge.  Since the Ben Franklin Bridge crosses from Philadelphia to New Jersey, I have christened mine as such.  This took me a while to "get" but now I have the pattern seared into my brain, and am enjoying it so much.  This will probably be my at-home project, to work on when I'm not in the mood for anything else, and don't want to have to concentrate on my knitting pattern and nothing else.  I think it's turning out to look so pretty, I can't wait to wear it ... NEXT Spring!  :-)

Another thing that is making me happy is that the yarn for the socks and the scarf is from my stash, so even though the dent is really not noticeable, it's still a dent!

So, I'm knitting away, and enjoying it, but it might be a while until any of these are FOs ...
Posted by Bridget at 7:44 PM
Labels: knitting, projects, scarves, socks, wips

Beautiful projects.
Hugs to you,
Meredith

Nice variety of projects in process! You'll have a plethora of FO's when you're done.

I've tried that "nothing new until I finish something" but I cannot make myself keep to it!!