For the record, I do remember that I started this blog mainly to talk about, as well as show, my knitting.  Being me though, it also included everything else, because I am a slow knitter, and I like to write.  But I still refer to it as "my knitting blog," and in that vein, I think you deserve to know what is going on with my knitting.

The short answer:  Not a lot.  I'm enjoying looking at yarns, reading magazines and books with new patterns, and thinking in my head about what I want to knit.  But actual knitting is no happening all that often.  For the most part, it's been due to my arthritis.  For a month  or so, it was bothering me so much, I could barely hold the needles for five minutes at a time.  Fortunately, things have improved as far as that goes.  And I *do* knit, I just haven't made tons of progress on anything.

Having said that, I know you would like some pictures, so here we go.  Remember this post?   Well, nothing new has been cast-on (probably a good thing), but some changes have occurred.

First up, my Breezy Turquoise.  When last discussed, I was nearly finished with the raglan shaping.  Well, I did [finally] finish that, and have made it as far as the shaping under the arms: 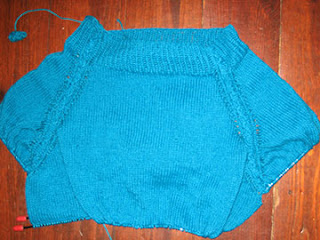 What can I say?  Slow and steady is apparently the only thing that is winning this race.  Fortunately, spring and summer come around every year.

Next, I had signed up for the Second Quarter KAL in the Sexy Knitter Ravelry group, and had started with the Crosswaves Socks pattern.  Well, that was just too much for my brain at the time, so I moved on to the Cirque Socks.  Turned out, that wasn't gonna happen either.  So I quit the KAL and decided I would just knit another pair of Hedgerow Socks.  I'd knit a pair a couple of years ago for a gift, and really liked the way they turned out.  So now this is yet another start: 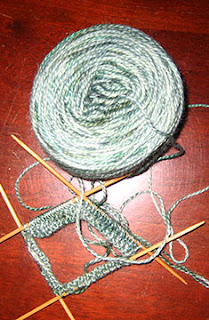 Actually, I'm a little bit past this point.  And I'm actually enjoying this time around, which is what it should be all about, right?

As for the Delaware River Waves scarf, it still looks just the same: 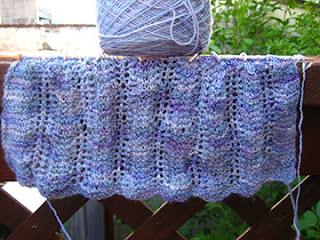 I'm trying hard to focus on the sweater and the pair of socks, so it hasn't gotten much love lately.  But it's happily and loyally waiting its turn.

Such is my knitting.  You?

Well, you know, we are opposite. I read and blab about my knitting but rarely talk about reading.

When I'm not blabbing about spinning-

You poor thing, arthritis is such a pain, literally. When you are feeling better knitting is actually good for your joints as it keeps things moving and that is great, but when you are in a lot of pain you are so smart to take time off until the inflammation goes down. Love all your works in progress.
Hugs,
Meredith

Oh gosh, it's so affirming to read that another knitting blogger isn't knitting. I'm sorry your arthritis is getting in the way; I am just too busy and when I do sit down, I lack the energy and the mental faculties to knit.

I'm knitting on, mostly because I've got no silly job to otherwise fill up my time.

At least you know where your knitting is, that's a start!! LOL I hear you with the socks. I need mindless knitting. I tend to drift off in my knitting and then drift back in. Patterns are not a good idea when you mindlessly drift. Sry abt the arthritis. That has got to stink!!! Yes it's a knitting blog, but I do enjoy your other posts as well so keep going!

If it makes you feel better, I've been knitting the same pair of legwarmers for over a year. Last summer I told myself they would be done in time for winter 2012.

My biggest reason for delay, though, is that after I completed legwarmer #1, I realized that I have very meaty calves that do not look pretty in chunky yarn legwarmers. Crap. And I knitted them in the round, which means that if I slip them over said meaty gams, they just get shorter, which emphasizes the stockiness. Double crap.

I'm sorry about the arthritis. Hope the pain eases up a bit so you can resume one of your projects!