This Time I Am Prepared

I realized one day last week that my blogiversary is coming up - which is pretty amazing, since the last couple of years, I missed it!  It's funny, I used to hear from a lot of people via my blog, but not as much anymore, I think Facebook has replaced blogs for a lot of people.  Not for me, though!  I *love* when people leave comments, but I also write this as much for myself as anyone else.

Anyhoo, we have been fixing up the room in our house where most of my knitting-related books and all of my stash lives.  Which means I've gone through both of those, and have some things that I have decided I'm just not ever gonna use one way or another.  Since this is all happening now, I thought it might be fun to have a blogiversary giveaway with some of those goodies as the prizes.  I'm still pondering how I'll do it, so if you want the chance to get some nice yarn and/or nice books/patterns, stay tuned!

Also, do you remember this sweater that I started long ago, and picked up and put down a number of times: 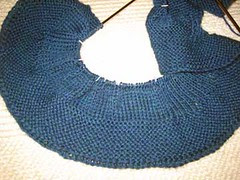 the pattern is from Knitty, and it's Amelia by Laura Chau.  I've been using some Cascade 220 Heather yarn in the colorway Mallard (which is more of a dark blue-green than the photo shows).   I truly love the yarn, but became less and less fond of the project every time I'd pick it up.  So I decided to deep-six it, and use the yarn for some future project that I just cannot wait to make.  The funny thing is that when I was frogging it yesterday, I realized that it was a good thing I was doing so anyway, since apparently every time I picked it up (and there were some long stretches in between), I had a slightly differing gauge!  If I had soldiered on, and noticed that at the end, it wouldn't have been pretty, let me tell you.  So rather than seeing it as a project that failed, I'm seeing it as a project saved.  :-)

Another good thing (I'm just Little Mary Sunshine today, aren't I?) is that now I only have three active projects: my Emerald Hedgerows ('cause I always like to have a pair of socks on the needles.  I also realize I need an updated photo), my Delaware River Waves Scarf (for which my self-imposed deadline is next spring!), and my Breezy Turquoise, which I am hoping big-time that I will finish no later than the first day of fall, so I can just pull it out and actually wear it next spring.

Other than that, I have a couple of ideas for things in my head that I want to see if I can figure out how to put them on paper and then translate to needles.  My math skills are non-existent, but I'm thinking that if I have real trouble, I can ask some of my friends who design things regularly for some help.  And if all else fails, I'll get The Tim to assist me ... I mean, he has to be good for something, right????

Enjoy this last day of the weekend, and I'll see you in another couple of days with blogiversary info.
Posted by Bridget at 1:37 PM
Labels: 2013-knitting, blogiversary, contests, knit-fails, knitting, projects, stash, wips

I don't have a Facebook account and don't care to get one; thus, my blog continues to be the record of my projects, old photos, memories, etc.

Congratulations on your blogiversary!

Everything else is a time-suck.

And I'm sure the Tim is good for alot of things!

Nope, not Facebook. I occasionally venture in and then flee. It's more Ravelry/Real Life that sucks up all my time. It's kind of horrid too because I miss seeing you but OTOH, I haven't updated my blog in months either.