As in "close, but no cigar."  At least not yet.  I got going pretty quickly with my knitting in January, finishing my hat at the beginning of the month.  Having successfully completed it, I was really motivated to finish my Emerald Hedgerows socks.  I started them back in July, and then I put them aside to concentrate on some other things.  I really want to finish them, as I would like to actually wear them, you know?  So I picked them up, and was going along pretty well, until my stupid arthritis flared up, and I had to only work on them occasionally.  So January ended, and they were still underway.  But there's hope, as I am at the beginning of the foot on one sock, and this far on the other one: 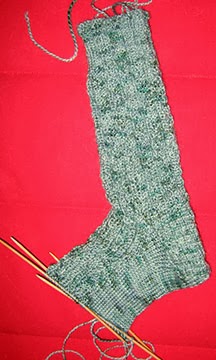 So I figure that unless I forget how to knit, I should have them finished by the end of February.

And at the moment, I'm swatching for what I think will be my next project, Agnes.  (Though I'm not sure why I'm tackling another sweater, since my last couple of attempts have failed.  I guess hope actually does spring eternal ...)  I've read some of the notes from others who have knit it, both on blogs and on Ravelry, and I think I'd like it to be a little bit longer and not really as flared out at the bottom, which are fortunately both easy modifications to make.  I bought the yarn and the pattern a couple of years ago, so it's about time I got moving on it!  For the sweater, I'll be using this: 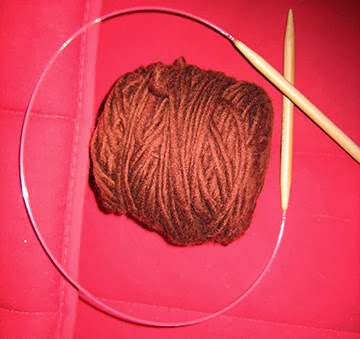 (Puffin, from Quince & Co., in the Gingerbread colorway)

The contrasting pockets will be the same yarn, but in the Parsley colorway.  From everything I've read, this sweater is a quick knit, and goes smoothly.

Bridget- Hopefully your arthritis won't give you a hard time. You can easily finish the socks.

The sweater looks interesting. Why do we keep on? Because knitters are eternal optimists.

I love the yarn for your sweater - lovely colour!

You are on the home stretch and will have the socks finished soon.

I've never thought about checking for project notes on Ravelry before beginning a knit.

Is there anything I can do to help you? Hang in there. . .

I love your sock progress. Sweaters are kind of daunting to me; i cannot wait to see your progress

Agnes is going to be a great knit, I think you could even go with a tunic length and it would be wonderful.