Well, I didn't mean for it to be so long between posts - I'm surprised to be honest, I didn't realize I hadn't been here for a while!  Oh well.

Today and Monday are days off for me, and for a lot of other people.  My work and my home are right in the spaces where the Pope will be starting tomorrow.  As a result, there are a lot of intense security restrictions (thanks, ISIS) and also a lot of people left town, both due to expected crowds and because they had to get their cars off most of the streets.

This morning I took a walk, and it was AMAZING to see the city so empty, and best of all NO CARS.  A lot of people in our neighborhood have cars, but don't use them daily.  But of course many people commute by driving, and living in the city, there are cars, trucks, vans, etc. all of the time.

Anyway, here are scenes from today. 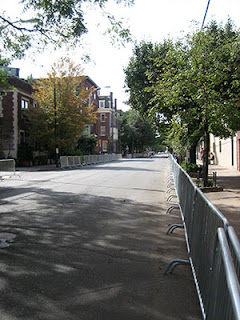 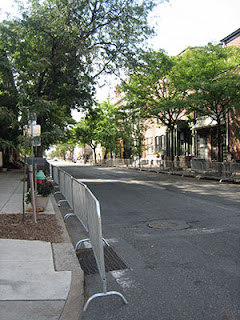 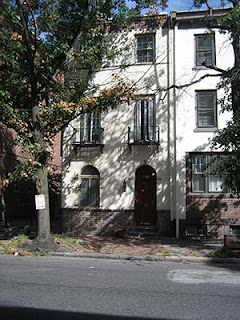 That white sign on the tree in front of this house says "No Parking."  People knew that they would be towed, so for once they actually paid attention, rather than paying the fines! 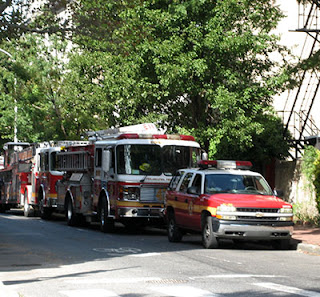 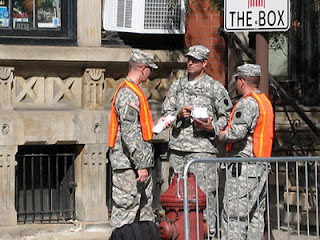 Emergency vehicles parked in a row, ready for anything, and the National Guard on each corner. 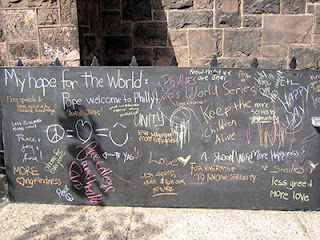 And then this blackboard sign, next to the Episcopal church up the street.  I am highly amused that someone wrote "Cubs World Series," and then someone crossed out "Cubs" and wrote "Phillies."  If only that was the biggest world problem, right?

So this is the calm before the storm.  Pope Francis arrives tomorrow, and something tells me that these empty streets will not even have an inch of space available!

But for today, it was glorious.  You could walk around and never have to wait for the light to change to cross the street, and bicyclists were not in danger of being run off the road.  It was a beautiful day weather-wise, and the hardy souls* who stayed in town were walking around, eating in outdoor cafes, many walking their dogs, and enjoying having the place to themselves.

Sometimes, even for just a day, the world works in your favor.  :-)

*I say "hardy souls" because so many people were freaked out by security plans that they could not wait to leave town.  It was like we were getting 20 feet of snow, and they had to escape or would be condemned to a certain death.  Wimps.
Posted by Bridget at 7:13 PM
Labels: day-off, fall, Pope-weekend

We just had our Pope visit. Everyone got a couple of days off work and there was no traffic on the Beltway for a change. Yippee. After getting stuck in the Andrews air show gridlock and Redskin traffic two days in a row I deserved a break. I can't believe the coverage the guy got-it was unprecedented. Everyone was completely gaga over him and that's saying a lot here in DC!

I'm sure it is a very strange feeling seeing the National Guard around, but the peacefulness sure is nice.

I miss Philadelphia so much ..............love that it is my hometown. And, it truly WOULD be a papal miracle if the Phillies won the World Series. LOL

Hope you have a wonderful weekend.

Bridget- I think one of the first Twilight Zone episodes is where there are only 2 people left on earth. It kind of reminds me of that.

I love super quiet days like that. I hope the quiet wasn't followed by too much craziness!
President Obama has been to Madison quite a few times, and they do the same thing -- just clear the streets.

I think it is exciting and I am not even Catholic. He is a good man, you can just tell and while I am a lot more liberal than the Pope, I think he can teach us all a lot.
Hugs,
Meredith

I find the whole thing fascinating. Tell us more about how the Papal Visit actually went....

I'm about 25 miles from D.C. I would have loved to go there and see the Pope - but decided to just watch it on tv from the comfort of my home. I so enjoyed every moment of it!
Cried several times!

What a wonderful walk through your temporarily quiet streets. :)

So, now that it's over, what did you think? Did you have a Pope-sighting? Hope your life has returned to normal (even though quiet, empty streets would be pleasant)!