It's been a nice fall weekend, here - particularly today, when it's been cool and breezy and makes you believe that fall may actually be on its way.

Yesterday, The Tim and I headed one state over to go to the New Jersey Sheep and Fiber Festival.  I've been wanting to go for a few years, but would never remember the date until it just wasn't possible to plan.  This year, I missed the last time I would be able to take the Rosie's bus to Maryland Sheep and Wool, so I was anxious to get to at least one fiber festival.  And when my friend Mindy said she was going to have a booth there, The Tim actually offered to go, since he only knows her through Facebook and wanted to meet in person.

It only took about an hour to get there, and though it was overcast, it was not too hot, and very pleasant for walking around.  And what a lovely event!  It's small enough that you can take your time and still have plenty of the day left, and large enough that there is a lot to see, and wish you could win the lottery to buy it all.

Here is a selection of pictures I took (I won't make you look at the many many photos of sheep, sheep - just a few!): 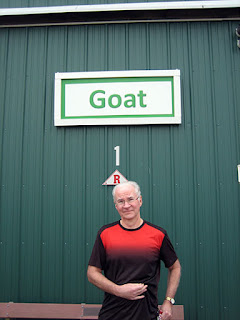 Create your own caption ... (I told him I was gonna call it
"The Old Goat goes to the fiber festival") 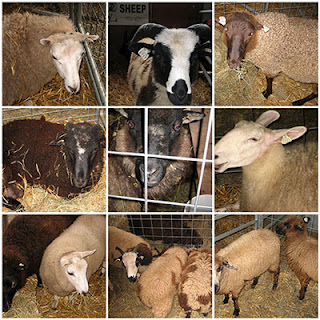 All of the sheep were friendly

This is blurry, because it was when the sheep were moving during the herding dog demo.  These are hair sheep, which I had never known about until yesterday. 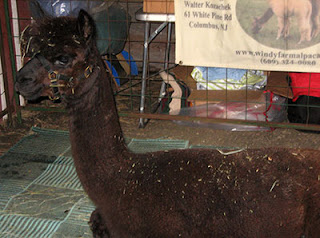 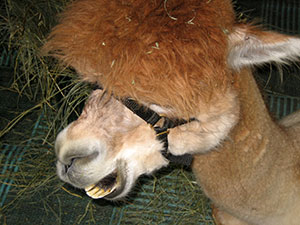 The alpacas had just been sheared and were rather blase about the whole thing. This sweet bunny LOVED being petted and wanted all the attention. 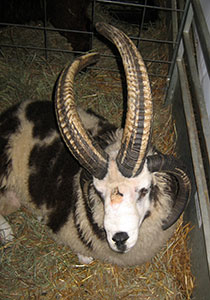 Then there was this guy - I decided I if I lived anywhere near him, I would always try to stay on his good side ...

Me, Mindy, and her two sons and assistants in the booth, Eric and Owen.  They are two of the nicest kids I've ever met. 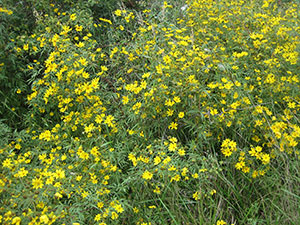 Last picture of the day - wildflowers next to the parking lot.  A good way to end, right?

I didn't buy anything, because I forgot to take any more than about $5.00 with me!  I just was not organized about it at all, and didn't want to use a credit card, even where they were OK, since I currently have lots on my credit card due to vet visits.  But you know what?  It's fine, because I have plenty of yarn, and I'm already planning for next year.

It was still an amazing day, just getting see animals, yarn, and other beautiful things.  You can't ask for more than that.
Posted by Bridget at 7:11 PM
Labels: nj-sheep-fiber

I was at the Wisconsin Sheep and Wool Festival while you were at the one in NJ! I should go without cash next year!

I wish MDSW was in the fall. It's a fabulous fest but it's hard to get excited about wool in May. The Old Goat photo is too funny!

Proof you don't have to spend a lot of to have a good time! Love that bunny!

Bridget- I love the smaller events. Looks like a great day out.

(lol about the goat)

This was my first time also, and I only live about 15 minutes away! I thought that multi-horned sheep was really unusual, loved the sheep herding dogs, and Mindy has some amazingly soft yarn. She should sell mini-skeins just for petting!

Great post. Our buns at the wisconsin Festival were tame and soft too

I always love the animals better than the yarn anyway! And I especially love watching the sheep herding. Those dogs are AWESOME! I think your yarn-not-buying strategy was a very good one. I, too, have plenty of yarn in my stash and really don't need to buy any more. :-)

I like your caption for The Tim just fine! Sounds like a wonderful time and the pictures are great. You're thinking positive about not getting stuff, but really ... you're right. :)

Just being there would be reward enough. Good for the Tim going along, he is a keeper.
Meredith

just being there was enough! I usually do not spend much at festivals but I love to take in the sights and the sounds!

I'm sooo jealous!!! What a fun day you had! I love all the crazy looking animals pictures (and "the old goat" picture too hahaha). Isn't that something about Notre Dame! What a fun start to the season, and how impressive a start for the new QB. Gooooo IRISH :) BTW have you read any of the Ian Rutledge mysteries? Set in post WWI England I'm really loving this series.