Well, I didn't mean to be incommunicado for so long - I didn't even realize until today that it had been a week since my last post!  I'm guessing that you all managed to survive nonetheless, so that's good ...

Since I couldn't come up with anything even close to ten things for this week's Ten on Tuesday, I decided to tell you about the highlights from my birthday week.  Due to a clerical error at work, I suddenly had five days of vacation I didn't have before - however, the catch was that I needed to use them before the end of March, or I would lose them.  The thought of LOSING vacation days is a complete anathema to me, and since I was planning to take my birthday and St. Patrick's Day off anyway, I decided to use last week for my five days.

It was amazing.  Not in any way that is thrilling to report, but it felt like a nice long time, and I found that I was sleeping better, not having anxiety attacks, not stress-eating - you get the picture.  What a lovely break it was, you know?  I just wish I had more vacation time in general so I could do it more often.  But I enjoyed it while it was there!

My birthday was lovely, if a little weird.  First of all, it turned really cold, and rained pretty hard all day long and into Tuesday morning.  Ick.  The Tim was not able to take the day off with me, which in and of itself was not a big deal, but he had to work inventory at the bookstore, which had been scheduled months ago, and no one was excused.  So he worked from 4:00 p.m. on Monday until about 4:00 a.m. on Tuesday morning!  As a result, we went out for a lovely birthday lunch instead of dinner, and had birthday cake before he left for work.  Then on Tuesday, he slept for a while (obviously) and then had to work the closing shift that night (3:00 p.m. until 10:00 p.m.) - so I was on my own for most of Tuesday.  But I got a lot of reading done, got a haircut, and hung out with Dug and the kitties. Very nice.

Thursday I made a batch of Irish Soda Bread, which turned out particularly well.  I also met a friend whom I seldom get to see for lunch, and we had such a great time catching up!  She can really only meet during the week until about 2:00, and not on the weekends at all, due to being the primary caregiver for her husband, so we don't get to talk in person very often.  We had a lot of laughs and some pretty amazing food.

Saturday, it was St. Joseph's Day, so we headed to Termini Brothers in South Philadelphia to get a couple of zeppoles. 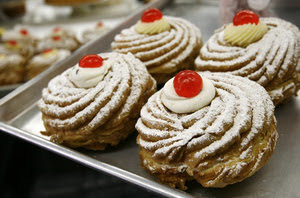 After that, I stopped at Loop to see the spinning exhibition they were having.  I am fascinated by spinning, and would love to know how.  They are having a three-Saturday spinning class since there was so much interest, so I signed up.  I sincerely doubt I'll ever become an amazing spinner, but I would at least like to know the basics.

Then on Sunday morning I met with another friend for coffee and some knitting.  After which I went home and watched a couple of March Madness basketball games.  Some of my favorites were already out of it by Sunday, but some advanced, so it was a good day overall.  :-)

Now of course, it's back to the usual, though Easter is this weekend (how is it here already?), and my niece and her husband will be visiting from Baltimore, so I have something to look forward to; plus, I am trying to come up with designs that are actually doable for me for the Inappropriate Easter Egg decorating that will ensue.  I have lots of ideas, but since I am not too great at drawing, I end up letting most of them drop by the wayside.

I hope someday that I will have the chance to take an unexpected, nice long break again.  Sometimes not having all kinds of things planned for every minute makes the time even more enjoyable, you know?

Finally, a huge THANK YOU for all of your kind birthday wishes!  I so enjoyed reading them, and it was a lovely bright spot on such a rainy day.  Thank you thank you thank you!!
Posted by Bridget at 2:07 PM
Labels: blog-friends, friends, March-Madness, my-birthday, st-josephs-day, st-patricks-day, vacation, zeppoles

If I can spin anyone can. It's like riding a bike. Once you have your aha moment you can spin anything. It took me about 4 years of trying every once in a great while until the lightbulb came on.
Those zeppoles are criminal. I need one NOW...as she runs off to find a recipe.

How about that TEMPLE game??? Sheesh! I thought Steve was going to have a heart attack when the DVR stopped recording as the game went into overtime. Fortunately, his dear, dear wife thought ahead to record the NEXT show too.

Even though the game did not end in our favor, he sure did enjoy watching it.

Glad you had such a wonderful week off.

Happy week AFTER your birthday! :-)

I think unexpected days off were a complete birthday bonus. Good for you enjoying your time and treating yourself to good food, friendship and time to yourself. Happy Easter!
Meredith

Im so glad you found out and did not lose your WELL DESERVED vacation days. That would have been awful.
Those shifts are so brutal, I know from night shift as a nurse. Glad you worked and played around it!
May it be your best year yet!!

happy birthday and how nice to be near a fab knitting store! my dream :)

Sounds like a lovely, unexpected week! What fun! Glad you had a bunch of different things to do, people to see, etc.

I love you got a few extra days off. It sounds like it was a good time spent! And nothing is as fabulous as some good rest and sleep after a track of crappy nights and stressful days. Wishing you more of the good stuff.