We arrived home about 3:30 yesterday afternoon from our overnight trip to Baltimore.  It was a bit whirlwind, but one of the best times we have ever had, and I think The Tim is likely to remember his 60th birthday!

After we arrived on Saturday, we headed out with my niece Liz, her husband Greg, and my great-nephew Zach, who is ten years old.  He was telling us all about how, after we got home that evening from my other niece Amanda's house, his friend Evan was coming to spend the night. Then he was talking about some of the things they do together and I mentioned that it sounded like Evan was a pretty good friend.  To which he responded, "He's probably my best friend.  I mean, I have other friends, but to be honest, a lot of them are duds."  The Tim and I nearly fell over laughing at this, and it's still cracking me up today.

Then all of us met up with my niece Annie, her boyfriend Patrick, who we were meeting for the first time, and his kids, eleven year old Amir, and seven year old Jan (short for January), and we all had lunch together.  Frankly, the restaurant was disappointing but we had a blast and it was fun to finally meet Patrick, et al., since we have heard so many good things about them.  He is a sweet guy, and everyone his hoping things will continue to go well, because Annie has a history of, shall we say, "duds."  ;-)

The rest of the afternoon we caught up with everyone's news at Liz's house.  Then we headed to my other niece's Amanda's house, where it turns out that she and the others had their party for The Tim.  It was quite the event, let me tell you!  I was so busy laughing, talking, singing, eating, and drinking that I ended up with only one picture from the evening, which didn't even turn out that well.  But Amanda took this one, which I figure you'll enjoy seeing. 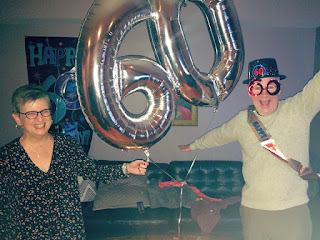 (Believe it or not, this was at the beginning of the evening ...)

The food, the drink, the decorations, and the company was just wonderful.  We saw a slideshow of The Tim's "greatest moments" with the nieces, which was both hilarious and touching.  We all did The Mannequin Challenge, which took quite a bit of discussion, since everyone had different ideas  - and then we had to explain it to The Tim.

Before we headed home yesterday, we took everyone (including Zach's overnight guest) to brunch, where we had fun hearing about the plans for Thanksgiving.  All of them alternate holidays between my sister and brother-in-law's, and their respective in-laws.  Since this is the in-law's turns for Christmas, everyone will be at my sister's, as well as my brother-in-law's family and their kids and grandkids - 40 people in all!  I'm sure it will be crazy fun.

In a way, this weekend was our holiday visit.  We won't make it to see anyone for either Thanksgiving or Christmas, so this was a treat.  Both of us really enjoy spending time with my family, and unlike a lot of other families, we are fortunate since there are no Big Problems among any of us.  And now we get the best of both worlds, with a fun visit with nearly everyone, while also still being able to have our quiet and cozy Thanksgiving here.

Before I forget, The Tim was truly touched and pleased with all of your birthday wishes.   He sends along a sincere Thank You, as do I.  He truly deserved every bit of extra birthday attention that was showered on him.
Posted by Bridget at 8:07 PM
Labels: birthdays, family, holidays, The-Tim, weekends

I think Tim must be very loved by his family for them to plan such a great birthday celebration! This looks and sounds like so much fun, and I hope Tim's next trip around the sun is filled with lots of the same fun and love.

Ain't nobody got time for dud friends (no matter what age you are).

Oh man! Sounds like a great weekend. Love the picture!!

Now, THAT'S the way birthdays should be celebrated!

That's the way to celebrate the new decade-in style!

It sounds like a wonderful visit, you are blessed to have a great family.