We had a lovely, if more quiet than usual, Thanksgiving.  Both of us woke up feeling slightly under the weather - not horrible, just not great.  So we did even less then we usually do (as in, usually we'll take a nice long walk in the early afternoon.  This year we barely went back and forth to the kitchen and bathroom).  The Tim took a couple of naps, and though we had our stuffing (AT LAST! and it was wonderful), and other holiday foods, we didn't eat as much as usual - or even fix as much.  Except for stuffing, which we always make in huge amounts, since we both like it left over as much as the first time ...

This was all fine with the cats.  The first sight I saw on Thanksgiving morning once I'd gotten myself up and moving was this:

We've had this pad a long time, and never before - well, at least that we could see - have two cats shared it.

The theme continued, with variations throughout the day: 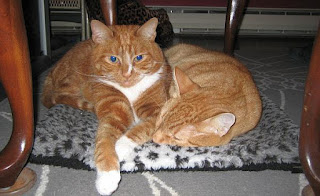 In the evening, Milo decided that he wanted to sit on my lap.  Jack was already ensconced, and before I knew it, they were both there.  And no altercations! 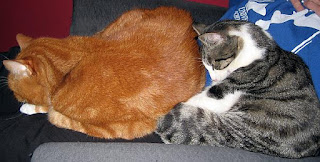 The Tim had to work the next morning, and I decided to go out to a couple of places for some specific items I wanted for gifts.  No, I am not one of the morally superior types who scoffs at the idea of going out on the day after Thanksgiving to shop.  Granted, it's not crazy in Center City Philadelphia, since most people drive to a mall somewhere, but it's still busy and crowded enough.  But I go very early, and I knew that the things I wanted to get would not be likely to be around very long if I waited.  As it turns out, I got both items on sale, so it was a worthwhile adventure.  I was home by lunchtime, and enjoyed the rest of the day reading and knitting.

The story changed late Friday night when I started to feel slightly more off.  I'd actually felt better on Friday than on Thanksgiving, and was happy to not be getting really sick.  Ha ha.  For the next 24 hours, I had a miserable gastrointestinal bug.  And only I was lucky enough to get it - The Tim was fine.  Which is a good thing, since he had to work all weekend, but I guess the bug was not the result of something I ate or drank, because we both had the same things.  Fortunately, I felt better by dinnertime on Saturday.

Lest I get through the weekend with only that glitch, though, I woke up on Sunday morning with a scratchy throat and a cough.  Which as the day continued, got considerably worse.  I lost my voice, and could barely swallow.  So I started taking some Day-Quil and rustled up some Rx cough syrup left from my last episode.  By this morning, I was feeling better though still not great, and I can at least talk well enough to be understood.  Imagine how pleased I was to come back to work [insert sarcasm].

On the plus side, I did - for real this time - finish the last of the Turn A Square hats!  I felt good enough intermittently to knit, and it worked up really quickly (at this point I think I could knit the pattern in my sleep. LOL).  So I'll show you that sometime soon.

And so.  My absolute last planned item that would be sent to the recipient for Christmas is complete.  I'm feeling really good about it.  I think I mentioned in another post that I also toyed with the idea recently of knitting a hat for my little great-niece Penn as well.  Today is November 28.  My plan is to cast on tonight, see how it goes, and if it is smooth sailing, I think I can have it knit by the end of the month.  I mean, it's a kid's hat, and I have three evenings to work on it.

Being sick on holidays/weekends is the worst! I'm sorry you were ill and hope that the upward trend continues until you're feeling completely better.

You really got hit with viruses this weekend. Kind of ruins the whole long-weekend thing. At least you got a little knitting done. I made a bunch of turn-a-square hats a few years ago. It's a nice pattern. Hope you are feeling better!

Steve and I were fine all weekend, but Giroux has been ill ever since his visit to the awful vet. The sneezing is letting up though. I'm guessing he is on the mend.

I'm sorry you were sick, sorrier that you didn't at least get a sick day out of it, but glad that you felt well enough to knit. Hooray for gift knitting being (almost) done!

No fun being sick any time of year but the holidays are especially the pits. Lucky you felt good enough to get out and get those gifts. Wishing you a speedy recovery.

Glad you're on the mend and that you were able to find the items you wanted on sale.

Love the photos of the cats sharing the heating mat.

I went to a friend's house for Thanksgiving, so no leftover dressing for me. Sigh!

Oh my, what a bummer to be ill during the holidays. I hope your week is off to a better start! Pat :)

So sorry to hear you were under the weather for the holidays. A stomach bug on Thanksgiving has to be the worst thing ever.
I think stuffing is better the next day so I make a big pot and then sneak in all day long with a spoon for a nibble at the leftovers. I even like it cold!

I hope you're feeling better! What a drag. . . Being sick is never good -- but it's so much more awful on a holiday. XO

I, too, make copious amounts of stuffing. Three huge pans. My sons take a pan home, a pan gets eaten for dinner, and Rick and I have a pan for ourselves for leftover nibbling. Heaven!

Aren't Big Orange Cats the best? My Piper is a massive marmalade cat, and he is the superior cuddler. His sister Marlowe is a grey tortoiseshell, and when I saw that picture of the two snugglers, I couldn't help but smile and think of my two pets.

so sorry you were ill during the festivities....what a bummer! hope you are better now!

Ugh. Sick over The Thanksgiving Holidays? Lame. I'm glad you are on the path to recovery and you were at least able to knit. I love all the kitty love. Also the last image sent me chuckling. I needed that, thanks.