Even though it's very cold here in Philadelphia (in the teens, and that's not counting wind chill), today is a beautiful, sunny day!  I would love to take a walk, but though I can get around pretty well, even a walk around the block would likely make me feel cold for the rest of the day, since I'd be moving so slowly.  So I'll admire the sunny day from indoors, and just be glad it looks so pretty.

Believe it or not, I have a second FO to show off!  This astounds me, since I usually am lucky to have one thing finished by early February.  But the combination of being rather home bound and not having the ability to do my usual chores due to a certain degree of immobility, has meant a lot of knitting!  So here is my latest finished project. 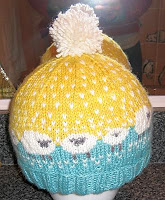 Project:  Bluegrass Baa-ble On a Sunny Day Hat
Pattern:  Baa-ble Hat, by Donna Smith
Yarns:  Fibre Company Canopy Worsed, in the following colorways:  Tanager (blue), Lemur (gray), Orchid (white), and Turmeric (yellow)
Needles:  US 4, US 6
Modifications:  A friend had made one of these using the size 4 and 6 needles, and said they made a better fitting hat than what the pattern called for, since everyone was complaining that the resulting hat was too big.  So I took her advice and used those needle sizes as well.  I also did a 2 x 2 ribbing because I thought I would like it better than the 1 x 1 ribbing called for in the pattern.
Comments:  This hat was fun to knit, though also challenging.  It is only about my third fairisle project, so there is definitely room for improvement, but I'm really pleased with how it turned out.  The pattern is very straightforward, and the two biggest challenges for me were the chart, which printed so lightly, it was difficult to tell the contrast in yarns used in any given row.  Fortunately, The Tim fooled with it, and got it both clearer and larger, so I could read it more easily (not being a chart person most of the time, I can get easily flummoxed by them!).  The other challenge were a few rows where, instead of only two yarns at a time, you were using three.  I'm not sure I did it "correctly" but I got it to work, so that's fine with me.  :-)  I had downloaded the free copy of this pattern a few years back when it was available for Shetland Wool Week; I notice it's a paid-for pattern now, so maybe the charts, etc are clearer, who knows? 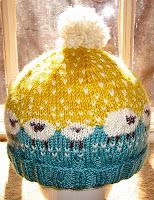 This was yarn I had purchased for to make this pattern a few years back, so it counts as knitting from stash, which also pleases me.  I have enough left for some other smallish project too - if nothing else maybe some stripey mittens.

I found that having a fairly simple project, like basic socks, and another more "thoughtful" project, is working pretty well for me.  Sometimes, I am not really in the mood to read, so I'll pick up the project that needs more of my attention and work on it while listening to music or an audiobook, or when I'm not 100% engaged in something we might be watching.  This hat didn't take me long (~2 weeks of non-monogamous knitting), but I did have to pay attention to the chart, so I'd usually work on it when I was alone.

If you've been thinking of trying this pattern, I'd recommend it.  The chart was understandable (once I could actually see it better) and it was fun to watch the sheep appear!  And it is a good way to practice some fairisle on a reasonable scale.

That's it for now.  I hope you have a good weekend, whether or not you also are having a sunny day.
Posted by Bridget at 2:18 PM
Labels: 2017-knitting, fairisle, fos, hats

A friend gave me one of these hats, and it is large. I love wearing it. She used the remnants for a headband with the sheep in the center - really cute.

I love your little sheep! I need to go dig out my sheep hat. I forgot all about it.

But, the million dollar question: does it fit YOU?

I just love your Baa-ble hat , great colours , it is beautiful ! Thanks for the tip re the needle size . This hat has been in my queue since it is first released as a freebie.

This is so adorable, I love the yellow-indeed so sunny.

That is an adorable hat! Those sheep are charming. Nice job.

I'm with Vera--the colours are perfect.

Love the colours you chose for your baable... so cheery!

I don't do colorwork, but that hat is cute enough for me to consider dipping my toe in.

nice hat! I loved that pattern and knit it three times :) It was freezing here on Saturday and today it's supposed to be nicer, let's hope so!

Adorable! I love the bright and cheery colors you chose. Just perfect!

Beautiful hat! It is on my knit list, but I won't be getting to it anytime soon! And YAY for FO's!

I love this hat SO much! I love our colors and am inspired to do one, one day, some day :)

You did such a great job on the hat! I love the colors you used, too, so different from any of the hats I've seen in this pattern. Nice to hear the suggestion on needle size as one of these days I want to make one, too.