I didn't mean to be incommunicado for so long.  I thought I'd post over the long weekend, but obviously that never happened.

The weekend was nice, but exhausting, at least for me.  The weather was so nice here on Saturday, we went for walk in the afternoon.  It wasn't that far, but since I haven't really been walking around outside with my crutches and cast, it was more effort than it would have been otherwise.  Sunday, I also decided to take a little walk while The Tim was at work.  Sunday evening, we had tickets for "Alan Cumming Sings Sappy Songs" and since I was off work the next day, and the evening was lovely, we walked back and forth from the concert.

Which by the way was WONDERFUL!  We are fans of Alan Cumming's and he did not in any way disappoint.  He mostly sang, but it was interspersed with stories and anecdotes and he can be really hilarious when he gets going.  He was on stage for 2 1/2 hours straight with no intermission.  It's also funny when you have seen him on American TV shows (such as "The Good Wife"), and then his normal speaking voice is with a Scottish accent.

Monday, The Tim wasn't on the schedule to work, and he wanted to go over to NJ to an outlet mall there.  One of the stores is a Corning Ware outlet, and he had a coupon, so he wanted to use it for some things he'd been wanting to get.  I went along for the outing.  So even though it wasn't constant coming and going, it was a lot of activity for me, and so my other activity involved sitting.  A LOT!  :-)

I'm knitting away on my Hermione's Socks, and am nearly finished with the first one.  I like it, but it's funny when you have been knitting so much with either variegated yarns or using several colors, how knitting with a single color seems weird.  The yarn I'm using is pretty, but I keep thinking, "Wow it's just blue all the time" - which shouldn't be so surprising!

The other project I had re-started has been frogged and the yarn discarded.  I managed to memorize the stitch pattern, so that problem had been resolved, but the yarn kept breaking every two rows or so.  There was no sign of moths, so I don't know if it had been wound in a center pull ball for too long, or if it was just not that strong to begin with.  It was disappointing, because I really loved the colors in the yarn.  But after I had 10+ ends after 15 rows, I decided it was just not gonna happen.

Which means I have to decide what I want my "other" project besides socks to be.  There are about 5 things I'm really itching to try, but not a single one is crying out to be knit.  If I haven't decided by the weekend, I'm going to put the pattern names in a hat and draw one ...

I'm also busy taking out the messed up border of my Park Slope Blackbird (aka Multnomah Shawl), which is both tedious and time-consuming.  I'm trying to be really careful, so I don't confuse myself even further once I get to the point where I'm good again.  I really really really want to get it right, as I love the way it was looking and the finished one that inspired me a few years back at Maryland Sheep and Wool was stunning.  If once I can finally start the border over again, I can't get it right, I may consider just leaving it off.  It wouldn't look as nice, but I could finish it and enjoy it.  We'll see.

I think part of the problem with making the decisions on what I should/should not knit, or how I should try to knit it, has to do with the fact that I'm knitting for me!  It's much easier for me to decide on things when they are for other people, even when knitting isn't involved.  But let it be about me, and I change my mind a million times, and then fret unnecessarily once I make a decision.  Because my brain enjoys obsessing over every little thing whenever possible ...

At least I have the cats to distract me. 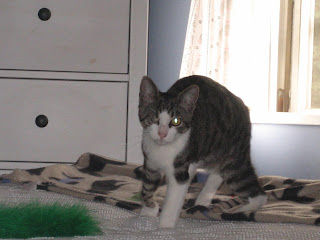 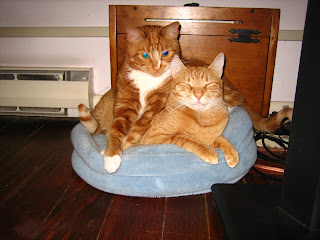 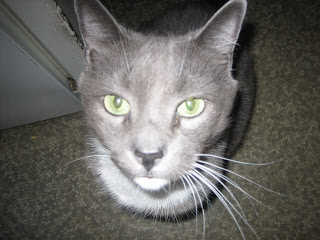 Those are some pretty cute distractions!

The ginger kitty on the bottom looks a LOT like Marmalade from the Cole and Marmalade website.

Your fur-babies are adorable!

Yikes, knots so often would make me cranky. You were more patient with the yarn than I would have been. I've had the shawl pattern for years, but it just doesn't get passed the "wishing" state. I hope you can add the lace border without any more frustration.

That's a lot of kitties!
I am where you are with my projects. Several are coming to an end and I don't seem to be able to decide where to go from here. Mainly because I need NOTHING. I have so much of everything already. This winter was such a bust here that I can't imagine having the need for anything warm or woolly. Maybe I need to look into some warm weather projects.

I'm sort of losing my knitting mojo at the moment. I think it has to do with the weather. Most of the projects I'd been queuing in my mind . . . are just to warm and woolly for the current weather pattern. I'm thinking I need to rethink my next project and . . . lighten up!

Oh, how I love a Scottish accent. It's my favourite of all time, I think.

And those MARMIES!! How do you ever get a single thing done with them around? They are too much. I'm closing the Comments box and going to look at them again (and I have one of my own!).

And your Park Slope Blackbird is gorgeous - great color. Hope you are successful in ripping back and re-doing. It is a pattern I've had forever...I may need to make that after I finish Oaklet.

Glad you had such a nice (but tiring) weekend.

Your kitties are adorable and I'm in awe that you are taking walks while on crutches!

I wish I had some cats but I'm allergic! Frodo is like a cat in that he is cat sized :) I love thinking about what I will knit next, it's almost as good as actually knitting.

YOu have been very busy getting out and about. I am having knitting indecision myself. I have started a sweater twice with this beautiful gray yarn, and am about to frog it and start another pattern. I just can't find the right one.

It will be fun to see your Multnomah Shawl when it's finished as I made a small one a while back for my grand daughter. I can kinda relate to your walking issue as I sprained my ankle a couple Sundays ago. Not fun. Glad you are healing well! Love your kitty pictures!