Our Easter weekend was different than it usually is.  For years, my niece Amanda and her husband Pat have come for the weekend and we celebrate together, the highlight being the Annual Inappropriate Easter Egg competition.  This year, Amanda had to work on Saturday, so we were on our own.  I had taken Friday and Monday off, and after thinking about it, decided what the heck, I was still not gonna go into work on those days!

Things started on a positive note, when I got a haircut after work on Thursday that I really liked.  (A story for another day, but I'm still really pleased with it.)  Friday, I didn't have any specific plans, but figured it would be a good idea to get some Easter candy before the last-minute.  Since I was only buying some for us, I didn't worry about not being able to find things we liked.  It was a sunny day, so I did some walking around too, which was pleasant.  I also had to have an x-ray and some bloodwork taken care of, so I did that before anything else, and it was nice to get it out of the way.

Saturday morning, we had an appt to take Jetsam to the vet.  Poor sweetie, he hasn't been in years, between Pip being sick with urinary issues a couple of years ago, and Dug being sick last year.  The good news is, he's healthy overall.  Like Pip though, he has tooth reabsorption, so not only does he have to go back to get his teeth cleaned, he'll have to get some removed.  Poor Jet, his mouth has probably been hurting him for a while.  We agreed that his greatest strength as well as his biggest fault is that he is not a squeaky wheel.  He's such a chill kitty, and so good, a lot of the time he doesn't get the attention he deserves.  Of course he won't be happy about the attention he'll be getting, but he'll be happier in the long run!

The rest of the day was spent on stuff like laundry, running some errands, and watching some TV and movies we'd taped.  I kinda sorta finished the socks from Tuesday evening's post (yet another story for another day).  Relaxing and enjoyable.   We also had our Easter dinner that night, since The Tim had to work on Sunday.  (I feel about scalloped potatoes on Easter the way I do about stuffing at Thanksgiving - I start thinking about it weeks before, and can't wait!)

Easter Sunday, although The Tim had to work, he didn't have to be at work until 10:30 a.m., so we walked around the corner for breakfast.  Then we came home and let the kitties see if they Easter Bunny had stopped by.  Apparently, we were all worthy in his eyes. 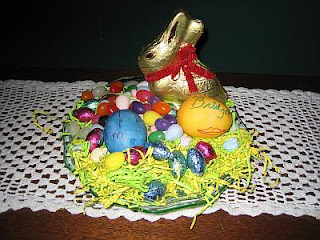 The Bunny left treats for me and The Tim!

And each kitty got a basket, as well as some treats. 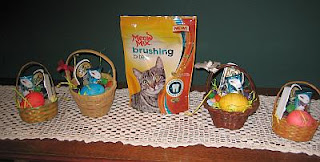 This was Jack's first Easter, and he found it very exciting and curious!  They all had to inspect things. 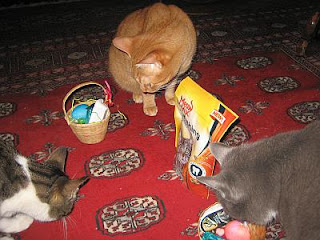 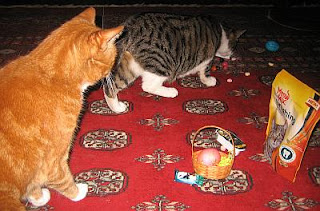 Milo the Koodle, concerned because Jack had knocked over a basket (while Pip the Narc commented in the background!)

And then Jack discovered that jelly beans had the potential for hilarity. 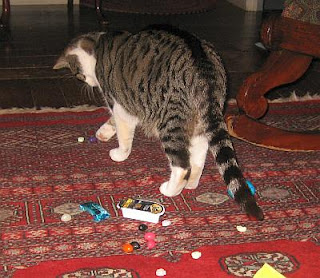 (With Pip the Narc again commenting the whole time ...)

The Tim headed to work, and Jetsam, Jack, and I headed to the garden to do some cleaning up.  They mainly lounged around while I put some swept up leaves into trash bags.  (Pip and Milo kept acting like they wanted to join us, but would chicken out when I opened the door!)  Once that was done, I had reached a level of tired where I needed to stop for while, so I came in and took a break.  Then I took a walk, which was lovely and fun, seeing everyone in their Easter finery.  I did miss having Dug, dressed in his bunny ears, to walk with and enjoy the day.  Later The Tim got home, and we toasted the holiday with some wine.

Then on Monday, it was down to actually getting some things accomplished.  I cleaned out some junk from the basement, and cleaned up in our bedroom, where I had been more or less piling stuff since I broke my ankle in January.  It felt good to get those two things out of the way.  In the afternoon, I had a physical therapy appt, and then I purposely did nothing else, since Tuesday meant back to work.

So it was a really nice long weekend, with a combination of "working" and relaxing.  It felt like a nice break and except for Sunday, which was way too hot, the weather was pretty enjoyable.

It would have still been more fun to have our company, but we ended up with a perfectly happy Easter weekend anyway.  You have to know how to make things work if you want to enjoy life, you know?
Posted by Bridget at 6:40 PM
Labels: cats, Easter, holidays

I like your approach to the long weekend, with work and rest interspersed. I don't think it's fair to your readers to introduce the Inappropriate Easter Egg Competition but fail to elaborate on it, so maybe that can be added to your list of stories for another day? There are quite a few of them to be told!

Your Easter Weekend and mine feels similar. Not quite what I would normally expect from an Easter weekend but still good stuff. Wishing you happy, Bridget.

Glad you had a nice weekend! Sometimes a bit of a change can turn out well; it's all in your point of view. Love the cat pictures!

Your kitty baskets are hilarious! I never thought of doing that for the critters. I'm going to file that idea away for next year.

You are the best Kitty Mom ever!

I love weekends like that --- long, relaxing, productive, and unpressured! Dellightful! But . . . I'm with Bonny. I want to hear about the Annual Inappropriate Egg Competition. With photos, please. :-)

I, too, love the Kitty Easter Baskets! And poor Jetsam. Colin & Mailing found that Talbot needed some teeth removed a year ago. Since then, he has been a much, much happier cat. He must have been in a lot of pain and, like Jetsam, never complained. Glad you had such a nice weekend Bridget - it all sounds perfect.

Your kitty baskets are to cute! And, sometimes a long weekend of varied things is the best!

I love that your cats got a visit from the Easter bunny! how sweet and nice :) I think you got the best treats though -chocolate!!

Sounds like you had a great long weekend....now tell me more about this Inappropriate Easter Egg Competition. ;-)