We arrived home this past Saturday, late afternoon, from our week in Puerto Rico.  The whole thing was perfect - no problems on either of our flights, no problems with reservations where we were staying, and the weather was great.  One day it was slightly humid, but it was mostly in the high 70s/low 80s, and though it would rain a few times, it was 15-20 minutes and then the sun came back.

We had lucked out because we got some nice deals on places to stay that we otherwise would not have been able to afford.  These are the kind of places that some people might always visit, but for the four of us, it was a real treat!

Our first place was in Fajardo, which is a really lovely waterfront town about 1 hour from San Juan. 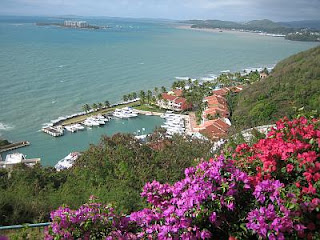 After we checked in, we walked on to the hotel balcony to take a look around, and find a spot for some late lunch/early diner.  The view is shown above. 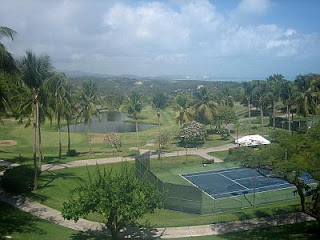 Our room had what was called "the garden view."  In the background of the picture, you might see some teeny tiny white things - that's the skyline of San Juan!

The resort was just beautiful - there was even a resident kitty, named Dottie!  She especially liked us. since we had cat treats. 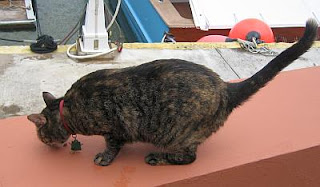 We had made reservations to take the ferry to Palomino Island on the second day, and go horseback riding.  Unfortunately, the trails were too wet (they go up along mountain trails on the island), so they didn't want to risk the horses getting injured.  All of the horses are rescues, and they rehabilitate them and socialize them.  At this time there are sixteen horses (and I realize that my niece Amanda is the one with all of the horse pictures on her camera!)  But it was still a wonderful place to spend the day, and besides the horses, we saw a lot of other critters! 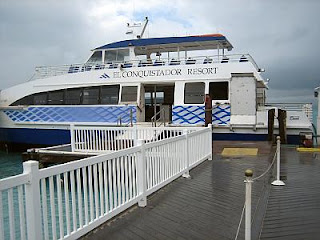 The ferry at the dock.  The ride both ways was kinda crazy, since the water was really choppy!

Here are some of our first views of and from the island: 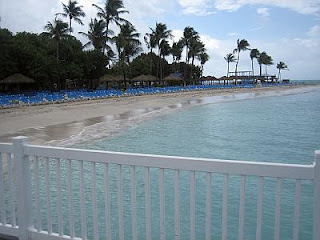 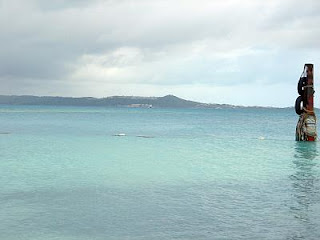 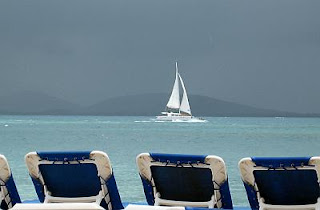 We saw lots of chickens (including a hen with chicks!), some roosters, and some iguanas. 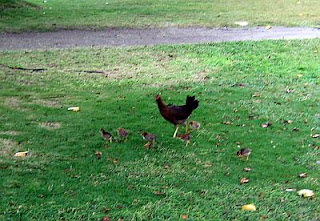 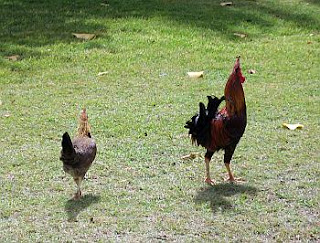 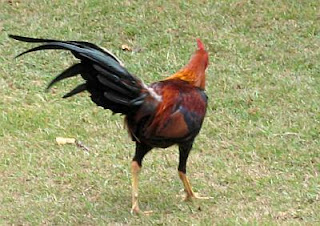 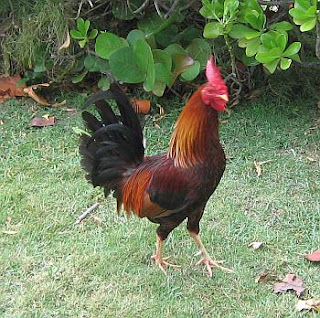 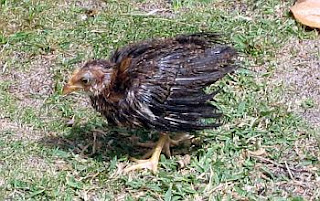 The roosters were, of course, ridiculously noisy!  Talk about strutting your stuff ...

The iguanas were busy basking in the sun.

This pictures makes me laugh - I call it "An iguana and a rooster walk into a bar ..." 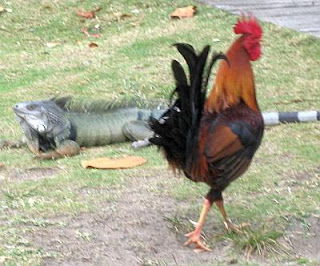 It was a beautiful day, even with a couple of quick rain showers, and we walked all around the island.  We were there from bright and early in the morning until about 1:00, when we headed back on the ferry and took a little break before going to the pool to hang out for a while.

We had a truly amazing dinner (I had vegetarian mofongo and a mojito), at a place called La Estacion, that used to be a gas station.  It was recommended to us by the man who was in charge of the horses, and it did not disappoint.  The Tim also had the mofongo, Pat had grilled red snapper, and Amanda had grilled lobster.  With various drinks of course.  All the food was declared yummy and amazing, and we all ate too much.  But it was worth it - we were on vacation, after all!

We also had an "adventure" involving a trip to a local K Mart because both The Tim and Pat needed belts (a ridiculous story no matter how you look at it), so by the time we got back to our rooms, it was kind of late, and we'd had a busy day.  So we had a nightcap in Pat and Amanda's room, and then we all turned in since the next day we had a bit of a drive to our next destination.

My cold was in full force, but since everything was so leisurely, it was OK.  I'm sure there were others around us though who wondered why someone who seemed to be hacking up her guts and blowing her nose a bazillion times was out of the hospital ... :-)

Suffice it to say that last Monday was a WHOLE LOT better than this Monday was!
Posted by Bridget at 6:33 PM
Labels: animals, cats, fajardo, food, palomino-island, puerto-rico, vacation

Your photos are wonderful (especially the iguana and rooster!) and it sounds like you had a terrific time. I did have to laugh at visiting K-Mart on vacation in PR, but since you were having a leisurely, relaxed time, why not?! Hopefully some good vacation glow can get you through the work week.

Even with a cold, your trip sounds divine. Love the caption for the rooster and iguana photo. ;o)

Looks like heaven! We used to have two huge iguanas when the kids were kids. They do NOT make good pets. They are very messy critters. Hopefully all that sunshine will chase those cold germs away soon.

What a beautiful place!

Oh, Bridget! That looks so FABULOUS! I'm so glad your vacation was relaxing and fun. Your photos are just gorgeous. The scenery? WOW!!! And I did have to chuckle about the iguana and the rooster. . . Thanks so much for sharing. I love traveling vicariously! :-)

That looks both tropical and relaxing, so...perfect for vacation! And of course you took pictures of a cat, roosters, and an iguana. But that photo of the water and beach chairs--heaven!

The resort looks dreamy! Tropical vacation with good family/friends and tasty food. I hope it fixed that cold up! I like the Rooster and Iguana walking into the bar, ha!

oh my the photos!! looks like a perfect destination and who cares if it only rains for a few minutes a day? that is not bad at all!