Queen of the Angels

May has arrived.  As happens every year, I am immediately taken back to my school years, particularly those in Catholic schools, where May was the Month of Mary.  As in Mary, the mother of Jesus, the Blessed Virgin, etc.  All through the month, there would be special programs to honor her. 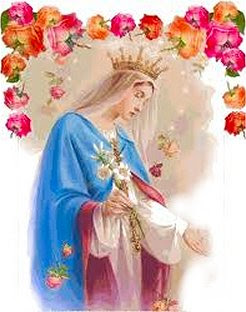 Two were my particular favorites:  May Devotions, and the May Procession.  For anyone who was a child in Catholic school at a certain period of time, these were a Big Deal.

May Devotions were not necessarily a thing at every parish, but at the ones where I grew up between 4th and 8th grades, they were.  They took place each weekday evening, usually at ~ 7 p.m.  If you had flowers available to you (even dandelions were acceptable), you would pick a few and head to church.  The usher would open the church doors, and you would file in an orderly fashion (well, for the kids at least, the adults did pretty much their own thing) into pews, and the service would start.  First up was my favorite part: the priest would enter the sanctuary, and come to the front of the altar rail with a basket.  Then everyone who had a flower would go up to the front of the church, and lay the flower in the basket, while everyone sang this hymn:

Our full hearts are swelling,
Our glad voices telling
The praise of the loveliest
Rose of the Vale.

(I still sing this in my head during the month of May. Also - the world "vale"!)

The basket of flowers would then be placed in front of the statue of Mary, given prominent place on the altar during May.  Then there would be a couple of prayers led by the priest, one of the litanies recited, and we would leave to the sounds of one of the other hymns about Mary.

Total time:  approximately 30 minutes.  I loved it - flowers, singing, not much time spent in church, no boring sermon, and the evening still young.

But the big deal of May - I mean BIG DEAL. in that we took time out of the school day to practice for it - was the May Procession.  It was generally held on Mother's Day (sappy but true), and was a major event when you usually got a new dress or maybe at least a new pair of shoes.  And the May Queen and Her Court would be named (probably by the nuns, I don't know.  It was usually a group of girls who seemed particularly holy).  The May Queen was either an 8th grader (elementary school) or a senior (high school), and she got to wear A GOWN, place a crown of amazingly pretty flowers on the head of the statue of Mary, and lead us in the Memorare:

Remember, O most gracious Virgin Mary, that never was it known that anyone who fled to thy protection, implored thy help, or sought thy intercession was left unaided. Inspired with this confidence, I fly unto thee, O Virgin of virgins, my Mother; to thee do I come; before thee I stand, sinful and sorrowful. O Mother of the Word Incarnate, despise not my petitions, but in thy mercy hear and answer me. Amen.

Amazing stuff, and such an honor to the be the May Queen!  The closest anyone in our family ever got was the time in high school when my sister Mary Ellen was on the May Queen's Court.  (She was *very* holy.  Now she is an atheist.)

The church would be packed to the gills for the May Procession, and the dramatic parts were worked into the regular Sunday Mass.  But oh the pageantry, the incense, and the "specialness" of the whole thing was just intoxicating as a kid.  Especially since it was one of the rare times when females were the focus of church events.

For better or for worse, this is all a thing of the past now.  I don't know of any churches that still have formal May Processions.  But every year I am reminded of the anticipation, the mystery, and the events that made May so special, even for a kid who was not necessarily ever very "holy."

On a slightly related note, I read this article yesterday, and found it quite interesting.  (And no, I'm not trying to turn anyone into a Catholic, or a believer.  It just so happens that this article is in a Jesuit publication.  What can I say, I have catholic tastes in reading!  (See what I did there?)

Do you have any special things that May brings to mind?
Posted by Bridget at 10:01 AM
Labels: Mary, May, May-Devotions, May-Procession, religion

My sister converted to Catholicism (for her second of four marriages!) so I ask her whenever I have questions about the religion. I can't believe she never mentioned May Devotions and the May Procession! I would have begged to convert if I had known about these as a child.

When I was in elementary school we actually had a Maypole. It was the flagpole with lots of crepe paper streamers attached to the top and we (girls only!) did this kind of skipping dance around it so the streamers got woven around the pole. My sister and I also left May baskets on people's doors, but that usually meant dandelions in baskets we made out of paper for my mother and aunt. Good times!

Bridget- I am such a lapsed Catholic, it's hysterical. And I saw what you did there.

I can see why these Big Deal Events captured your heart and spirit as a child. Such pageantry! My Presbyterian upbringing had nothing to compare. I had several Catholic childhood friends -- and they always seemed to be doing something Big and Mysterious. I was a bit envious at the time, because I was always one for a Big Deal Event as a child. Alas . . . I probably would have turned out like your sister. . .

I loved hearing about your customs and traditions. Life was sure different back in the day. My dad was Catholic but was raised in a boys home run by nuns back in the 30's. That was it for him. It turned him off religion forever. I was raised with none so it's like forbidden fruit. I've tried them all but none stuck. I have a deep respect for all of them and love hearing about the kinds of things you shared.

Thanks for sharing your memories and your culture. It's a lovely post. May always seems to fly by for me. For my son's childhood it has represented the very end of a school year. They get out the 25th this year!! I guess like the seasons it represents Transition I suppose.

Hmm, I wonder if that Is practiced in my community. I need to ask some of my Catholic friends. I love the idea of bringing flowers to the altar for Mary.

When I was in elementary school we had a May Day celebration. Each grade did some sort of "program". When I was in third grade we did a jump rope demonstration.

The sixth graders ALWAYS did a May Pole dance. I thought making a ribbon braid on the pole was darn-near MAGIC!

I loved the Month of May because we would take time out of our schedule to recite a decade of the Rosary. I do not recall processions but I do remember Masses with fragrant flowers and opened window in the church for weekly Mass.

Wow. I was raised Catholic but never, ever heard of all of that. May was always the Month Of Mary, but our church never went through such a thing.

I was quite the devout little Catholic for a while, but about 30 years ago had to Just Say Goodbye. Probably the place would burst into flames if I showed up.