Gardening When You Are Not a Gardener

I know I've written here before about our garden, and fixing it up, etc.  Of course, it's an ongoing process, but after finally getting into shape last summer, it's been a lot easier this summer to keep it looking nice, and we've even been spending time out there during the evenings on days when it hasn't been too hot and humid.

When we first moved in, the garden had all kinds of amazing plantings.  Over the years, between us not having a clue, the installation of a new roof where they just threw stuff into the garden from the roof, killing quite a few things, and street work, a lot of the smaller things have died off.  I *love* plants and flowers, but a) know nothing really about most of them, and b) have the love but not the dedication to grow elaborate gardens and keep them going.

Having said that, I do like to have *some* plants and flowers out there, and in the front planter on the one front of our house (we have two fronts, it's another story altogether).  In the front planter, it's not worth planting anything too nice, as the few times we've done that, we've found them dug up for someone else's garden, or in the case of some tulips, dug up for what we decided must have been a Mother's Day gift ... so the front planter generally has plants that are inexpensive and not terribly desirable to dig up.  This year, I planted rosemary and lavender right outside the door a few weeks go, and then today, added some impatiens and zinnias. 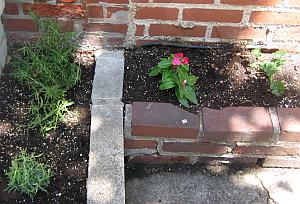 (The little plant to the right of the impatiens is a plant that is supposed to spread and flower, and I've completely forgotten the name ... ) 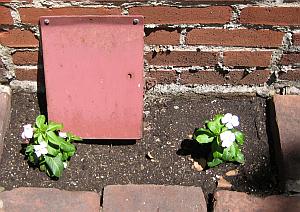 (Note: this vent is inactive, it's just in the way.) 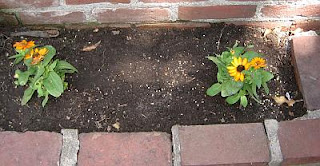 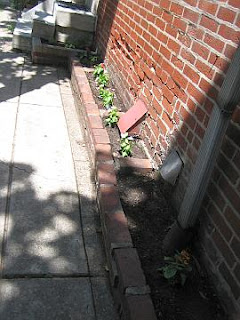 I am pleased, even though there aren't many plants, and some will surely not make it.  Next spring, we want to try and add two rosebushes to replace the ones that were extremely old and spindly that we removed.

Inside the actual garden, which is enclosed next to the house, I tried some perennnials, in the hopes that maybe at least one would "take" and come back next year.  If they do not (and realistically, they may well not thrive), they were all on sale, so it's not like I've invested tons of money in flowers.

I tried a butterfly bush (shown here after being watered, so it's looking droopier than it did when I planted it: 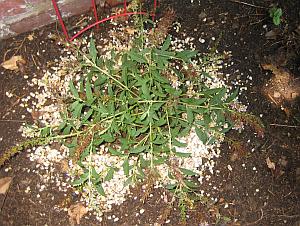 A coreopsis plant in another spot: 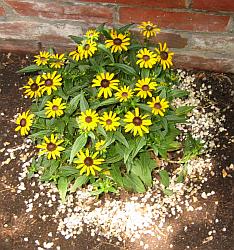 And finally, a dianthus plant (top in photo) along with the last of the zinnias in the grouping I bought: 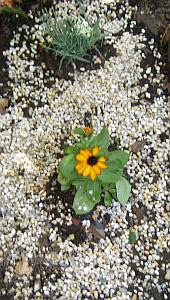 So we'll see what happens.  For now, everything looks pretty, and happy, and maybe I'll be lucky this year and more will live than die.  I also have an azalea to plant, but I need The Tim to help dig the hole.  We had a lovely azalea when we moved in, but it was taken out when some plumbing had to be done, so hopefully that will do well once it's in the ground.

Of course this morning while I was doing all of this, I had a lot of help. 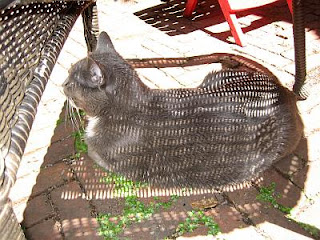 Jetsam snooper-vised from under a chair, where he could appear both regal and patterned. 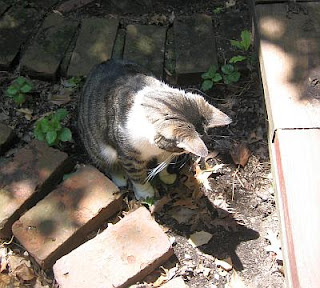 While Jack was extremely busy with a bumblebee that was in the dirt and then later, between the bricks.  I think it was near the end of its bumblebee life, because it wasn't flying at all.  But it did keep him busy, which was fine with me!

The garden is a happy, enjoyable space now, and I'm glad I spent all of that time last year really working hard on it.  It's nice to have a private space in the middle of the city.  :-)
Posted by Bridget at 3:47 PM
Labels: cats, flowers, garden

Your plantings will thrive and hopefully, will spread. My house had a lot of plants when I moved here. I loved the shasta daisies but did not like the hordes of grasshoppers that they attracted. Now, I'm limited to having five large pots of geraniums on the front porch. They are easy care and don't break the bank to replace every year.

Jetsam is so funny with his shadowy fur! I hope he kept you on task while you were outside!

We have tried having plants on the balcony to give it a more "homey" look. Unfortunately, EVERYTHING has up and died. I think the concrete just radiates more heat than the poor plants could stand.

I wish I could garden but my RA makes me grumpy when I do, so I rely on my husband and he is limited in his interest. We like perennials because they keep coming back unless the rabbits eat them up. Right now we are trying to get rid of lemon balm which has taken over the one garden and choked out lots of pretty perennials...ugh.

It's so nice to see newly planted gardens so tidy. Mine go to weeds quickly in this heat. The deer are also devouring my hostas at the rate of one a night. Why can't they just eat the weeds?

We finally got the herb garden in (or, Rick did), just in time to leave it for a few days. Sigh. I'm hoping Sam will remember to water it when he stops by the house for his lunch hour.

Or, maybe we'll get EVEN MORE RAIN.

How can your garden fail when you had so much Expert Help?

I think you get to call yourself a gardener after working on your garden space and planting these lovely, cheery flowers! It always surprises me how people feel free to "enjoy" flowers someone else has planted and taken care of. We have some rose bushes along the sidewalk and the blooms are almost always pruned by passers-by!

I am a terrible gardener, so I applaud your efforts! It will pay off to have such a lovely space in the city.

Your garden shows fantastic signs of promise! I especially love your garden assistants!

What a delightful garden space! Plenty of water, a bit of fertilizer now and then, and some deadheading will keep those flowers looking great. Flowers among bricks are just so charming! And with your garden help? Well . . . you've got it made! :-)

Looks great to me! Hope your butterfly bush survives; they attract hummers, I think. Happy Fourth!

I like that you have an "enclosed" garden next to the house. That has got to be nice! Everything looks so nice (probably because you were being supervised!!). Our gardens are looking like jungles now. So many weeds have taken over...

Well, well, well. I haven't been by for a while it seems and now the site is all dressed up! Love the new header. Calming.

Well I love how things are coming along in your garden. I would be more useless than the cats in the garden, but I would probably plop down next to them to enjoy that lovely spot of sunshine. Cute. Enjoy!!