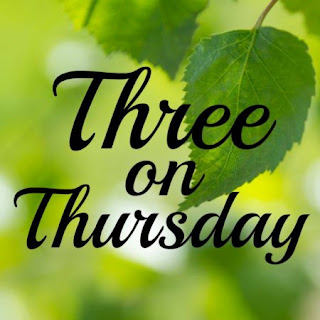 Yes, I know I just posted yesterday, but I'm on a roll here, so work with me.  Today is Three on Thursday, and I have my List of Three ready for you.

I don't know if any of you become obsessed with random things, but I sure do.  Daily. Hourly.  Some stick around, and some disappear as soon as I see cake or shiny things.  Here are three current things.

1.  This one has stuck around for a week so far.  I saw a Chinese Money Plant on Claudia's blog the other day, and now I long to have one.  I love house plants, and have always at a minimum had a bunch of African violets.  That is, until the Koodle joined the family.  He didn't eat them, just enjoyed knocking them off the plant stand enough times they just gave up and died.  So then I bought some succulents, since they didn't require being *right* in the sunshine all of the time.  Well, apparently our house has bad plant juju now, period, because they were almost immediately dead.  Even after I had been guaranteed that it was nearly impossible to kill them.  Anyway, apparently the  aforementioned plant is hard to find, and are then expensive when you do find it, so I guess it's just as well.

The Koodle is why we can't have nice things.  Sigh.

2.  Hot apple cider.  I like cold apple cider, but I LOVE hot apple cider with cinnamon.  However, cider buying is tricky in our house.  We don't drink the big jugs fast enough before they spoil, and the small jugs are maybe only two hot mugs' worth, and are therefore gone almost immediately.  Plus, even though it was wonderfully fall the past couple of days, it's supposed to be warm again for the next few, and I don't like hot apple cider when it's warm because FOR GOD'S SAKE IT'S A COLD WEATHER DRINK AND IT'S SUPPOSED TO BE FALL.

3.  Halloween decorations.  We have some, but won't be putting 99% of them out this year and as a result, I want all of them that I see!  Right now, our house is still in It-Looks-Like-We're-Moving-But-We're-Not mode as a result of one of The Tim's many projects.  There is not currently anywhere to put out the decorations we do have, and to be perfectly honest, I can't even find where they currently are in order to pull out even a few.  We do have a pumpkin, and I bought a new little wooden decoration the other day at Target, but this year will be, for the most part, a non-decor holiday for us.  And I'm not going to say anything to The Tim about any of  his projects, because he always keeps his mouth shut about mine, bless him.  But it sure is frustrating nonetheless!

What are you obsessed with these days?  Surely there's something, right???
Posted by Bridget at 9:09 AM
Labels: three-on-thursday

Bridget- If I'm not mistaken, I have seen one of those plants at Costco. Does Philiadelphia have a Chinatown?

What am I obsessed with? Good question. Do getting a handle on managing my time and clutter count?

On cider.... When I was a kid, and we went to the fair, Dad and I always got a cup of hot apple cider. It was the end of September - it was always cool out - perfect hot cider weather.
This year when I finally went back, I was determined to continue the tradition. Only it was sweltering - hot, muggy, face-meltingly hot. I still got a cup of cider, but it was cold.

On obsessions... fabric - definitely fabric. I have more than enough yarn in my stash, so now I'm working on my quilting stash. I check out an online store almost every day... and mom and I have plans to hit up a fabric store in a town an hour away next week. I don;t know when I'll find time to make all these quilts... but I can sure obsess about having fabric for them.

Well, I am ashamed to say my latest obsession is my giant bowl of Halloween candy. I can't pass it up without taking some. There won't be any left by Halloween. For the record, I didn't buy it. The Mister thought he was doing me a favor and picked up a zillion bags even though we haven't had a trick or treater in years. Now I am on a chocolate high all day long. I just can't get enough.

I saw that plant on Claudia's blog too and fell in love with it. Will let you know if I come across any.

Obsessions: oh, so many, 1) getting thru the work week without being nasty to anyone - difficult at best, but I'm trying; jelly belly - not good for me; black licorice - see above; wanting some new fall shoes/boots (don't need...just want).

Would a half-gallon size work? I think the two-cup size is a quart, so a half gallon might give you four?

Maybe instant cider? I've had some, and found it perfectly fine. Unhelpfully, I cannot remember the brand name.

Apparently I am obsessed about YARN! LOL

when the kids were here they drank hot apple cider daily. I guess I'm not into it but it was fun having the house smell fall ish!! My obsessions are watching fall change daily on my walks :) Love this time of year.

My sister is an enabler with her plant, pottery and everything else she likes obsessions. I have weaned through decorations but still have many up so it is festive for Little B.

Get the big jug. Put 1/2 in the freezer. I like it slushy too! You can use a gallon ziplock bag. Freeze flat. Doesn't take up much space that way and thaws quick.