This year has involved a lot of knitting on my part, but as for finishing ... well ...

In my defense, some are bigger projects, and some are long-term (Cozy Squares of Memory Blanket) - but finishing a pair of socks?  That shouldn't have taken long at all, and yet it did.  But they are finally finished as of a week ago and here they are. 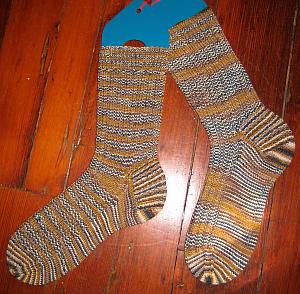 Project:  Basic Spats
Pattern:  Classic Socks for the Family, by Melinda Goodfellow
Yarn:  Lorna's Laces Shepherd Sock, in the Spats colorway
Needles:  Size 1 US
Modifications:  None
Notes:  I've had this yarn in my stash for a couple of years, and decided that I would use it for the first project of 2018, to make a pair of socks for The Tim (I bought it with him in mind).  I started out using the Blueberry Waffle pattern, but when I got to working the heel gusset (yes, more than halfway through), I realized that the leg would look too different from the foot to suit me (I had planned to just do plain stockinette on the foot).  So I frogged back, and decided to just go with the plain rib.  In the end I'm glad I did because I like the way they turned out.  But it took me a while to then finish them because basically by the end I had knitted 2 1/2 of the same sock, and I was tired of it!  But when I realized that it was nearly the middle of February, and I was still working on my first pair for the year, I pushed to get them finished.

Here's an "artistic" shot for you to enjoy. 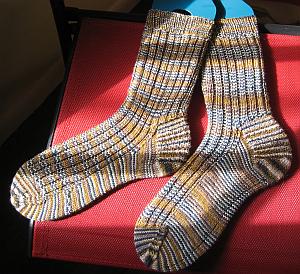 I'm already well into my second pair of socks for the year, a pair for me, and so far, so good.  I could possibly finish them during February, but I've also told myself since March is a long month, it's OK if I finish them in early March because then I would still have time for a pair for that month.

Well done! The Box o' Socks should be personalized because a sock is a sock no matter what kind of yarn you use.

Your socks look lovely. I always thing I'll have socks done in no time, and I almost never do!

These socks turned out great! Sock knitting is so much fun as I have two different pairs I'm working on at the moment. I hope you have warmer temps this coming week. My best to you, Pat xx

I love them!!! That colorway is awesome with that pattern.

You are the boss of your Box o' Socks and this is a great pair!

Those look great Bridget - love the way the heal flaps look - very, very pretty...well, handsome since they are for The Tim. Congratulations on another great finish!!

Great finish Bridget. I LOVE how the heels aligned. You know Im all about socks right now! in fact, I'll pick them up again in an hour. I have had lots of weary winter time and olympic viewing time to knit. I'm glad for the craft. And for my blog craft pals!! I am a huge Lorna's laces fan

I love them! Sigh. I wish I would actually finish a project!