But it was a good one, nonetheless.  First of all, it was the weekend.  Saturday when I woke up, I didn't really feel that great - sniffles, headache, joint aches, you get the picture.  So after I took Hamlet for his walk, I went back to bed for about 2 hours, which actually helped.  Then once I took my shower I felt even better.  I don't know if that indicated that a cold was on the way, or it it was just being tired, but fortunately it didn't seem to stick around the whole weekend.

So Saturday consisted of a lot of just doing small things in between taking lots of breaks.  I finished a book I'd started on Friday (it was a quick, cozy mystery, so it went pretty quickly), watched a couple of knitting podcasts, and worked for a little bit on my Neverender sweater.  (Which is what most of you know as the Weekender pattern by Andrea Mowry.  I think I'll like the finished piece, but even before I broke my wrist, it seemed to take FOREVER to knit.  Anyway.)  The Tim had to work, so I just enjoyed an unexpected day to myself.

Sunday, I decided (for the second week in a row) that it would be Scrappy Sunday.  This is apparently a thing others know about, but I only became aware of it after watching one of the episodes of the Crazy Sock Lady.  She mentioned that on Sundays, she tries to work only on scrappy projects, so they get some regular attention.  I decided that was a really good idea, and I was going to give it a try.  So last Sunday I managed a square on my Cozy Squares of Memory Blanket (it's the one on the top right in the photo below).  Then yesterday, I completed the square shown in progress in the photo below, plus one more. 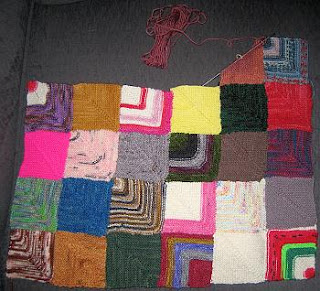 I enjoy this idea, since prior to this, I'd only added a square or two after I'd finished a project.  This way I can visit it more often, and feel like I've accomplished something, even if it's just a couple of squares.

Other than that, I tried a recipe that was a sort of fake spanakopita, and it was a) very easy, and b) really, really good!  So that will definitely stay in the group of things we have regularly. It's always nice to find a new thing to fix for dinner that doesn't take hours to assemble.  Then we watched some shows we'd recorded, and waited for the snowstorm which was supposed to be HUGE but at least in the city, just meant dampness and wet streets this a.m.  I know that they got a lot of actual snow in the burbs and other outer areas, but it was a bust for us.

So even though the weekend seemed to go by too quickly, it was a good one, and I got to do some knitting.  I'll take it.  :-)
Posted by Bridget at 8:39 AM
Labels: cooking, knitting, weekends

What a great idea to work on "scrappy" projects on Sundays. I bet you'll notice a lot quicker progress on your blanket, with focused time on Sundays. (Of course, that means the Neverender - love that - will live up to its name even more. . . ) Sounds like a good weekend, Bridget. And I'm so glad you didn't end up with a longer-term sickness of some sort. XO

I have certain times that I work on certain projects and that works for me. Mostly it centers around when The Mister is occupied elsewhere. He's a HUGE distraction. Lol.........

I'm working on my scrappy mitred blanket, too, after setting it aside for gift and charity knits. Glad you're feeling better! I think we're all waiting for Airing Out weather so we can stop stewing in our own germs.

Glad your "cold" didn't turn into much.

We got quite a bit out here in Central Bucks, but the roads are clear.

Like your blanket Bridget. I should dig mine out and work on it some....

We did get more snow than you (2 hour delay for me this a.m. at work), my back roads were closed (assuming trees/wires down), but otherwise the roads are fine.

I would like to try Fake and Easy Spanakopita if you feel like sharing/linking the recipe. We must have been in that purple band of 7"+ on the weather map because we did get a "medium-huge" amount of snow, but nothing here in MD. Good thing, I didn't want to shovel again.

I love the Scrappy Sunday idea! And, your blanket is looking lovely! I have started a bit of a scrappy blanket - but mine is still small and at the very portable stage!

how exciting to see knitting on your blog :) Lovely blanket and may your Sundays all be scrappy and happy!!

I'm glad you're feeling better and knitting to boot! I love the concept of a Scrappy Sunday!