Seven years ago today, a feral cat had a litter of kittens in South Philly.  The feral cat was lucky, because she was in the backyard of a friend of ours, who had created a shelter for feral cats and fed them.  Once the kittens were weaned, she was able to find homes for all but one kitten, as well as take the mom to be spayed.  We had recently adopted Dug the Doodle Dog, and I told The Tim that we should adopt the kitten because Dug needed a kitten.  After a few weeks of reminding him of this, and some agreement from the friend, that kitten (aka The Koodle) joined our family.


He was so little! 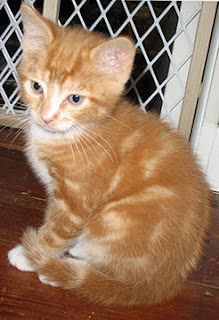 By the end of the same evening that he arrived in May of that year, he and Dug were inseparable, causing The Tim to say, "I guess Dug did need a kitten."

Of course, his real name is Milo, and he has been a real character for sure!  He and the other cats have always been friends, but when Hamlet joined the family last summer, you could tell it made him really happy.  They are such pals, even though Hamlet is still figuring out the whole cat thing in general.

He embodies the adage, "When he was good, he was very very good - but when he was bad, he was horrid."

We hope you'll be around to drive us insane for many more years.

Such a handsome kitty all grown up!

The same thing happened to me about 9 years ago but I kept the mom and all the kittens. When the foster lady showed up to take my "babies" I completely freaked out. 5 cats all at once. It's been an adventure.

Happy birthday, Milo! You certainly landed yourself in a wonderful home. XOXO

Every dog needs a kitten! Jem and Winnie get along famously!
Milo is a real beauty! I do love a good ginger!

I love a sweet Kitten Story! And you know I love the Orange Marmies best of all.

Great save story!! RED cats are so fun!

Wow! Milo looks like a reincarnation of my cat, Dudley. Dudley has been gone for 25+ years but wow! They could be twins! Happy Birthday Milo!

what a lovely adoption story and happy birthday Milo!!

Happy Birthday Milo and many, many more years of happy insanity to your family!