Meditations on the Last Monday in April

I just returned from a dr appt to have my wrist x-rayed for the eleventy-thousandth time, and I got a good report, but of course was instructed to keep working on my exercises.  Occupational therapy is finished, but the rest of it will be up to me.  I have a lot of determination to get back to as close as 100% as possible by the time I go back in November.  The dr said there is a good chance that I may never be 100% in all aspects of movement in my right hand and wrist, but I'm gonna try to do the best that I can.

Anyway, the weekend has moved on, and April is getting ready to exit.  Our weekend was quiet, which was fine, since last weekend was so busy.  Yesterday, I returned to my Scrappy Sunday - using Sundays to work on scrappy projects, in my case, finishing another row on my Cozy Memories blanket. 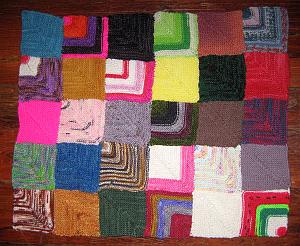 I added the final three blocks on the left to the top row.  I've really enjoyed Scrappy Sundays, even though this is only the second one for me.  But I like picking up this project every week and remembering everything included in it.

So there I was, happily knitting away on the blocks, and then I heard the news about the shooting at a synagogue in California.  And I thought about how I was sitting with my project, thinking about projects and people associated with the various blocks.  A few of the blocks are from mini skeins and leftovers given to me by friends.

And whenever I am knitting, I remember how the watermelon block on the bottom left is from a pair of socks I knit a few years back.  I was working on them while we were in West Virginia for Memorial Day, and my niece Annie was so incredibly fascinated.  She kept saying, "But ... how does the yarn do that, how did they know to make it that way?"  The first block of the blanket, on the bottom left, is from Dee, who gave it to me when we went to see her and Steve at Christmastime the first year they moved back to Pennsylvania.  She handed it to me and said, "This is to get you started."  In the second row, the blue square that is the second one on the left, is made with a colorway called Unity, a sock yarn dyed in 2008 by my friend Carol, who sent the proceeds from it to the Obama Presidential campaign.

This was my meditation from yesterday.  I was in my own house, and feeling safe, because hopefully everyone does feel safe in their own house.  And I realized that the California synagogue (and months ago, the one in Pittsburgh) were houses of God, where those gathered felt confident and safe, and were thinking of loved ones near and far, those who were gone in body but not in spirit.  They were meditating on the meaning of Passover this year, and celebrating the end of the holiday.

That is, until a 19-year-old nursing student (a *nursing* student - a caring profession if there ever was one!) decided that it was up to him to get rid of them.  And of course he had a gun to do it.  Because the only thing these days more available than thoughts and prayers are guns.

His actions didn't just kill a person, or injure others.  It took away their sense of safety in what should be one of the most universally safe places - a house of worship.

But his actions also served to make all of us wonder how safe we are once again.  We think if we're home, we're safe.  We think if we are at school, or church, or a work meeting that nothing terrible will happen to us.  When it turns out that we just aren't really safe anywhere.

Maybe we never have been.  Maybe finally something will be done about guns in our culture.  Maybe someday we will have a leader and an administration that does not provide us with Exhibits A-Z in the story and action of hate and vindictiveness.  Maybe.  I don't know.

I just know that we need to live our lives and help others when/if we are able to do so.  We need to vote and be active in our neighborhoods and communities.  We need to share our opinions and feelings with each other without it turning into a free-for-all.

Yesterday, I took Hamlet for a walk, and we stopped to visit with a neighbor on our street.  She asked me if he ever growled at the cats, or at dogs who lunged at him or growled at him on a walk.  I told her that he never does.  And that it seems if the cats are bothering him too muh, he just gets up and walks away.  She said, "If only people did that."

Thinking about it, I had to wonder: people say animals are "just animals," or "dumb animals."  But what if humans are the dumb ones?

Here's to a better week ahead.
Posted by Bridget at 10:57 AM
Labels: guns, Hamlet, knitting, meditations, my-opinions, wips

It was awful awful news. My heart ached for the Jewish community everywhere. Horrible the it was a nursing student (I'm a nurse) and horrible on every single level.
ON another note, I love your blanket work

I so agree with you .... we should be more like Hamlet.

I don't understand why we can't disagree anymore without being disagreeable. For me it means conversations usually don't get beyond "small talk". I miss having civil discussion that goes beyond the weather today.

From your mouth to Congress', the administration's, and NRA's ears. I would like to think and hope that attitudes towards gun violence could actually change, but I honestly lost that hope after Sandy Hook. Humans are the dumb ones, and there is plenty of stupidity and ignorance to go around also.

We are. There's no question.

If it were not for the guns, these things simply would not happen.

If the poor dead children of Sandy Hook were not enough, nothing will ever be enough. It's obvious that this is what our country is. I am sick and sad that we are just not better than this.

Humans are definitely the dumb ones.
Maybe Hamlet should run for president... :D

Amen to everything you said. I had my Jehovah Witness ladies show up at my door today and even they say they lock the doors now at every meeting. What a sad world we live in.

Smart dog, dumb people with guns. Really we need to curb the NRA. No one needs a gun, or perhaps I could live with 'no one needs more than ONE single, non-automatic gun'.

I just have no words, Bridget.
Thank you, though, for sharing your wise words today.
XO