Today is Wednesday, which actually is my Friday, because I am taking tomorrow and Friday off, and will therefore have an extra long weekend - YAY!  And, I was puzzled about the date, so when I realized my two days off were this week, that made it even better.
On my way to work this morning, I snapped some photos.  Granted, they are not the best, but the sky looked so moody, I couldn't resist.  It was so windy I had a hard time standing still, but I did my best.
I have several different routes I take to walk to work.  Some are based on practicality - i.e., the non-gingko route - and others are based on things like having to mail something, wanting to stop somewhere, etc.  This morning's route was just to walk on one of my other routes for the heck of it.  This first photo is about 3 blocks from our house. 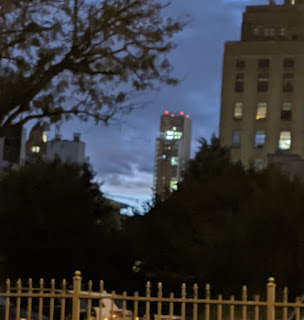 The building on the right used to be a hospital (Graduate Hospital), but now it's condos.  The building with the lights in the sort of middle is a new-ish high rise on Broad Street (the north to south main street in Philadelphia).
When I turned the corner, I saw this: 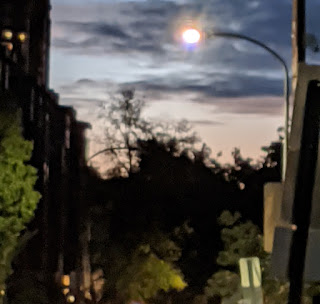 I just love how the sky looks in these photos - right as the sun is getting ready to show up for the day.
People in our neighborhood do a lot of decorating for Halloween.  There's one house that is the place every stops to look, take a photo, etc.  But that house is currently under renovation, inside and out, which is somewhat disappointing.  However, about a block before the above photos, there is a row of new houses, and the one on the corner is stepping up to fill the void: 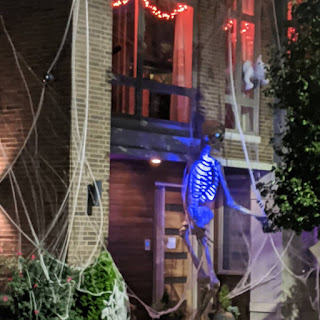 And trust me, this is only a very small slice of their decorations!  You can't really see it well in this photo, but near the upper right, there is a ghost who looks like he crashed out of the window.  This particular decoration has intrigued me for years.  When you see it full on, it looks like the ghost did in fact break the window, and half is outside while the other half is inside.  I would like to know how it works, because it's creepily realistic.
And finally, a "funny" to share with you, also from my walk to work this morning.  I was walking a bit behind a man in a business suit, carrying a briefcase.  At one corner, he walked over to a man who was standing, and it was clear he gave him some money.  And he continued walking.  As I passed the man who received the money, he said to me, "Did you see that?" and I said I had, and then the guy said, "I'm just waiting for the bus, and that dude gave me five dollars!"  The business suit guy thought the other man was homeless; and even when he talked to me, it was clear he was still processing what happened, and frankly, I can't imagine anything will amuse me as much for the rest of the day.  All I can think of is that the business suit guy feels good because he thinks he helped someone by doing a good deed, the guy who got the five dollars has that much extra money and a good story to tell, and I am able to keep remembering it all day to get a good laugh.
Even if the rest of the day sucks, it started out well.  😊
Posted by Bridget at 8:16 AM
Labels: halloween, holidays, moody-skies, neighborhood

We have one of those popping ghosts in my neighborhood, too. Very clever.

Love that moody sky. Ours has been unrelentingly cloudy and rainy. Today may be our first dry day in ages. Fingers crossed!

I'd love to see that window popping skelly. Skeletons are VERY popular this year.

I envy your walk to work. My daily ride around the Capital Beltway for 20 years was no fun.

Wow! a lot of interest on your morning walk! Enjoy the long weekend!