To use one of my  mother's favorite expressions: "Oh for God's sake!"

This past weekend, The Tim and I had been catching up on some TV shows, and we were at a stopping point.  He headed downstairs to organize things for the dinner he was planning to cook, and I went to get ready to take Hamlet for a walk.  Walking Hammy is a routine activity that is no real effort (unless he sees someone that he recognizes always has a treat for him!).

It was a nice day, and we were walking along, and I happened to look down. 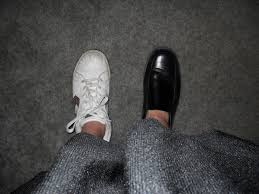 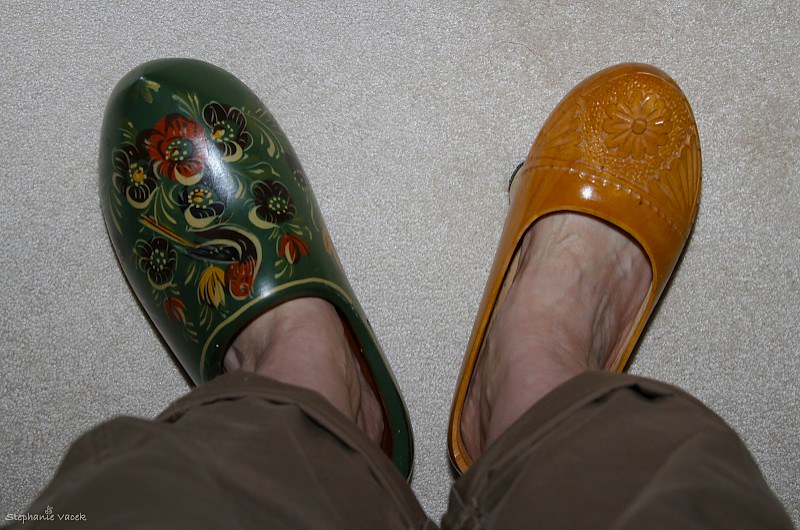 Now, neither of the images above are photos my own feet, but they do depict the situation:  I'd left the house wearing two different shoes!
Around the house I generally wear a pair of crappy, nearly worn-out pair of shoes.  We don't go barefoot in our house, because we have old wood floors and they are cold in the winter, and potentially splinter-y all year round.  When I leave the house with the dog, I take off the crappy shoes and put on an old pair of beat up waterproof flats - with the premise that it doesn't really matter what happens, what they get on them, etc.
Apparently, I had been interrupted by: a) a brilliant thought?, b) the idea of pie?, or maybe even c) a change in air direction in the universe?  I mean, really who knows, but clearly during the change of footwear, I'd been interrupted and only changed one shoe.
Now some people might be mortified by this, and I might have been if it was a different situation - you know, like showing up at work with two different shoes, or at some formal event, or - well you get the idea. But I was walking the dog, I was in our neighborhood, and in the grand scheme of things, probably no one we passed was paying any attention.  And Hamlet didn't care!
Instead, I found it so incredibly funny, that I started to laugh, and laughed so hard that I was crying by the time we got home again.  The Tim asked what was so funny, and I told him to look at my feet.  He was amused, and just shook his head.  Whereas, I found my approaching decrepitude really funny.
(Especially since it was the second time it's happened in a couple of months ... )
Posted by Bridget at 8:59 AM
Labels: funny, Hamlet-the-dog, my-mom, ridiculousness

Maybe you could start a new world-wide trend .........mis-matched EVERYTHING!

Can I say that I'm kind of upset that you don't own those colourful clogs?

I can't say I've ever left the house with two different shoes. I have left with my slippers on (they have hard soles, so they feel like shoes), and I frequently leave the house with clothing on inside out (usually my underwear, so that really doesn't matter - but several times it's been my cardigan)

I have brown and black Crocs that I wear when I go out and don't want clown feet. I can't tell you how many times I've gone out in one black and one brown.

So . . . Tom does this rather frequently. Altogether too frequently, actually. He is very smart. Very. Smart. He always has a LOT going on in his brain. But he is not always very observant when it comes to . . . daily living. (Plus, he's color blind.) I have learned to check his shoes before he leaves the house. I also need to make sure he hasn't put his clothes on backward. He just . . . doesn't notice. :-)

I've done it!!! with socks many times too1

my husband once went to work with two different dress shoes on, one black and one dark brown and he said it was my fault because I didn't check him before he went out the door....um...okay.

Lean into it. Start a trend, like mismatched socks. I'll be your agent for the Southeast if you do decide on that.

It was the last day of school and later that evening the teachers were to have their last dinner together for that school year. Finished with time to go home and relax, so I did by taking off my shoes and putting on a pair of comfy house slippers. Later we hurried out the door and I did not look at my feet again until in the middle of dinner when I noticed I still had my house slippers on. I guess summer break had officially started. lol

I also put a shirt on inside out one time. I had put a sweater over it and when my classroom got warmer as the day went on, I took the sweater off. Instant silence in the hs classroom. "What?" One brave student raised their hand and told me my shirt was inside out. "Is my face as red as my shirt?" I asked.
Took a quick break to the bathroom across the hall and got my shirt on right side out.
I'll blame it on how dark it got there when I was getting dressed, and probably my hurry.