Llamas, Alpacas, and Rabbits, Oh My!

Yesterday I took the Rosie's bus to the Maryland Sheep & Wool Festival. This was my third time attending, and the second time taking the bus. The trip was uneventful, except when we were very nearly at the turnoff to the road for the fairgrounds, and an a-hole in a car suddenly cut in front of the bus. Fortunately, the bus driver was a) paying attention, and b) a good driver. We suddenly veered off onto the median (which had a dip in the middle, where I was sure I would end up), but he managed to turn back onto the road immediately, and we continued on our merry way. There was someone towards the back who was apparently in the aisle and fell, but from all reports, she was OK.

It was beautiful and sunny when we left Philadelphia, and then when we got to Maryland, it alternated between sunny and overcast. (As long as it was neither raining nor 80 degrees, I was happy.) We arrived about 10:15, and it was already crowded. Which shouldn't have surprised me, but it did ...

I had no real plan for anything I wanted to buy, even though I had thought about making a note of places I especially wanted to stop. But I never got around to it. I did hope to find a product I had seen last year, and obsessed over the entire time since. Of course I had failed to note the name of the vendor, and no one I described it to remembered seeing anything resembling it. A Google search was no help. So I was pleased, when very near the end of the day, I came across the very item. I knew I had not made it up!

Anyway, I enjoy the festival as much for the animals as the yarny stuff. Fortunately, none of the animals I approached bit me, as they did Carol, according her post today. There were of course all kinds of sheep, most of whom seemed to have a lot to say! I love seeing all of the different breeds, and talking to their people about them. There was a pair of llamas who, according to their owner, were usually quite sociable, but had just gotten tired being poked and petted, so it was necessary to admire them from afar.

These guys had just gotten haircuts, and to be honest, seemed kinda surprised about it.

The one on the right looked like one of those new hybrid breeds of dog - could it be an alpacadoodle?? They were both pretty friendly, and needless to say, very soft.

These two apparently saw no reason to get up:

But they were sweet anyway. You can't really see it in this photo, but the lighter colored one sorta had a dreadlocks thing going on.

This pretty girl was incredibly soft and sweet, and was having a good hair day: 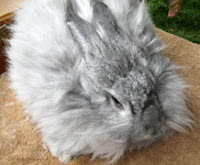 She sat there very calmly, while people came by, petting her and taking pictures, and while children poked her nose and pulled her ears. (I, on the other hand, was getting testy ...)

There were also some goats, but I didn't get any pictures since it was hard to photograph any of the animals if they were in enclosed cages. I also saw a rabbit about twice the size of this one, in a cage at another booth, whose name was Bridgette. She did not seem to be pleased. If you can imagine someone with such a lovely name being in such a mood.

Did I buy anything? Yes, as a matter of fact, I did. Here is a picture of a jacket I bought, modeled by the Molly hanger.

I didn't plan to buy a jacket, but I really liked this one. First of all, it is green and blue, which are two of my favorite colors. And when I tried it on, not only did it fit perfectly, but the sleeves were actually the right length - and that never happens!

I also bought these: 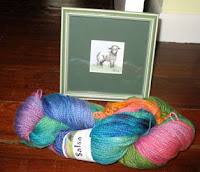 The little print is an ink drawing of a lamb, with a light blue wash over it. I am going to put it on a stand I have, in my bookcase that holds my knitting books. The yarn is from Dancing Leaf Farm. I bought some of their yarn at Stitches East, and loved the colors, so I was happy to see them at Maryland Sheep and Wool.

The little sheep I just liked, and decided to buy, to be sort of mascots for my knitting. This is the closest I will ever come to owning sheep, anyway ... they were very popular with the cats.

I also brought home T-shirts for Tim and Sebastian. At one point the line didn't look too long, and I figured that Tim deserved a T-shirt, because he never says anything about how much yarn I have, and will even encourage me to buy more yarn or books. I got Sebastian a T-shirt, well, because he's Sebastian!

I had hoped to meet BarbP, but we missed each other, which was very disappointing. I did meet Ann and Liz, of Crossroads Knits, which was fun. They are both very nice, and really funny. I enjoyed meeting them in person, since I read their blog on a pretty regular basis.

I'm glad I had the chance to go, though I was more than happy to get home. It was a long day, but a good one. I'm especially glad that I could spend today recovering!

We went to Dancing Leaf just the other weekend. I didn't end up getting anything though because the yarns I really liked they didn't have enough of & then I wandered around trying to figure out something I could buy & then just got overwhelmed & left. They had some nice stuff though. :)

Steph's comment above reminds me pf "exactly how I feel about the LYS"!

Thanks for blogging about it. At least you did not get bit fingers. I love the jacket!

Those Llamas look great! Very similar to Alpacas aren't they?

Almost like being there -- I'm glad you got the jacket. It's wonderful - I really like the little sheep, too.

(Did you pet the bunny?)

It was good to see you! Wow-- that's a great jacket. Glad you got it!

OK, so it seems I missed months of reading here! I am in a fog. That's quite a nice haul of goodies there girl! Yay for you! Alpacadoodle ~snort~

I enjoyed reading about your trip to "The Festival". You made a nice haul too. Love the jacket and the yarn, those colors are spectacular.

Sounds like it was a long day for all the animals. Glad you had fun.

I'm way behind on you too. Stupid tax season.

The fair sounds like it was fun! And luckily you found your "object". (The spinning machine thingie.) Those sheep look cute!

Someone put Jetsam in a pet container box and in the trash? Good God. People are freaks. But happy Belated Adopted Birthday, Jetsam!

Hey. Mysteries are excellent, and I'm pretty much the same way you are on figuring out who it is. I don't know where the idea that all reading had to be some intellectual exercise came from