Hooray! It's a long weekend - at least for those of us in the U.S., since Monday is Memorial Day. My weekend actually started today. I took the day off because I had a doctor's appointment this a.m., and figured what the heck, I might as well just head home afterwards. I turns out that it was a good idea, since the doctor's office was very short-staffed today, and I was there for quite a while.

Among other things, I decided to wind the yarn to make socks for my Sockapalooza pal, and actually start them. Here's an "in process" photo, showing the yarn, the swift I received as a birthday present, and the ball winder. I really love the yarn - I received it in a previous swap, from Sarah, who had dyed it herself. The colors remind me of lemons and limes in a bowl together, and I had been saving it for myself. But my pal said that green was her favorite color, and she lives in a climate that is warm all year, and requested superwash. So she'll get a pair of socks from this yarn. I keep telling myself that the best gift is one you wish you could keep for yourself ...

Anyway, it looked like this after I wound it:

The flash made it look more yellow than it is in person, but the photo sans flash was really blurry, and I hadn't had enough to drink yet to make it look acceptable. (Oh, also - isn't the swift pretty? I love it!)

is worth doing well, as the saying goes. Remember the post about my Shamrock Shawl, and how I had laid it out, only to discover that only the bottom part looked like there were shamrocks in the design? I kept hoping that blocking it would make a difference. But the more I thought about it, and looked at it, the more I was convinced that it was just a mess. So last weekend, I sat down on the floor with it, put a lifeline above the last pattern repeat that looked like it should, and started ripping! I had been on row 165 ... and ripped back to row 125. To be honest, I was kind of relieved and dismayed at the same time. I mean, it was already not right when I picked it up a couple of months ago to work on it again, so I should have ripped then (20/20 hindsight and all that). I realized that part of the reason I had been avoiding working on it, was because it didn't look right. And then also realized that if I was going to put all the time and effort into it, I'd want to end up with something I would actually use/wear. I haven't gotten back to it yet, but when I'm ready, at least it will be, too.

When I had talked about it, Melanie left a comment saying that she would like to see a picture of it sometime. To be perfectly honest, it had not occurred to me to take a photo of it, so that's another thing I did today: 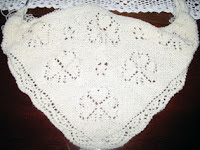 Above it, you can see a little bit of the table runner that Tim's grandma crocheted for us. She used to make really beautiful things, and besides this we have some crocheted placemats, and a gorgeous crocheted lace tablecloth, which is way too big for our table, but a nice thing to have. Gram O would just sit and crochet away while everyone was talking, and by the end of the evening, she'd have a runner, or a pair of slippers, or something else to give away. And when I met her, she was already in her late 80s. She died 4 months before her 100th birthday. Pretty amazing all the way around.

Fun in the sun

Tomorrow morning, we are packing up the car, picking up Sebastian and Karen at the train station, and heading to the shore for the day. We'll drive to Avalon, New Jersey - about an hour and a half away - and set ourselves up on the beach, probably until mid-afternoon or so. I'm looking forward to it, and seeing the ocean again, and people-watching. Of course, heading to the beach for us means slathering on gallons of sunscreen, sitting under an umbrella with hats on, covered up - kind of like people in the 1920s went to the beach ... but I'd rather use my ounces of prevention than not get a chance to ever go to the beach! Plus, there's the anticipation of frozen custard on the way home ...

I received an e-mail from someone, saying that they were really tired of hearing me talk about my cats, and posting pictures of them this blog. The writer was really incensed, and even made some comment related to me not having children. In response, I would like to say, if you are bored/offended/annoyed or whatever with anything here, stop reading! When I read a blog or an editorial or an article by someone that annoys me, my solution is to stop paying them any attention. And trust me, you don't want to get me started on other people's opinions of why I don't have children. (Because it wouldn't be pretty.)

And so, Annoyed Reader, farewell, and I hope you find blogs to read that only have pictures of knitting, children, birds singing, sunny skies, and all the rest. I sure won't miss you!

To everyone else, thanks for hanging around. I'll be back with more exciting posts and cat pictures soon ...
Posted by Bridget at 6:34 PM

What's with the boorishness in comments lately? Sheesh.

The shawl is lovely, as I hope your day at the beach is.

oh sweet baby g...if tim wears one of those old-timey swim suits like the kaiser wore, i want photos of hat...you read that assy chick who complains about reading someone's *personal* blog??...i would have e-mailed her a picture of your "sweet ass" if i were you bridge...;)

or at the very least tell her the reason you can't have children is because you're a dude...

No, the reason you don't have children is that you USED to be a dude.


Why, why, why would anyone take the time to leave such comments? I've gotten a couple, too.

If I went to the beach with you, I'd be the one in the full-length dress, huge bonnet, enough sunscreen to sicken an army, and a portable cabana from which I would not budge. Now you know why I don't go to the beach!

p.s. - I love the shawl! The shamrocks are so pretty -

i had someone tell me that they weren't going to read my blog any more because i was bigoted against southerners. (and i hadn't even used the word "cracker".) so i emailed 'em back and said something along the lines of "this may shock you, but I DON'T CARE if you read my blog."

by the way, i love the cat stories. i would dearly love to have a kitty but due to my husband's allergies i can't. i love to live vicariously thru yours. if someone else doesn't like it? **ck 'em.

p.s. maybe you can wear that beautiful shawl the next time you go clog dancing.

.. delurking to tell you how much I enjoy reading your blog. Please don't let the assholes get to you.

Hope you had a great time at the beach. I'm headed back home from the Delaware shore today - enjoyed great weather and lots of knitting.

Your fan must have way too much time if he/she resorts to reading blogs they don't like. I have a hard time keeping up with the blogs I like - which includes yours, cats and all.

Your swift looks just like the one I have. I love mine, the workmanship is beautiful, its easy to use, and no clamping!

I LOVE lemons and limes together, that's gorgeous. The shamrocks are lovely.

Your emailer is a putz.

I hope you had a terrific weekend.

I love emails like that. As if you live to please them. It's even more fun in real life, when someone accosts me on having cats instead of kids.

It's hard to rip but sometimes that's just what has to be done. And the shamrocks look like they're supposed to now.

yeah - what Carol said Assmonkey. Oh geeze I had to laugh at that. I guess they haven't found mine yet. I've got cats, dogs, a chicken and even an outhouse on my blog. The shamrocks are looking really good. The yarn for your socks looks like a cool frozen drink on a hot summer day. Very nice.