Not really, just a little Christmastime humor there (yeah, I know, very little). But I hope you are sitting down (and if you are, why not have a little drink?), because I have some knitting to show you. Most amazingly, it's MY knitting!! Three - count 'em, three - projects for your viewing, and my blathering, pleasure.

First up, two FOs (Finished Objects, for those of you who don't speak knitting): the Fetching mitts, and the Dancing Leaf Farm/Sophie bag. 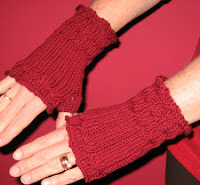 Pattern: Fetching, from Knitty, Summer 2006.
Yarn: Karabella Aurora 8. I used all of one ball, and about 3 yards of another. The color is listed as#2 on the band, and is described elsewhere as "Cabernet."
Needles: US 6
Started: September 2007.
Finished: December 2, 2007

I really like this pattern, though when I make another pair, I will make them just a tad longer, to go up my fingers above the knuckle just a bit more. I finally got another ball of yarn in the mail this past Friday, from Flying Fingers Yarn, after going to Sophie's Yarns on Tuesday, to learn that they had no Karabella at all! I had bought the original ball of yarn there, last December, and I have no idea where the ball band was. But I wanted to finish these, so I wasn't going to be picky about dye lot. Well, I think I may have ended up with the same dye lot, because you can't tell which is which! A nice bonus, no?

Here is my Sophie/Dancing Leaf Farm felted bag, post-felting. I really like the way it turned out, and other than trying to decide how to put a clasp of some type on the top, there was nothing else along the way that was a problem. I think I may give it to someone as a Christmas gift, though right now I have no idea who may get it.

Pattern: A combination of Sophie, from MagKnits, and the Felted Bag kit from Dancing Leaf Farm.
Yarn: The main yarn is Peace Fleece, in a dark teal shade. The accent yarns are Aloha, and Oh La-La, both hand dyed by Dalis at Dancing Leaf Farm.
Needles: US 10 1/2.

Finally, the WIP (translation: work-in-progress), which is my Clapotis (or as The Tim says, my "Chipotle"). It's sad when you are the organizer of a KAL (knit-along), and not only have some people finished, but some are on their second or third Clapotis since the KAL started in September, and this is all you have to show:

But I do like the way it is turning out, and I've actually made significant progress (for me at least) since being able to knit again after my hand surgery. I seem to zip along some days, and then others, I end up ripping out a row for every two or three that I knit. Needless to say, those are the days I put it away sooner rather than later. I like the pattern and the yarn I'm using, and I can't wait to get to the part where you drop some stitches because you are supposed to! (Now that's my kind of project ...)

Other than knitting, I did make a batch of cookies yesterday (oatmeal raisin with toffee bits), and got started (as well as nearly finished) with some of the Christmas shopping. Today we worked on some Christmas preparations around the house, and watched the Eagles game, which was, needless to say, tres disappointing. Trying to make lemons out of lemonade, at least the score was close, and not one of those losses where the score is so lopsided, it would have been better just not to show up at all.

Oh well, the important thing is that it's December 2, which means Christmas is on the way!

The Eagles were beyond disappointing! But, at least it was 3 solid hours of knitting in front of the t.v.!

I love your Christmas snowy thingy at the top - very cool! I'll have to check back on the pictures, though, because I only see little red crosses - don't know why? Your cookies sound yummy. I'm so glad your hand is healing well enough to allow you to do some of your knitting - but don't overdo it!

Fetching came out nicely - and the purse is too too cute! Great job. Pretty color choice for the Clapotis - it will look nice with lots of colors.

Good for you on the FO and continuing to work on Clapotis while preparing for the holidays. I've not touched mine, but I am on my last boring hat. Next up - a couple interesting hats. :) The Christmas shopping is done but nothing is wrapped and my house is a train wreck. So what did I do today? I canned applesauce of course! Love your Fetching, another project I can get out of the queue. As far as the Eagles go, well...I'm a Patriots fan (being born in Boston).

Cute bag. I like your clapotis too. That colorway is really pretty.