Do You Hear What I Hear?

If you do, I apologize ... it's me coughing my head off. And the only thing more annoying than hearing it, is being the one coughing, trust me!

So last week, The Tim had a really awful cold. He was just dragging to work each day, and then coming home and basically crashing. Oh, poor The Tim, I thought. But hopefully he'll feel better by next week, so he can feel back to normal by Christmas. Lucky The Tim, he is recovered, and Christmas-ing away.

Apparently, just catching his cold was not enough for me. No, I had to get the sore throat, upset stomach, fever, and who knows what else to go with it. And, like him last week, I couldn't miss work this week. So I dragged myself to work, and yesterday was our Christmas party/luncheon, and I made it through that. Then I came home, changed my clothes and went to bed! Since then, I have alternated between feeling kind of OK, and being sure that I am in my last moments. I had to cancel with a friend for tonight, whose Christmas party we always attend, and that was really disappointing. And I'm pretty sure now that my cough has become bronchitis.

Fortunately, I am having more with-it moments today, and have been able to function better. I do have some prescription cough syrup from a previous bout of bronchitis, and that is at least keeping the coughing somewhat under control.

But the whole thing is annoying, you know?

Now that my whining rant is finished, I can say that we did go to two concerts this week which were great (and since my cough wasn't too bad at that point, I wasn't even impersonating a lousy tuba). The one on Tuesday night was a Holiday with Brass and Organ concert, featuring members of the Philadelphia Orchestra, which is always a treat, and even more so at the holidays for me. Wednesday night was Sebastian's school concert, and they did an awesome job! Plus, Seb looked very cool in his new shirt, tie, and cuff links, and since he was in the first row, we could see him the whole time. (He could probably see us, too. Hm, maybe not so thrilled?)

But stay tuned, because ...

As requested (well, at least by Claudia), I have been taking pictures of some of our Christmas decorations for your viewing pleasure. I'll post them over the next few days.

In the meantime, I leave you with this picture of the Anthropologie store in Center City Philadelphia. The building is an old mansion, and the main entrance is actually around the corner from this side of the building. But this is their holiday decoration, and though from far away, I couldn't figure it out, upon closer inspection: 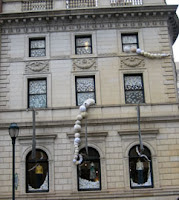 I saw that those "things" hanging from the second and third story windows are varying sized balls of yarn! It's really pretty cool-looking, and if the battery in my camera hadn't died right after I took this shot, I would have tried to get a close-up. (I'm guessing it's extra-extra-extra bulky weight ...)
Posted by Bridget at 10:37 AM

So, are the snowballs of yarn looking for a way in? Or a way out? Inquiring minds and such.

Poor The Tim. Poorer The You. Anything at all I can do?

I'm sorry you are under the weather. Good excuse to stay in bed and read/knit all day! You might be interested to know that a couple of weeks ago I was scurrying past Anthropologies and saw a whole bunch of knit items - they looked like food and utensiles. I didn't have time to do more than a double take. BTW, is Sebastian your grandson? I hope you feel better very soon.