The Garden Kitty says thank you to everyone who left such nice comments on his suggestions for a relaxing way to spend Christmas Eve.  As you may guess, he is quite the expert on finding ways to avoid stress.  (For instance - never leave the house!)

When we left things here at Chez Ravell'd Sleave, we were preparing for some snow, and wondering if it would be a big snow as predicted, or just a dusting, as often happens no matter what the predictions.  Well, the answer is:

Yes, it messed up a lot of people's travel plans, and for that I am sorry, because I know when I have been traveling and something like that happens, it's not just disappointing but can be extremely frustrating and stressful.  I truly hope that by now those people who were trying to get from point A to point B have arrived safely, or are at least on their way.

For us though, it was a great day.  The Tim is generally off on Saturdays, so we had a nice day together, baking, finishing up on some decorations, watching movies, and just generally enjoying Christmastime and watching the snow.

Tess and GK occasionally would look out the window at the snow falling, but otherwise they were pretty much of the been-there-done-that school of thought.  Not Jetsam, however - he was AMAZED at what was happening outside!  He is also of the belief that anytime anyone even walks past any of the doors to the outside, that he needs to go out and investigate.  Since he has never experienced snow like we were getting, we opened up the door out into the garden, and he was all set to bound outside BUT - wait, what was that white stuff that was already up to the door sill??  He was slightly dismayed, as it was cold and somewhat wet, but being the optimist that he is, he just decided to jump over the stuff in front of the door to get to the garden.

Except ... there was cold and wet everywhere - and it was even falling from the sky on top of him!  He was truly puzzled, and for the first time ever, something was actually bothering him.  He decided to go under the car in the car port.  But guess what?  It was wet and cold there, too.  Hmmm.  So he tried to round the corner to come back inside.  Except that cold, wet, white stuff was blocking the way.  He jumped onto the wall of the car port, which at the time at least, was less snowy than everywhere else.  Trouble is, there was still A LOT of snow between there and the door, and it was up to his chest, just like the snow he'd tried to get away from ... So he had no other choice than to leap into it, and then leap back into the house.  It's one of the few times he has willingly come in from the outside!*

Oddly enough, he has not been to interested in going back outside the past few days ...
;-) 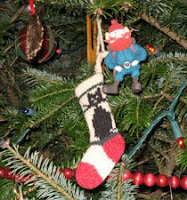 In other news, we now have Almond Butter Toffee added to our homemade goodies, and last night I mixed the ingredients for Holiday Cheeseball, which I will put together this evening (the flavors need to blend together for a bit).  We will be heading to the grocery store today or tomorrow for the ingredients for our Christmas Eve and Christmas Day dinners.  I have a few stocking stuffer type things to get, but otherwise we are as ready as we're going to be!

*I'll have pictures someday when Photoshop is restored to our computer ... sigh.

(You can click on the item to enlarge it.)

This means so much to us, not just because of its content. Briton played Virginia's father in a production of the play.

This means so much to us, not just because of its content. Briton played Virginia's father in a production of the play.

Did you see the latest Simon's Cat? It could be about Jetsam's adventure!

As a young girl, I thought that letter was written to the WHOLE state of Virginia... It always tickles me, because of that.

Love the Santa article, where is it from?

Ah! How did you know I needed that Sun column this morning? Thank you!

Snow! I'm so jealous. Enjoy it!

You made Almond Toffee Brittle AND your famous Cheese ball ~ I'll be right over!

Wishing you, The Tim, and the whole gang a very Merry Christmas!

Ready? What does that mean? Have a great time, you, The T man, and the Fur Patrol.

I'm glad you have the snow and not us! Have a very merry Christmas, and may you always believe in Santa Claus!