Before I go any further, a couple of people wondered where the "Yes, Virginia" letter in my last post first appeared.  Here is the story of that now famous letter to the editor and the response.  Every year, this makes me happy that I still believe in Santa Claus.

Eight-year-old Virginia O'Hanlon wrote a letter to the editor of New York's Sun, and the quick response was printed as an unsigned editorial Sept. 21, 1897. Francis Pharcellus Church was a war correspondent during the American Civil War, a time which saw great suffering and a corresponding lack of hope and faith in much of society. Although the paper ran the editorial in the seventh place on the editorial page, below even an editorial on the newly invented "chainless bicycle," its message was very moving to many people who read it. More than a century later it remains the most reprinted editorial ever to run in any newspaper in the English language. (see it on the original page here)

So here we are, on Christmas Eve.  I would like to ask you all to say a special prayer today for my friend Carol and her family, as Carol's father passed away yesterday.  Any of us who has lost someone knows that no matter the circumstances, when it actually happens, it doesn't seem like it can be true.  And as some of us know, losing someone in your family during the holiday season is extra hard.  I'm sending my love out to Carol and her family, and I hope that you will keep a good thought for them as well as you enjoy your own families on this holiday.

We are ready for some company for Christmas Eve dinner (Karen and Sebastian are coming -YAY!), and of course for Santa's visit later tonight.  The Tim is working today, but for a change has the earlier shift, so he will be able to come home late this afternoon and sneak in a nap before the festivities begin.  (The kitties are napping as I type this, since they firmly believe that there is no such thing as too much rest.)  Tomorrow will be a day at home, enjoying Christmas Day, and talking to our families over the phone and/or Skype. 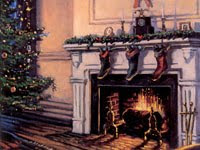 From our house to yours, Happy, Merry, Joyful Christmas Eve and Christmas Day!  May Santa treat you well, and may blessings from whoever/whatever you believe in come to you and those you hold dear. 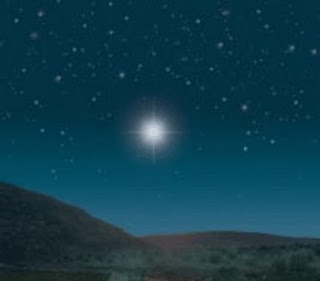 And the angel said unto them, Fear not: for, behold, I bring you good tidings of great joy, which shall be to all people.

Have a wonderful, peaceful Christmas.

I am so sorry to hear of Carol's sad news. My condolences to her and her family at this difficult time.

I got your card in the post today, which was a lovely thrill. I'm such a luddite that even though I'm "talking" to you now, I really appreciate the effort that writing and posting a card involves.

According to Norad Santa Tracker http://www.noradsanta.org/en/index.html the Big Man has already been on this side of the pond, so it's time for his elves to pack it in and get forty-winks before we're woken at the crack of dawn!

Prayers to Carol and her family. I always feel guilty enjoying the holiday when I know someone else is raw with grief... but such is the circle of life.

Merry Christmas to you and yours!