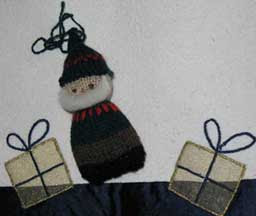 Isn't this little guy cute?  He is the Yule Woodsman, and this picture is from a couple of years ago, when I knit one for a holiday swap I had joined.  Every year when I pull the one I made for us out of the decorations box, I tell myself that I am going to make more of them (I have everything I need) for gifts, and so far ... zero.   Just another reason why it's good that Christmas comes every year ...

Today I realized something that I have decided is a result of the recession, but is actually a positive thing.  It's already December 6, and so far I haven't heard a single person complain about Christmastime, or the commercialization of the holiday, and whatever else people get worked up about during this time of year.  Granted, I haven't been much out of the house in the last week to interact with others, but I haven't even read many complaining blogs.  Which makes me think/hope that people are treating Christmas positively.  I'm sure that there are still plenty of Scrooges, and materialistic people who will complain that they don't have enough money to buy "nice" (read: expensive) gifts, but overall, it seems to me that a certain degree of reason has entered the equation.  Not meaning to sound like a Pollyanna, but apparently there is one good thing coming out of the fact that people are more strapped for money than they may have ever been before.

If you are looking for something that will make you smile and also help you get into the Christmas spirit, I can highly recommend Creature Comforts - Merry Christmas Everybody.  We watched it last night, and it was hilarious!  If you aren't already feeling happy about Christmas, this will only improve your mood.  It's from Aardman Animation, the same folks who created all of the Wallace and Gromit movies.  I'm not a big fan of claymation, but Aardman's work is an exception, as far as I'm concerned.

On the knitting front, I have added two of the projects that I've completed recently to my Ravelry projects page.  However, the computer is denying the existence of Photoshop, so I have not been able to add the pictures yet.  Frustrating, but no big deal in the scheme of things.  They'll get there eventually.  I have about a quarter of one project left, and then two other projects to do, both of which should be fairly quick knits and not all that complicated.

As I predicted, I have not done as much reading as before, but I am enjoying The Plum Pudding Murder, which I started the other day.  Though I must admit that it is making me hungry ... But it's light reading, which is just right for me at the moment.  And of course it takes place at this time of year, which is of course why I had put it aside until now.

This week will find us getting our tree and decorating it, baking, wrapping gifts, and I will of course try to make more progress on my knitting.  The up side of not working is the time to do these things.  The down side is of course worrying about finances, and not having any sense at all of any kind of security even for the immediate future.  However, I'm trying to make a conscious effort to not worry any more than I usually do, and just enjoy Christmastime while it's here.  Sadly, I know there are plenty of people in much more dire straits, who don't have the luxury of not worrying at all, so I'm actually pretty lucky.  It's good to be reminded of that, especially now.

Perhaps the best Yuletide decoration is being wreathed in smiles.

Hang in there, Bridget!

And I agree that this year everyone seems to have wanted (needed, perhaps?) the Christmas season and spirit to arrive early. I'm glad, too.

Well I was already in the Christmas spirit but your post just boosted me up a little more. Thanks.

I love your little woodsman! I have noticed that there is less complaining about the holiday season! I usually one of them, but you're right, it's different this year! As my grandmother would say, "You can't get blood out of a turnip"- and you can't get money out of my empty wallet! Take care, and happy holidays!

Really? The holiday preparations are passing us by - and by us, I mean me and MJ!

It's lovely to be able to enjoy all the season has to offer. It's a celebration of all we've acheived in the past year. Next year will look after itself.

I have to say, I haven't felt much Christmas spirit this year, but I'm getting there! Snow! That's what we need... And more posts like yours. :D

Bridget- I love Creature Comforts. Have you seen "A Matter of Loaf and Death"? I think I weed myself laughing.