Rhineland's a Fine Land Once More!

"And now it's Springtime for Hitler and Germany,
Rhineland's a fine land once more!"
(from "The Producers" - lyrics by Mel Brooks)
I never got around to seeing the stage version, but "The Producers" is one of my favorite movies.  Ordinarily, I can't think of something related to knitting that might remind me of not just the movie, but this song in particular.
That is, until I started - and finally finished - this project: 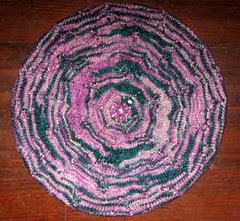 I love this pattern, "Springtime in Philadelphia," and have wanted to make it for a while.  I got it in my head that I would use this yarn for it.  For all of the yarn's "issues," I have to say that the color variegation covers up a lot of mistakes, so for that reason, I'm really pleased with the finished item.
I originally bought this yarn because the colorway is called Brookland, and that is the neighborhood in DC where The Catholic University of America is located, which is where I went to library school.  The colors appealed to me as well, and the fiber content (spun silk) is so soft and shiny, I thought it just really needed to come home with me.
Never never ever ever again will I buy this yarn.  Not. Ever.
It all started when I went to wind the yarn.  I was at Rosie's one Sunday, and had brought it with me, figuring I would wind it there, saving me the process of getting my swift out, clearing a table to use it, etc.  Almost immediately, it started tangling from the skein while I was trying to wind it!  My co-worker, Andrea, offered to try and untangle it, saying that she enjoyed that activity.  Well, yeah, until she met this yarn ...
Splitty, sticky, knotty - those adjectives don't even begin to describe it.  Ugh.  And thus it became my very own "Springtime for Hitler" beret ...
Details:
Pattern:  Springtime in Philadelphia, by Kate Gagnon Osborn
Yarn:  Penthouse Spun Silk, by Neighborhood Fiber Company, colorway "Brookland"
Needles:  US 2 and US 0 (circular)
Started:  May 3, 2010
Finished:  June 20, 2010
Comments:  Love, love, love the pattern!  Hate the yarn.  Pleased with the end result, though, and it actually fits my humongous head, which is nice.  I will definitely try this again with a solid yarn, which will also be nice because now I "get" the pattern, so there won't be as many times that I need to rip back (at least in theory).  Part of the reason it took so long is because there was more than one occasion that I had to rip back quite a bit and re-knit it.
And - I finished it on June 20, which was the last day of spring!  You remember spring - the season that used to come between winter and summer?  Yes, beautiful days, cool nights, occasional rainy days.  Good times ...
Posted by Bridget at 8:02 PM

Very pretty. I haven't tried the spun silk (and probably won't), but I have knit with the Neighborhood Fiber Co. two sock yarns and can recommend them. I hope this bad experience won't keep you from all of her lines.

I got a skein of difficult yarn once. It got so tangled I had to snip and splice. Pain in the behind. Love the beret.

Purty! Are we going to get a modeled shot? I'll be careful around that yarn, should I ever come across it.

When were you at Catholic? I played basketball at Trinity, and we used Catholic's co-rec center as our court...

Good for you for pushing past the knots and such and finishing. Don't you wonder how some of these yarns/companies manage to have a single repeat buyer?

So, you think you'll ever use that yarn again? Tee hee.

Wow! Lots of karmic threads coming together on that one!

I love it! And you know, I have a forever damned and banned yarn as well. One that tangled and pulled and knotted - every.skein.I.purchased. All 11 of them. I've never used the yarn, so you're one up on me.

I saw that on your Ravelry picture page, and wondered about the Hitler thing.

It would have suited him. I think.

Thanks for the Producers connection too funny.
The beret is loverly and hopefully fall will return to all its standard beauty and you will get to wear your beret.