Just a little while ago, The Tim and I got home from saying goodbye to our Garden Kitty.  The shock of it makes it still seem not real.
A little more than a month ago, it seemed that he just didn't feel too well. He was mostly his usual self, but had problems with the litter box and threw up pretty frequently, which for him was unusual. I took him to the vet, and she weighed him, and he had lost 5 pounds within a 2 year period, which is a lot for most cats. They did blood and urine work then, and nothing looked too much out of the ordinary. She suggested we change his food, in case he had something like irritable bowel syndrome, and if that didn't help, suggested an abdominal ultrasound. We knew it might not bring good news, but were hoping it would be something that could be treated even if a chronic condition.
By the time I took him to the vet this morning and dropped him off, he had clearly not been feeling well for a few days, and had also clearly lost more weight. He didn't seem to be in pain, which I am grateful for, but he was not his usual self. The vet called and talked to The Tim (who didn't have to be at work until this evening), and said that Garden Kitty appeared to have cancer that had spread even to his lymph nodes already. She said that if we wanted her to prescribe steroids to keep him comfortable, or anything else, she would, but that he was very frail.
There was no way we wanted our sweet boy to have to linger any longer than necessary. So we made one of the saddest decisions anyone has to ever make. We took a few of his favorite toys, and he seemed very happy to see us, and them. We talked and sang to him like he liked, and he purred up a storm. When the vet finally gave him the injection, he was relaxed and knew that we were there. I've said it before, and I'll say it again, but we should all be so lucky to have our last moments be with those we love, and who love us.
So if you will, give any of your family members - of all kinds! - a special hug, pat, or kiss tonight.  And keep a kind thought for the Garden Kitty.  I know he'll miss us, but he has a lot of company in heaven to cuddle with and play with and love.  Words cannot describe how much we will miss him, but we do take comfort in knowing that he knew he was loved, and that he'll never really be gone from our lives and our family.
And I don't think William Shakespeare would mind that I use something of his to suit my purposes.  So I can only say, 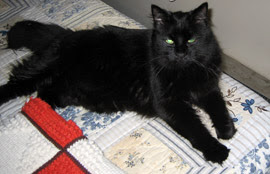 "Goodnight, sweet Garden Kitty boy, and may flights of angels sing thee to they rest."
We love you, baby boy.  Always.
Posted by Bridget at 7:27 PM

A very sweet tribute to Garden Kitty. I'm sorry for your loss.

Safe journey, sweet Garden Kitty- and many hugs to you and the Tim. I am so sorry.

Oh Bridget, I am so sad for you and Tim.

Good bye Garden Kitty, I am sure you are in a good place, free from pain and feeling whole again.

Oh Bridget, so, so sorry for you and Tim. Peace to Garden Kitty.

I'm so sad to hear about Garden Kitty. I remember what a sweetheart he was to me when I visited you. It's so hard to make these decisions for the dear furry friends (friends? who am I kidding? close kin is more like it) who can't talk to us about their feelings about end-of-life issues. I dithered for weeks during Melissa's final illness, and then I heard that an oncologist I knew had died two weeks after he'd been told that the chemo for his cancer wasn't working. I knew instantly that he had arranged his own death. I had talked to him enough to know his death was deliberate. I thought, "J knew better than most people the pain of dying of cancer, and he chose not to go through it." And then I thought, "This is what J wanted, and this is what I want for myself. Can I do any better by my beloved cat than to give her what I want for myself?" And still it was so hard. I hope you'll find comfort in the thought of the good life you made for Garden Kitty. If anyone deserved a flight of angels, he did.

Oh, sweetie. I'm so sorry. It's the cruelest thing about loving animals that they leave us far too soon.

Sending you hugs from D.C.

Oh Bridget... Artemis, Toscabelle, Ajax and I send our love and condolences. We know that Garden Kitty is in the garden of cat delight with beautiful sunbeams to nap in, butterflies to chase, koi and mice for snacking, and companions for the occasional romp and ear grooming.

I'm very sorry to read this and I will certainly give Rufus a scritch behind the ears and a big hug.

(I will wave at Hamwich because she's a biter)

Oh, Bridget...I am so sorry. Will hug my three in Garden Kitty's honor. And our Charlie will be there to greet him at the Bridge.

Such a sweet post for your GK! I'm so sorry for your sadness and your loss!

So sorry that GK has passed. I remember your late day when you found him in the box out with trash. You and the Tim gave him a wonderful life.

Bridget- I am sorry for the loss of your beloved boy. I know how it feels.

A little misty here, and I had to skip a few paragraphs, because our Freddy's end was FAR too similar. I really, REALLY hate cancer.

(Ironically, Fred reported yesterday that on the other side of the Rainbow Bridge, he has no interest in chasing cats, so I'll tell the boys to invite him to their cloud. They're having quite a party there with all of my friends' pets...)

Big hugs to you and The Tim. Are the other kitties sad?

I'm so sorry to hear that you lost Garden Kitty. It's so heart-rending when you have to give the nod to letting them go. Your other kitties will fill in as best they can, but I know you'll always miss him. I tried to write this earlier, but I was weeping and I couldn't see the computer screen. I never did believe that God would deny our pets access to heaven and, if there is such a thing and I make it there, I know I will see all our family's pets again, just as you will see GK. Oops! My eyes are leaking again.

Crying here. But extending hugs and shoulders --- take your pick.

I'm so sorry for your loss. I have always thought we are much kinder to our fur babes than we are to humans when their end draws near. Garden Kitty crossed over with dignity, knowing he was loved. Big hugs.

I'm glad I had a chance to meet that sweetheart of a kitty a few months ago. I still miss my departed kitty friends and am sending lots of love your way but I like the thought that maybe Bradley and Beulah and Garden Kitty are all playing together right now, or maybe snuggling up together for a nap. Beu was shy and she would probably be very sympatico with GK. I know you feel like you were lucky to have him as part of your family; believe me when I say he was as lucky to have you.
xoxoxoxo

Having just made the same decision, I cried through the telling of yours. I'm so very, very sorry for your loss. And I'm so proud you were strong enough to do what was right for Garden Kitty. It is hard, isn't it? g

I feel terrible for you both. Just such a sad thing. It was a blessing that you were both strong and could both be with him and comfort him to the end. {{hugs}}

Oh Bridget, I'm SO sorry abt Garden Kitty. It's the worst part of being owned by them.....

Oh, Bridget, I'm so sorry. It's for the best for him but it still hurts like hell to have to make that kind of decision.

The Garden Kitty was such a sweetheart. He was so lucky to have you and Tim as his mom and dad. We love you all and send our love. Amanda

Oh, Bridget, I'm so sorry. But you guys were so loving. Riley sends love and condolences to Tess and Jetsam.

Bridget, I'm so sorry. That's a very hard thing to have to do, but sometimes it just has to be. I bet he's chasing bunnies someplace.

Oh Garden Kitty, you must be so happy now, being able to eat what you want, and sleep where you want, and poop where ever you want too. Always look over your Ma and Da', ok?