The Best of Dogs 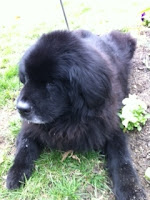 Sometimes your heart just gets broken; not because you actively caused anything to happen, but just because the universe took charge.  This has been the case for us this past week.

If you have ever met me, talked to me for even less than five minutes, or read this blog more than just right now, you know that in our house, Doughboy was *the* dog.  All of us love him (the kitties have a different way of showing love, ahem ...), and I have always thought of him as my canine soulmate, so to speak.  As I've told friends on more than one occasion, we would often call him our "part-time dog" but we love him full-time, that's for sure.

We have been looking forward to some Doughboy time that was coming up.  He was going to be with us this Easter weekend, and then again for a whole week in another few days.  We couldn't wait for him to meet Pip, and I especially was looking forward to many pleasant walks.

But the week before last, we got a phone message from Ben saying that he wasn't doing too well.  He had suddenly gotten sick, and the vet said he had "old dog vestibular syndrome," which is similar to acute vertigo.  Apparently it is usually self-correcting in a few days, but Doughboy hadn't really improved.  Then a day or two later I got an e-mail from Halden, saying that he was really not responding much to anything, and that the vet said that if he didn't improve by this [just past] Tuesday, that he wouldn't be likely to recover at all.

A week ago this evening, Doughboy died.  Thankfully Ben was with him, which is a major comfort to us, as I'm sure it was to Doughboy, since Ben was "his" person, and they were incredibly devoted to each other.**  To say that we are sad here at Chez Ravell'd Sleave would be the understatement all time.  Not just said for the loss of the best dog ever, but also for Ben, Halden, and little James, who now have a gap in their household.  I am truly grateful that Doughboy did not suffer, or linger being sick for weeks.  I would have loved to stroke his head, kiss the top of it, and shake his paw one more time, but he was too sick to notice, and I am too much of a basket case at a time like that to do anyone any good.  I know I would have only stressed him out more, and probably upset everyone else even more than they were.

But you know what?  I know what he feels like, and smells like, and liked to do.  I know I will unlikely ever have a friend like him again.  I know that he is in heaven, where Abigail is showing him the ropes (he was with us the day she died, and they were sharing his doggie bed!), and Tess is batting his nose to keep him in line.  I know that he loved to come and stay with us, and was better behaved than most children I know.  I know that the Garden Kitty is shocked (no news there), but now truly knows that he doesn't need to be afraid.  I know that Doughboy is back to himself, feeling happy and, though missing his family, still watching over them.

I know he had a happy life, and was greatly loved.  I know that when I was recovering from two cancer surgeries in a five-month period (that was when he and Ben first moved in next door), taking him for walks was the highlight of my recovery, and having him to cuddle was some of the best medicine ever.

I know I miss him beyond words.  He was quite simply, the best of dogs.

So please, if you will, say a prayer for Doughboy, his family, and give your family members (regardless of species) a hug.  I hope that your Easter weekend will be free of any heartbreak, and full of good memories.

Ben, Halden, and James - thank you for letting us be so much a part of Doughboy's life.  He made ours so much richer with his sweet pup presence.  Everyone should be so lucky!

One of my favorite pictures - Doughboy the "lap dog" in Tess' bed,
while she stares him down with death ray glances ...
**(As a matter of fact, I don't know anyone who has ever taken as good care of a dog, as Ben did for Doughboy. He has set the bar way over everyone else's head.)
Posted by Bridget at 3:51 PM

Peace to you all, and godspeed to Doughboy.

PS, the book got here and I'm loving it. Thanks so much!

Boo hoo hoo... Big, hot tears... but Gretchen is pressed up against me, licking and loving...

Sissy will care in a moment... her person just left the house when she thought they were going to snuggle all evening.

Clearly, you have known the love of a very good dog. I hope Doughboy meets up with my sweet boy dogs over the rainbow bridge.

PS - Sissy even stopping stomping and pouting and looking for the Knight long enough to send her own licks and love.

It's so sad when a furry friend dies, but I'm with you: I believe that, if there is a Heaven, then all God's pets go there. I'm fully expect all mine to be there, if I'm so blessed at my passing. I had tears, Bridget.

What a wonderful remembrance of Doughboy. I will miss seeing and hearing about him on you blog, though not nearly as much as you and Ben and family will miss Doughboy.

Love the picture of Doughboy in the cat bed. I can see why it is one of your favorites. Hugs to you, take care.

Oh Bridget I'm so sorry!!! this is the worst part of being owned by our furballs. Hugs to you and yours.....

What a lovely tribute to Doughboy. I like what Marie said about Heaven -- all of our pets will be there and we will see them again, without sickness or pain. Please know you are in my thoughts and prayers.

Awww, I'm so sorry for yet another hole in your family this year. Sending hugs your way...

I will miss Doughboy terribly, much love to his family and to you and The Tim.

I am so so so sorry. Losing a pet is losing a family member. It's just so devastating. My thoughts are with you.

I didn't realize the computer was logged with my husbands login, so although 'L' sends you hugs, the big hugs were coming from me. Hope you're feeling better!

So sorry about your doggie, I'm sure that he will be with you in many ways for a long time.

Bridget- I am SO sorry. He was indeed a great dog, and I know you will miss him.

Oh, Bridget. I am SO sorry.

Oh, Bridget. Sometimes the universe just sucks, doesn't it? I'm glad that he didn't suffer but I'm really sad that he's not around to love.

Bridget, I'm so sorry to hear about Doughboy. I know he was a really special dog.

:( Oh Doughboy! You be a good boy up in doggy heaven! I know you will be. Make sure you look after your human family from above, which I'm pretty sure you are.

<3
(Hard to think of something touching sweet or poetic to say through the tears....)